Texans face greater risk of heat, drought and hurricanes, but Abbott administration has no plan to tackle future threats of climate change

The state’s silence stands in contrast to governments across the world tackling climate change at a UN summit in Scotland. 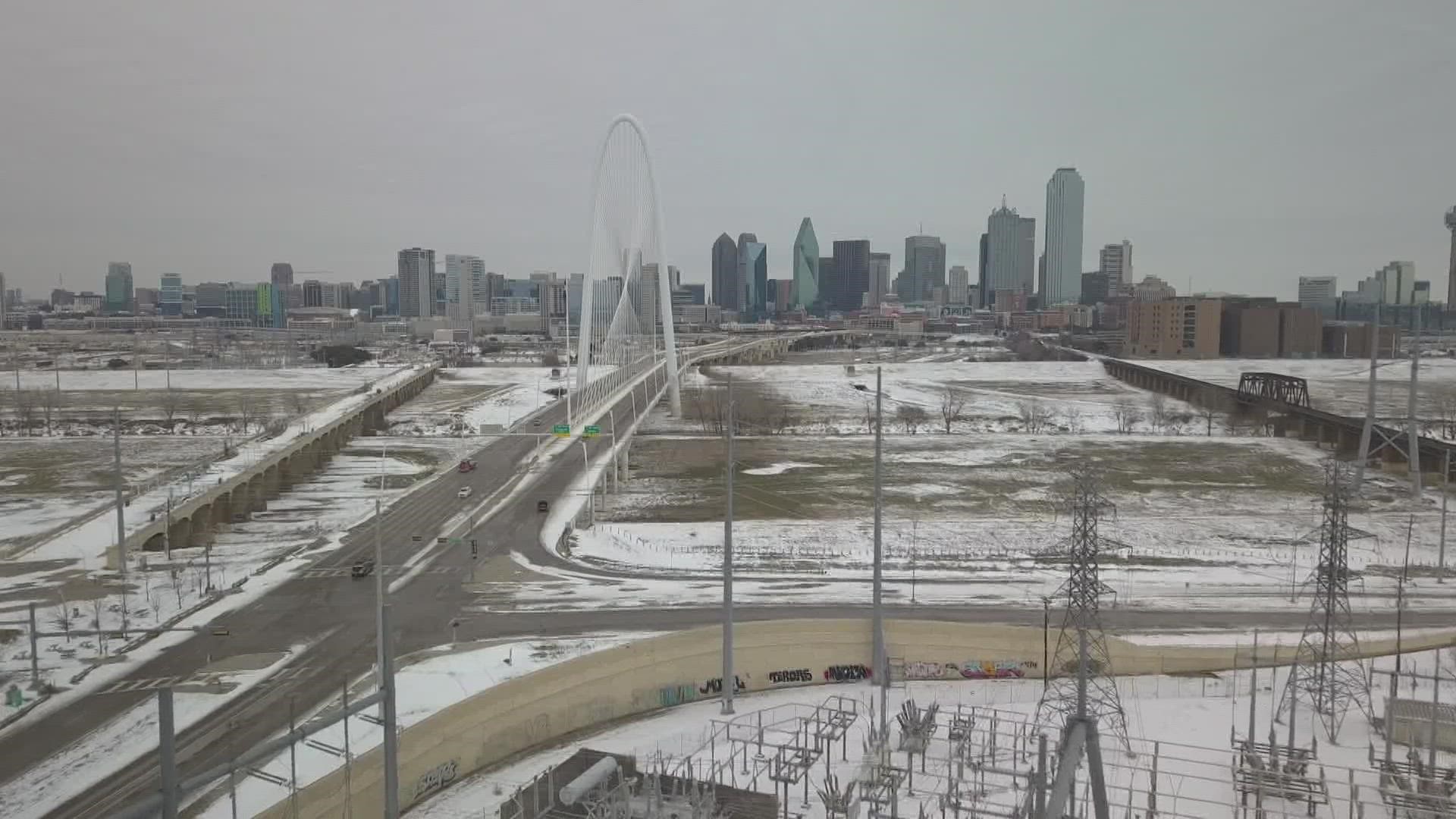 DALLAS — Watch the story tonight on WFAA at 10.

While the science on climate change is unequivocal – that Texas will face a future of more extreme heat, drought, fire and hurricanes – Gov. Greg Abbott’s administration has no policy on how those risks will impact Texans or how to mitigate them.

Abbott’s position stands in stark contrast to agencies, like the United States Department of Defense, which considers climate change a "threat multiplier" to military operations, and to the efforts of world leaders gathered at the United Nation’s COP26 Summit in Scotland to negotiate rapid cuts in greenhouse gas emissions.

In Texas, at least 210 people died in the cold and dark during the February 2021 winter storm. It was the most expensive disaster in state history.

Like a set of dominoes, the extreme cold created a cascading effect. For example, when power plants froze that meant some water plants, running on electricity, did not have the power to pump water. Without water, the National Guard resorted to airlifting bottles of water across the state.

A widely-reported paper in the journal Science indicates the domino that started the cascade was likely climate change. In it, scientists draw a connection between climate change and the likelihood that arctic temperatures could sag all the way down to Texas.

“It's all tied together. Everybody has to worry about everything,” said Dr. John Nielsen-Gammon, a professor at Texas A&M University and the Texas State Climatologist, talking about the risks of climate change.

Does he think that officials responsible for mitigating against future risk must consider climate change in their planning?

“If you're dealing with risk that is weather sensitive, then yes,” he said.

Planning for the Future of Texas

In 2011, Texas was hit with one of the worst droughts in history. Farmers and ranchers sustained $8 billion in losses, 300 million trees died and it was the worst year for wildfires in state history.

How long did it take farmers to recover from that devastating year?

“It may be two years after the fact, hopefully, if things go well, before you come back to even to recuperate what you lose in that year,” said John Paul Dineen, a farmer in Waxahachie.

So, what is the state of Texas doing to prepare for future droughts?

Bois D'arc Lake, in Fannin County, is the first major new reservoir in Texas in 30 years. It takes a long time to develop a new water source, like this. That’s one reason the state's water plan looks 50 years into the future.

The mission is to always have enough water in case of a drought that's as bad as the worst drought Texas has ever had, called the drought of record.

But in a scientific research paper called Unprecedented Drought Challenges for Texas, Nielsen-Gammon and others conclude, because of climate change, future droughts are likely to be worse than the drought of record.

Should the state be planning for that?

But the Texas Water Development Board, whose commissioners are appointed by the governor, has no policy on how climate change could impact the state's future water supply.

Chairwoman Brooke Paup declined to be interviewed for this story. However, in a statement, a representative wrote, "...planning groups and local water providers have the flexibility to consider, balance, and address a variety of potential risks and uncertainties, including the risk of a drought worse than the drought of record.”

In other words, helping Texans navigate the risks that climate change will pose to their water supply is not the board’s job.

On this week's episode of Y'all-itics, David joined the Jasons to talk about the climate summit, and the possible impacts for Texas.

We found the Water Board is one of 10 major state agencies -- all run by commissioners appointed by Abbott – that do not have a policy on how climate change impacts state operations.

More extreme temperatures will likely increase the demand for electricity, according to the U.S. Environmental Protection Agency. It could also hamper how energy is produced and delivered, as Texans saw last winter. But the Texas Public Utility Commission, responsible for keeping the lights on in Texas, has no policy on how climate change will impact the reliable energy Texans count on.

In a statement the PUC writes: “Texas has always had highly variable weather, so there is no one-size-fits-all solution. However, any policy decision needs to be made on sound science and data...”

Climate Change degrades air quality and increases ozone levels, according to the EPA. The Texas Commission on Environmental Quality is responsible for maintaining air quality, but has no policy on how climate change will impact the air Texans breathe.

In a statement the TCEQ writes it, “…uses air monitoring data and a variety of other inputs to develop future projections for air quality in Texas. That said, the agency does not use climate change projections to evaluate future impact on air quality.”

In a statement, TDEM writes that it “uses various professionals, organizations, and models to study weather and weather patterns that may impact Texas…” and “…takes an all-hazards approach to preparedness and is ready to respond to all disasters whether natural or manmade.”

Guidance from several federal agencies says extreme rain, heat and drought caused by climate change can disrupt transportation systems. The Texas Department of Transportation, responsible for the state's roads and bridges, says it takes steps to harden its assets against extreme weather conditions, but it has no policy on how climate change will impact overall mobility in the future.

In a statement, TXDOT writes it has “a combination of programs and projects that are adaptable and flexible to keep our system resilient to changing conditions of flooding, sea-level rise, extreme heat and drought. Some of these include: updating models and design standards for roads and bridges that are susceptible to extreme weather; efforts to reduce flooding, soil erosion and water pollution; an investigation team that evaluates pavement affected by extreme heat and drought; and more consideration of extreme weather events during project design and maintenance activities.”

Heat-related illness, asthma and allergies are getting worse because of climate change, according to the Centers for Disease Control. But the Texas Department of Health and Human Services, responsible for improving the health, safety and well-being of Texans, has no policy on how climate change impacts that mission.

In a statement TDHHS writes it “does not consider climate change for our projections and we do not have a policy regarding climate change.”

A report from Columbia University Law School finds climate change “will strain the already overburdened U.S. correctional system and imperil the health of inmates and penal employees alike…” The Texas Department of Criminal Justice, which houses inmates and employs prison workers in facilities without air conditioning, has no policy on how climate change impacts the agency’s mission.

In a statement the TDCJ writes it “…works closely with other state agencies on climate projections to make operational decisions,” however none of the agencies it mentioned have a policy on climate change.

The National Parks Conservation Alliance says “climate change is the greatest threat the national parks have ever faced.” Texas Parks and Wildlife is responsible for managing and conserving the natural and cultural resources of Texas for future generations. When planning for the future, TPWD says it does take into account environmental changes, but it does not have a policy on how climate change impacts its mission.

In a statement, TPWD writes it is “… continually reviewing how a dynamic climate impacts park lands for Texans, especially since public use and outdoor recreation facilities are so connected to the natural environment. When planning for the future, we consider several environmental factors, including increased flooding, sea-level rise, and stronger heat waves and winter storms. In addition, our agency has identified resources conservation strategies that are required to be considered with every new construction project to assure sustainability.”

Experts warn that insurance providers face increased risk and exposure from more frequent catastrophic events. The Texas Department of Insurance, which regulates the business of insurance, has no policy on how climate change may impact the insurance industry.

On multiple occasions WFAA requested an interview with Governor Abbott asking why his government has no formal plans to address the risks Texans face from climate change. His office did not respond.

By contrast there is the example of Texas Forest Service, responsible for protecting and sustaining the state’s trees and forests. It’s run by Texas A&M University and its leadership is not appointed by the Governor.

The U.S. Forest Service says that climate change may make trees more susceptible to disease and death. And while TFS says it does not have a formal policy on how climate change impacts its mission the agency’s Forest Action Plan gives strong consideration to the impact of climate change on forests and ways to address the issue.

The commissioners of the Texas General Land Office, Texas Department of Agriculture and the Texas Railroad Commission are all elected positions and not appointed by the governor. None of these agencies have a policy on climate change, either.

The Politics of Climate Change in Texas

“The politics of this, if you're a Republican, are very tricky,” said Dr. Jim Henson, Director of the Texas Politics Project at the University of Texas at Austin.

“When everybody adopts a norm that says, ‘You know, we can't really talk about climate change directly or explicitly,’ that's going to affect the policy discussion,” he said. “Silence becomes the default option in a polarized environment like this.”

The politics of climate change also reached into government inquiries that followed the aftermath of the February winter storm.

During a hearing with experts to better understand why the state-run power grid failed in Texas, Senator John Whitmire, a Democrat from Houston, said, “I think we have to put it on the table, ‘global warming’ or whatever is happening to our weather patterns. Would it be your educated advice that we better get ready for more?”

With that, another senator who was chairing the hearing, Kelly Hancock, a Republican from Tarrant County interrupted.

“I really want to focus on last week. Was it predicted? Can you predict the extent? Should we have known it was going to last this long? How easy is that to predict? Those type of events,” Hancock said. “Rather than get into a climate change discussion at this point,” he added.

The science is clear: climate change is juicing up the destructiveness of hurricanes, drought, fire. Around the country and the world, governments are making plans to address those risks.

But, in Texas, the response is silence.

The Abbott Administration will not talk about climate change and will not use climate science to tackle the risks Texans face in the future and try to do something about them now.