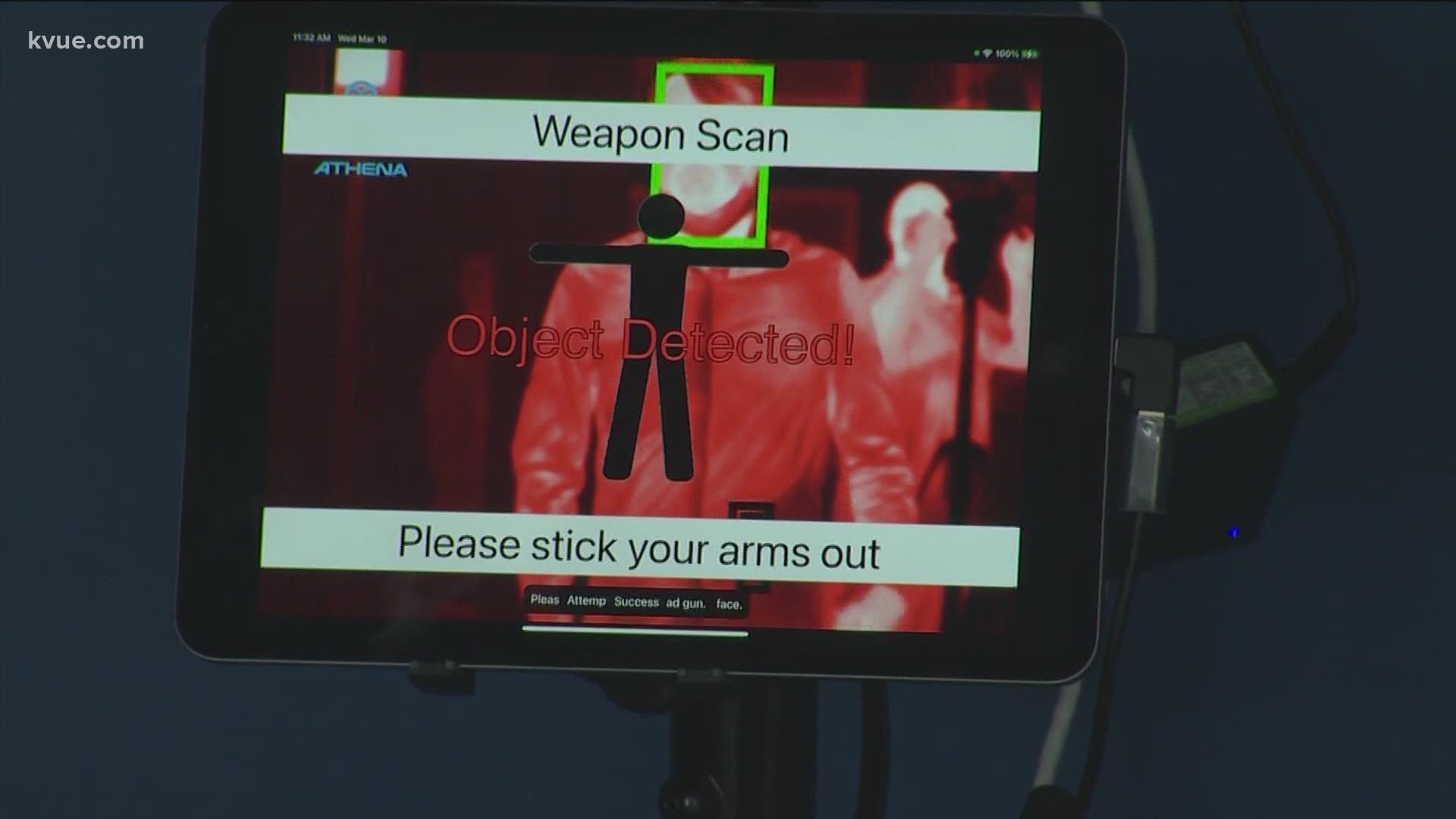 AUSTIN, Texas — A local company is working to make workplaces and schools safer as more people return to normal activities.

The technology was originally intended to prevent mass shootings in schools, but now it’s being used in hospitals and meat-packing facilities as well.

In a demo for KVUE, a concealed weapon showed up on an iPad screen when it was tucked underneath clothing in a waistband. The area where the weapon was located showed up darker in color and had a box around it, indicating it was a cooler spot on the person’s body as detected by the thermal camera. That signaled the possibility of a weapon.

"This camera is a thermal imaging camera. It actually can tell the temperature of down to a half a degree, which is very sensitive," said Chris Ciabarra, co-founder and chief technology officer for the company.

It’s a technology that some businesses may be looking closer at after Texas lawmakers passed a bill making it easier for people to carry weapons.

"We have so many technologies and innovations in our personal lives, in our entertainment world, but not a lot of those technologies have sort of seeped into the workplace," said Emily Whitcomb, director of the National Safety Council’s Work to Zero initiative, which aims to eliminate workplace deaths. "What we are really wanting employers to do is to innovate their safety practices, to adopt technologies such as this, to really help mitigate some of that, that risk."

Whitcomb said a lot of work has been done in workplaces to reduce injury rates, but the fatality rate has not seen that kind of improvement. According to the Bureau of Labor Statistics, 7.94% of the 4,572 workplace deaths in 2019 were due to gun violence.

The National Safety Council said some companies might be slower to adopt new technologies because of the upfront cost or because employees might not be on board.

An Austin employment attorney said there are not legal concerns when it comes to companies using the technology.

"Texas law, in general, affords employers broad latitude to monitor employees’ actions in the workplace. The key is that they just have to be on notice of those," said Karen Vladeck, a partner at Wittliff Cutter, PLLC.

Vladeck urges companies to alert workers if they are being monitored, similar to how companies may monitor email or internet use. She also suggested employers getting a waiver from employees.

In May, the Texas Legislature passed a bill that allows eligible Texans to carry guns without a permit and without training – one reason advocates like Whitcomb believe Athena Security’s technology could be more helpful now than ever.

Ciabarra hopes the system could make getting back to normal even safer.

Athena Security started in California but moved to Austin in 2017, Ciabarra said, because there are a lot of opportunities and a great pool of educated talent in Central Texas.

Match made in heaven: Schoenfeld, Dahlkemper reunited in Austin ahead of Wednesday's Olympic tune-up