Agility Robotics, in Albany, has sold its first two bi-pedal robots to Ford, as it tests an autonomous vehicle fleet. Other robots will be used in warehouses. 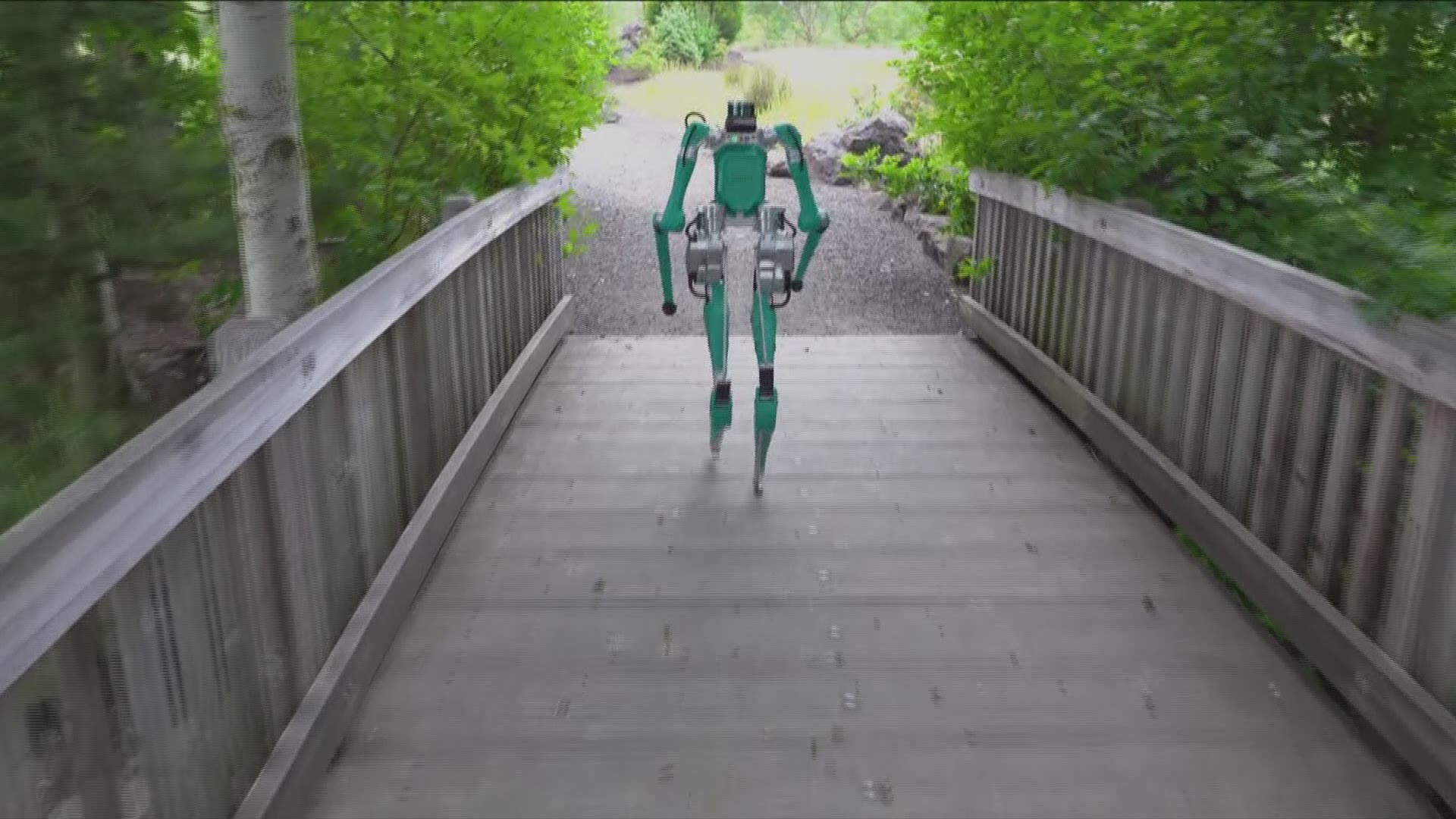 ALBANY, Oregon — Agility Robotics, a small company of 42 employees in Albany, makes bipedal robots, with arms and legs, and has sold the first two to Ford Motor Company. It's just the beginning for the implications of how robots like these will be used.

The first time you see it, it's legitimately hard to look away from. You focus on the movements — the bird-like legs, the humanness — but also the machinery of it. "Digit", as Agility's newest version is named, has become somewhat of a regular sight as engineers take them out on test walks around Albany to encounter real world obstacles. They take them in urban settings, down the city's sidewalks and past businesses, smiling pedestrians and crossing streets with cars, as well as natural settings in the woods or through grass and down trails.

"For these robots to be part of society and, be the sort of thing that you want to have around, you need to feel comfortable with it outside of your peripheral vision. It has to be completely safe and it has to feel completely safe."

Jonathan Hurst has a PhD in robotics from Carnegie Melon University. He teaches robotics at Oregon State University in nearby Corvallis and founded Agility Robotics years ago. Early versions of his machines were just two legs, getting them to move correctly and sense steps or a slope, took years to get right. Then arms were added.

"The robot can now lift a 40 pound package. It can catch itself when it falls and reorient to get back up," Hurst said.

Now, things are significantly ramping up at Agility. Our insatiable demand for online shopping is the fuel. Market pressure is huge to get that stuff to you fast and free. But the cost to pay and insure drivers is even bigger. There are at least 16 U.S. companies working on driverless fleets that would drop costs dramatically.

RELATED: Oregon futurist: More changes coming in next 10 years than the last 40

"So once you've got an autonomous vehicle that does a lot of it on the road, but now you're stuck at the curb, right? And in order to really provide that service that people want, you need to then get from the curb to the doorstep. And that's where we solve this problem."

On Agility's YouTube page they have a mock-up for an ad for a real fleet of autonomous vehicles from their partnership with Ford. It was the first company to buy two of Agility's robots last year. They're using one robot to test a package delivery service, and another to practice moving assembly parts in their warehouse.

In the ad you can watch below, it shows the van's back hatch opening up, Digit then folds out, gets the correct box, maneuvers around objects on a sidewalk and front porch steps, and even can remember where you want your packages to be left and then could send a delivery confirmation.

Digit costs $250,000. Agility will build 40 this year. As they scale up production and work out the technology, Hurst says eventually the price will drop to about $70,000. Several other unnamed Fortune 100 companies, that's the biggest of the big, have bought these, mostly for warehouse automation.

"So many jobs are basically robot jobs, they're the dull, dirty, dangerous kinds of things that are injury-prone and incredibly repetitive. That's how you can then really increase the value of the jobs that the people get to do."

RELATED: Portland experts share perspective on what the office will look like when you go back to work

Finally, I know what you're thinking because as I watched some of their clips testing the robots in real settings, I thought it too, imagining a hundred of these in lock-step together: With all the good things robots will do, there's certainly an equal amount of bad and deadly uses as well. Just like drones in war time, or any movie set in the future.

Hurst said this, "People don't worry so much about, you know, industrial robot arms. They worry about our robot, but that's because it's anthropomorphic, it looks like a person. From the very founding of the company, we've said there will be no weapons on our robot, offensive or defensive, in every way that we have control as a company, contractually, who we sell to, what kind of support we can provide for robots over time and things like that. We can control those sorts of things. And that's pretty important to us. We're building robots to improve quality of life and to make the world a better place."