Diagnosed with terminal cancer, Jason Halbert knew he would never walk his girls down the aisle. So, they shared the special moment early.

HOUSTON, Texas — The sun peeked out from behind rain clouds on the day the Halbert family gathered in an old oil pumping station-turned reception hall north of Houston.

The weather seemed to mirror the mood of the gathering-- melancholy, but peppered with flickers of joy.

Jason Halbert and his daughters Kaylee, 18, and Ashlee, 16, gathered in the event space for a very special photo shoot.

Clad in a suit and tie, the devoted father was staging a life event he'd never get to see for himself.

He was about to share a wedding first dance with his girls.

Jason's life changed suddenly in April 2019. He went to the doctor after experiencing strange symptoms like slurred speech and difficulty balancing. An MRI found something shocking: an inoperable tumor on his brain stem. He was diagnosed with grade IV Glioblastoma, an aggressive and difficult to treat brain cancer.

He pursued treatment for a few months, but tests later found more bad news. The cancer had moved into his spinal fluid, a condition called Leptomeningeal disease.

Jason's combination of conditions was very rare and doctors couldn't do anything to treat him. He quit chemotherapy in September, and was given about two months to live.

When Jason and his wife Nicole told their daughters about his prognosis, the girls were devastated. But, determined to make the best of the time Jason had left with them, they brainstormed ways they could "pre-create" memories as a family.

Kaylee was particularly upset by the idea of her father not walking her down the aisle when she got married. So the Halberts decided to stage a mock wedding to make it happen.

Friends sprung into action to coordinate the details. Volunteers offered hair and makeup services and Kaylee and Ashlee got their pick of wedding dresses.

On the big day, photographer Shalonda Chaddock of chubbycheekphotography took photos of each daughter dancing with Jason.

Jason gave them their "something blue," anklets with a blue infinity symbol and recorded private messages for both girls's wedding days.

Nicole said the photo shoot was filled with a "spectrum" of emotions.

"You have an emptiness in your stomach but at the same time you're overjoyed," she said.

She said the family has tried to view Jason's situation as a blessing because they are able to experience final moments together.

"We're trying to fit a lifetime into a few months and that's a gift," Nicole said.

She hopes the girls look back on the images and remember "how incredibly much their father loved them."

"I don't want them to think of it as his journey to death but his celebration of life," Nicole said.

Nicole wanted to share the photos to encourage others to "pre-create" similar memories with loved ones before time runs out.

You can follow along with the Halberts' journey here.

You can help with the family's medical bills by donating here: 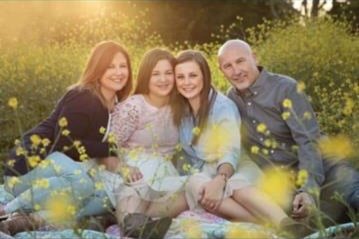 Click here to support #Pray For J organized by Tina Gilcrease
Tina Gilcrease #Pray For J This is for a good friend of ours. Jason Halbert and his beautiful family received the devastating news that he has a grade IV Gli