Gail is used to rude comments about the tumors on her body. She and her husband Tim, who has the same condition, are on a mission to fight hate with acceptance. 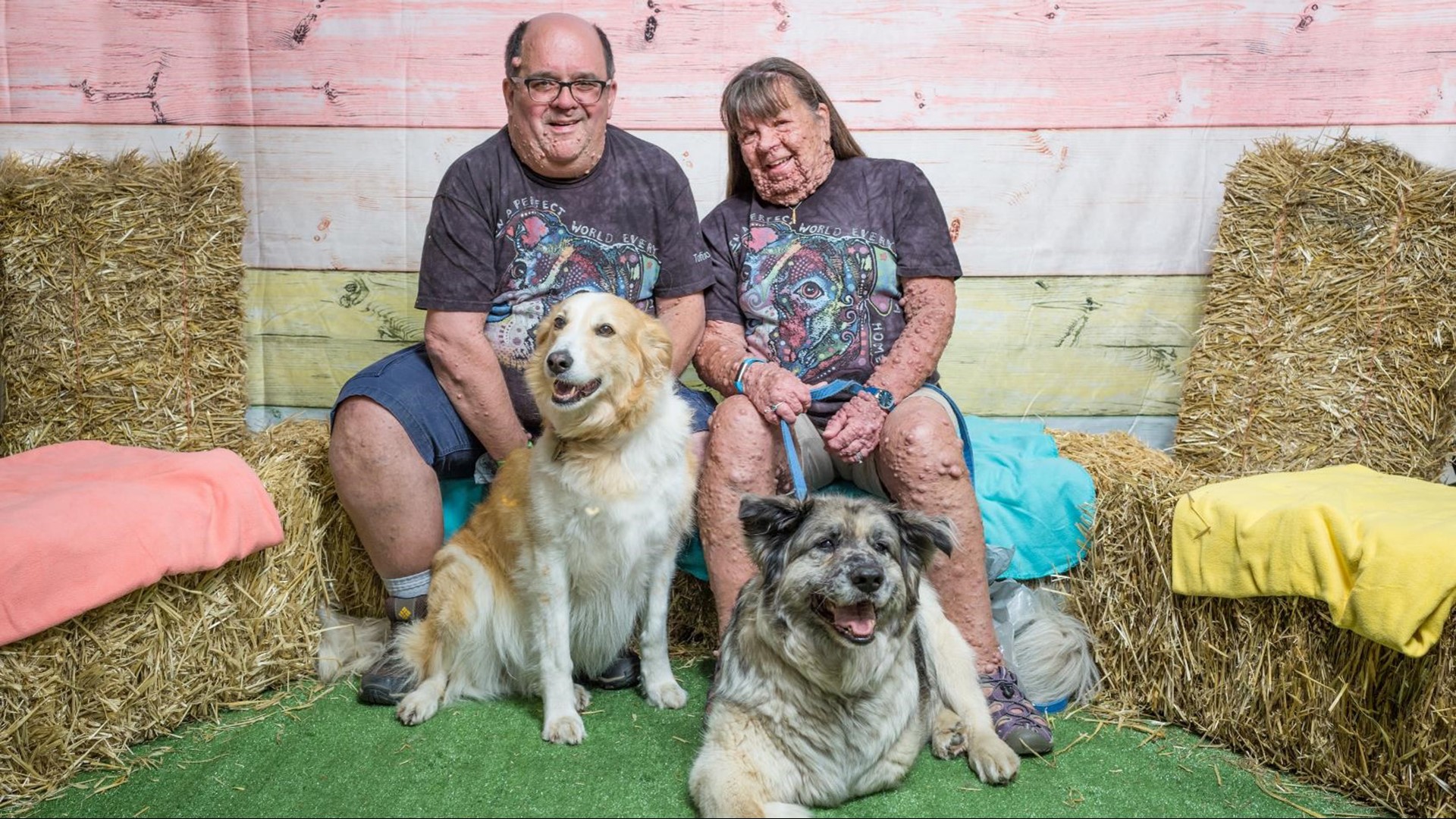 EDMONTON, AB — Gail Appelgren is used to strangers staring at her.

She's grown accustomed to people making cruel comments in front of her, asking if she can talk and assuming she has a contagious disease.

But she doesn't let the negativity get to her.

"I have pretty good self esteem," Gail said.

The Alberta, Canada resident has a condition called Neurofibromatosis, or NF, a disease which caused tumors to cover nearly her whole body. NF is a rare genetic disorder in which tumors form on nerve tissue. The disease can also cause other health complications like vision loss and severe pain.

During her lifetime, Gail has had more than 40 surgeries to manage the condition, but ultimately there's no way to stop the tumors from growing.

Gail genetically inherited the condition from her mother. She started showing signs of NF as a girl when she developed a chest tumor so large she could tuck it into her pants. Eventually, doctors diagnosed her with the disease, which has no cure.

As she got older, more and more tumors grew on her body. Kids at school would say mean comments about her appearance.

"Growing up it was a bit of a difficult time," she said.

But her positive attitude and buoyant self-confidence kept her positive. She played sports throughout school and surrounded herself with a large network of close friends.

Gail continued to find success as she got older, earning two university degrees, pursuing a career as a social worker and becoming a proud dog mom.

Gail was happy with her life, but she always hoped one day she might find someone to share it with.

Then when she was 50, fate came in the form of an unlikely workplace connection. One of Gail's coworkers was working on a case with another social worker named Tim Golumbia.

Tim mentioned to Gail's coworker a unique ice breaker he often uses with the children he works with: He shows them the bumps that speckle his arms and face.

"Are you single?" Gail's coworker blurted out.

Turns out, he was.

Tim's bumps, which are also caused by NF, are less numerous than Gail's, but he still experiences challenges as a result of his diagnosis. Growing up, he suffered from a learning disorder and poor balance.

As he got older, he tried dating but never had much luck.

"I know I wanted to find a date and go out with people, but no one wanted to go out with me and I never really realized it was probably because of my bumps," he said.

At the urging of Gail's coworker, the two started to talk on the phone and instantly connected.

"I got to feeling such a warmth because it was nice to talk to somebody who shared some of the same stuff as me medically, but also same interests, same music," Tim said.

In 2014, the two were married. They live together in Edmonton, Canada with their two dogs.

They're active in NF education, working on advocacy and outreach with the Alberta Tumour Foundation, an organization which aims to build a community among people living with tumors.

Unfortunately, Tim and Gail's story is not always the norm for people living with NF. Fifty-five percent of participants with NF in a 2015 survey reported symptoms indicative of a high likelihood of clinical depression.

"Some people don't leave their homes because of the physical appearance and the pain it causes. You just feel alone because no one looks like you," Gail said.

Tim and Gail hope they can inspire people with all types of differences to have confidence in themselves. Instead of staring at her, Gail encourages people to simply ask about her condition.

Tim and Gail over the years

HeartThreads are the best stories about the best of us. Want more? Follow us: