Gregg Popovich entered Wednesday night's opener against the Knicks tied with Jerry Sloan for the longest tenure with one team in NBA history. 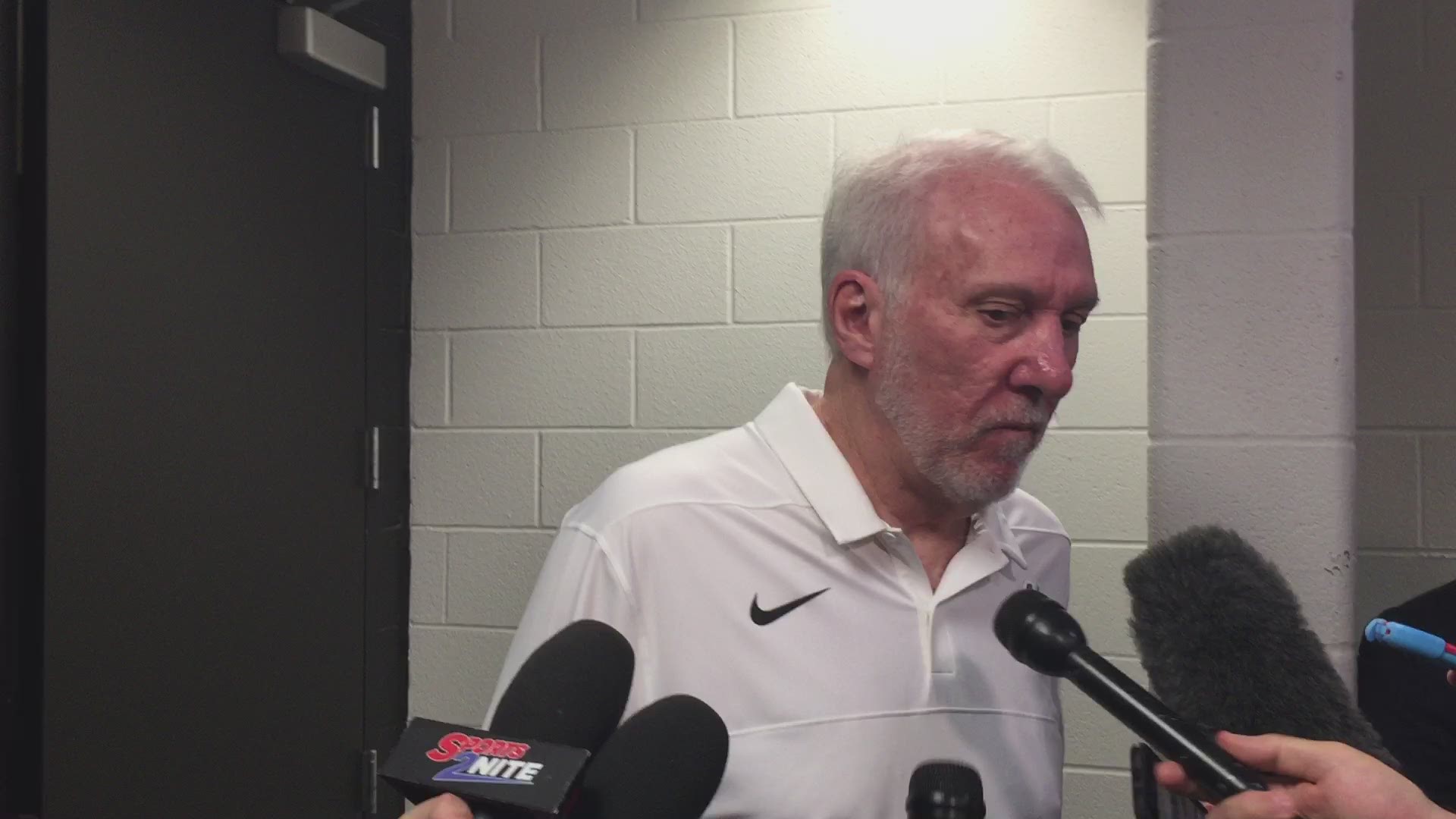 SAN ANTONIO — You've heard it plenty of times if you follow sports: Records are made to be broken.

But the one Gregg Popovich set Wednesday night, when he started his 24th season as the Spurs' coach, may stand for years to come.

Popovich, 70, entered the game against the New York Knicks tied with Jerry Sloan for the longest coaching tenure with one team in NBA history. Sloan coached the Utah Jazz for 23 seasons and Popovich tied his record last year.

LaMarcus Aldridge scored 22 points and Bryn Forbes added 20, leading the Spurs to a 120-111 victory over the Knicks at the AT&T Center.

Dejounte Murray also had a strong performance in his first regular-season game since missing the 2018-19 campaign with a knee injury, finishing with 18 points, eight rebounds, six assists and three steals.

Asked before the game what his secret is for his coaching longevity, Popovich smiled sheepishly and replied, "Wine . . . wine."

No one could have blamed Popovich if he had opted for something a little stronger after watching his team's uneven performance in the season opener.

"Any win in the NBA is sweet," Popovich said. "Some are prettier than others. This one wasn't pretty."

Credit: David Olmos / Special to KENS5.com
Guard Bryn Forbes scored 20 points in the Spurs' 120-111 victory over the New York Knicks in their season opener Oct. 23 at the AT&T Center.

The Spurs won despite coughing up 21 turnovers that the Knicks converted into 32 points. Trailing 84-83 after three quarters, the Silver and Black went the entire fourth period without a turnover and outscored New York 37-27 to pocket the victory.

"It's hard to win when you give up 32 points off turnovers," Popovich said. "The difference for us is, we did not turn it over in the fourth quarter. That was the ballgame. You take care of the ball, you've got a great chance to win."

The Spurs caught fire in the fourth quarter, hitting 12 of 22 field-goal attempts for 54.5 percent and nailed 3 of 6 three-pointers.

DeMar DeRozan, who had more turnovers (4) than points (3) after three quarters, scored 10 points in the final period and dished out three assists. Two of them went to Forbes and Murray, who hit back-to-back threes to give the Spurs a 105-97 lead with 5:02 left.

DeRozan and Rudy Gay rounded out San Antonio's double-figure scoring with 13 points each.

"As long as there's time on the clock, there's always an opportunity, no matter how bad some days (are)," DeRozan said. "You can't hold your head (down). I've been in the league for 11 years now, been through the ups and downs. Got to understand how to fight through when some aren't going your way."

Murray, who this week signed a four-year contract extension worth $64 million, hit 7 of 10 shots and knocked down his only three-point attempt.

Credit: David Olmos / Special to KENS5.com
Spurs forward Rudy Gay scored 13 points in a 120-111 victory against the New York Knicks in their season opener Oct. 23 at the AT&T Center.

Asked about his contract extension, Murray said: "I'm blessed. I'm going to give back as much as I can. Money doesn't define me. I'm just a motivated person, and I'm just going to continue to work hard. The rest will pan out."

Aldridge, who also finished with eight rebounds, hit 8 of 15 shots. Forbes was 7 of 12, including 3 of 6 from the three-point line, and added five rebounds. Trey Lyles led the Spurs on the boards with 11 rebounds.

The Silver and Black took the lead for good, 99-97, when Aldridge scored on a put-back dunk with 6:31 left. Forbes and Murray pushed the Spurs' lead to eight with their back-to-back threes.

"I think the lack of turnovers was the biggest thing," Forbes said. "We had 21 in the first three quarters, then in the fourth zero, which completely changed the game. We just played defense and didn't turn the  ball over."

The Knicks went cold while the Spurs got hot in the fourth quarter, hitting just 8 of 21 shots for 38.1 percent. But New York went 5 of 11 from beyond the arc to keep it relatively close.

In the first half, Forbes scored 15 points and Murray added 10, helping the Spurs take a 59-51 lead at the intermission. But the Knicks took the third quarter 33-24 to lead by one heading into the fourth period.

Forbes hit 5 of 8 shots and was 2 of 3 from three-point line in the first half, continuing the shooting touch he demonstrated in the preseason. Murray was 4 of 6 from the field and finished the half with five rebounds and four assists.

Morris and Randle led the Knicks' first-half scoring with 17 and 14 points, respectively.