Get the latest updates from the Austin FC vs. Houston Dynamo match here. 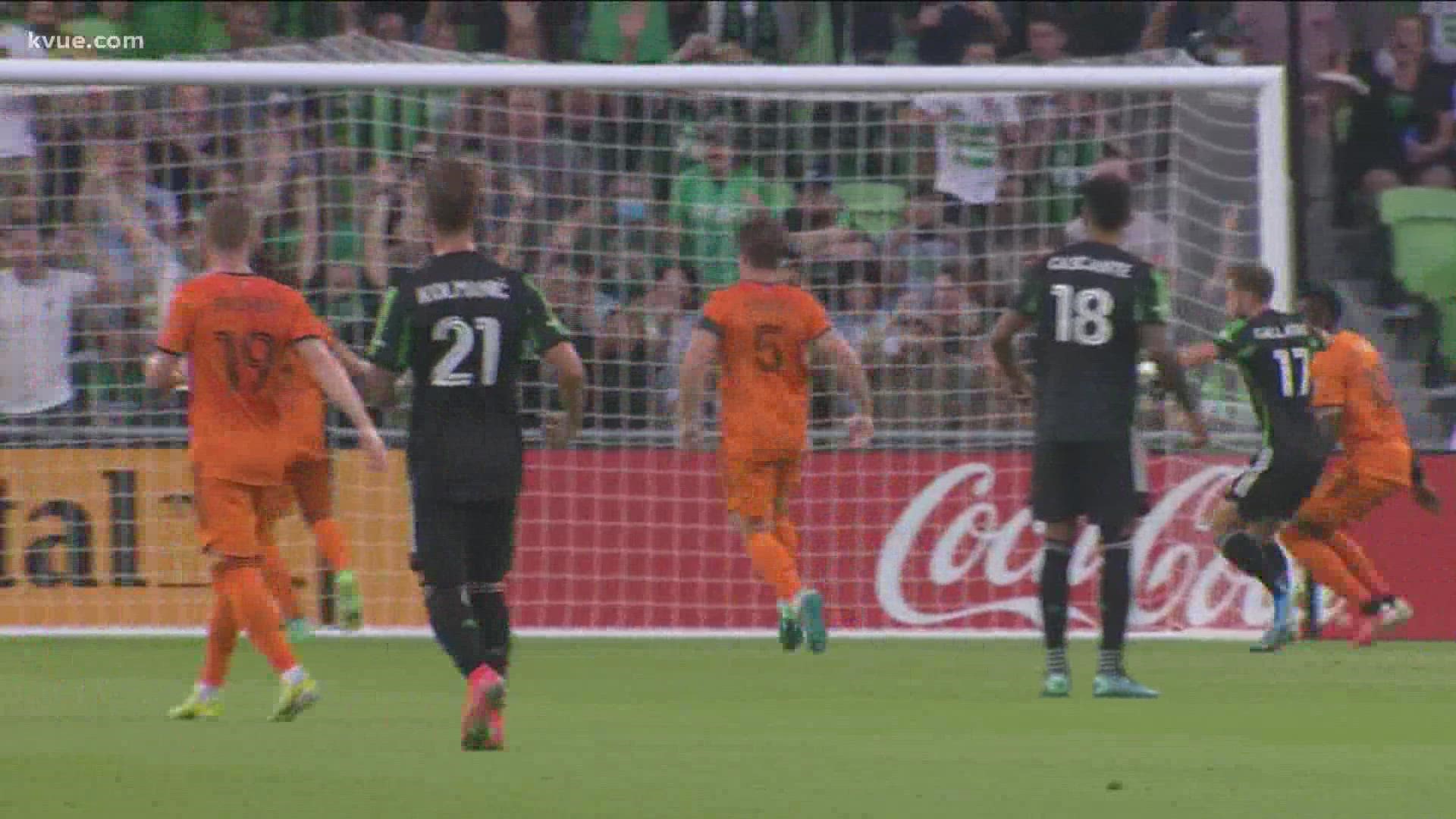 The verde and black have shown this season that they may not score often, but when they do, it happens in bunches.

Austin FC came into the match on a three-game scoreless streak. The club had only scored in one home game prior to Wednesday's match, which was another scoring clinic they put on against the Portland Timbers.

Tomas Pochettino was the man of the match, scoring his first two goals of the season. Cecilio Dominguez added another goal to his tally, cementing himself as the team's leader in goals scored (4). Houston Dynamo did not go away lightly, however. Down a man for nearly three-fourths of the match after a red card in the first half, Houston Dynamo FC scored to make it a one-goal deficit with only five minutes left in regular time. Austin FC's lead proved to be insurmountable and grabbed a much-needed three points.

Austin FC has 16 points on the season, slating them in the No. 12 spot in the Western Conference.

Next up, Austin FC will take on FC Dallas on the road. Wolff said the club's recently signed designated player, Sebastian Driussi, should be available for Saturday's match.

"It'll be a good chance to introduce him in this match on Saturday," Wolff said in the post-game press conference.

#AustinFC fans: Sebastian Driussi watch for Saturday's match against FC Dallas has been activated. Josh Wolff said he'll be implemented into team training tomorrow and alluded to an appearance from the Argentine a few times. #VERDE

Misplay in the back costs #AustinFC a goal. 3-2 now, #VERDE up pic.twitter.com/oC3G7URB5b

76' | Another #AustinFC substitution on the night.

#AustinFC leads 3-1 now after header from Cecilio Dominguez. Dominguez leads the #VERDE with 4 goals on the season. pic.twitter.com/2gCB4uQvVK

Tomas Pochettino scored his first two goals of the season for Austin FC in the first half.

After playing down a player due to a red card, Houston briefly tied the game in the 27th minute following a misplayed ball by Julio Cascante to the midfielders. Tyler Pasher finished a rebounded shot from just outside the six-yard box.

Pochettino's second goal came just before stoppage time and nearly got a third to go in off of a header in stoppage time.

45': Austin FC goal: Tomas Pochettino scores a right-footed goal the the rebound of a Houston FC save. This is Pochettino's second goal of the match.

#AustinFC take the lead again just before half. Tomas Pochettino scored his 2nd on the cleanup of a Diego Fagundez strike. 2-1, #VERDE pic.twitter.com/7da0af3qlX

20': Darwin Cerén (Houston Dynamo FC) has been ejected with a red card. Houston will be man down for the rest of the match.

20' | Red card issued to Houston.
Houston will play the remainder of the match with 10 men.#ATXvHOU 1-0

#AustinFC attack forces an own goal. #VERDE up 1-0. pic.twitter.com/oSiLp5x5sn

Stat correction: Goal is being credited to Tomas Pochettino.

This is being credited as Tomas Pochettino’s goal. Still looks like an own goal to me. Scoreboard don’t care though. Neither do #AustinFC fans, I’d imagine. Counts all the same. 1-0, #VERDE https://t.co/n9sAR5YZMK

Austin FC limp into their first MLS regular-season match against Houston Dynamo FC on a three-game losing streak. The club has also been held scoreless throughout the three-game skid.

The verde and black had an offensive explosion against Portland last month, but aside from that one match, have failed to score in Q2 Stadium. Scoring woes have been a point of emphasis, prompting the team to sign a slew of attacking players, including the team's third designated player Sebastian Driussi, Moussa Djitte and Austin native McKinze Gaines.

Austin FC head coach Josh Wolff said Driussi and Djitte were not available to play yet, pending visas, green cards and other paperwork.

Midfielder Daniel Pereira has also been sorely missed as a calming presence on the ball in the middle of the pitch, but will be available against Houston, according to Wolff.

"[Pereira] has been involved for the last week or so now in full training," Wolff said. "He should be available for the game. We have to be responsible with his minutes. We are optimistic he can find some minutes [against Houston] and certainly against Dallas."

For Houston, the Dynamo come to Austin having drawn their last three matches. In Houston's last nine matches, the club has drawn seven times and lost twice. Houston's last win came on May 22 against the Vancouver Whitecaps.

Houston sits ninth in the Western Conference standings with 18 points. Austin is in last place in the West with 13 points.