The Houston Texans are hosting the Buffalo Bills for their Wild Card Weekend match-up Saturday at NRG Stadium. 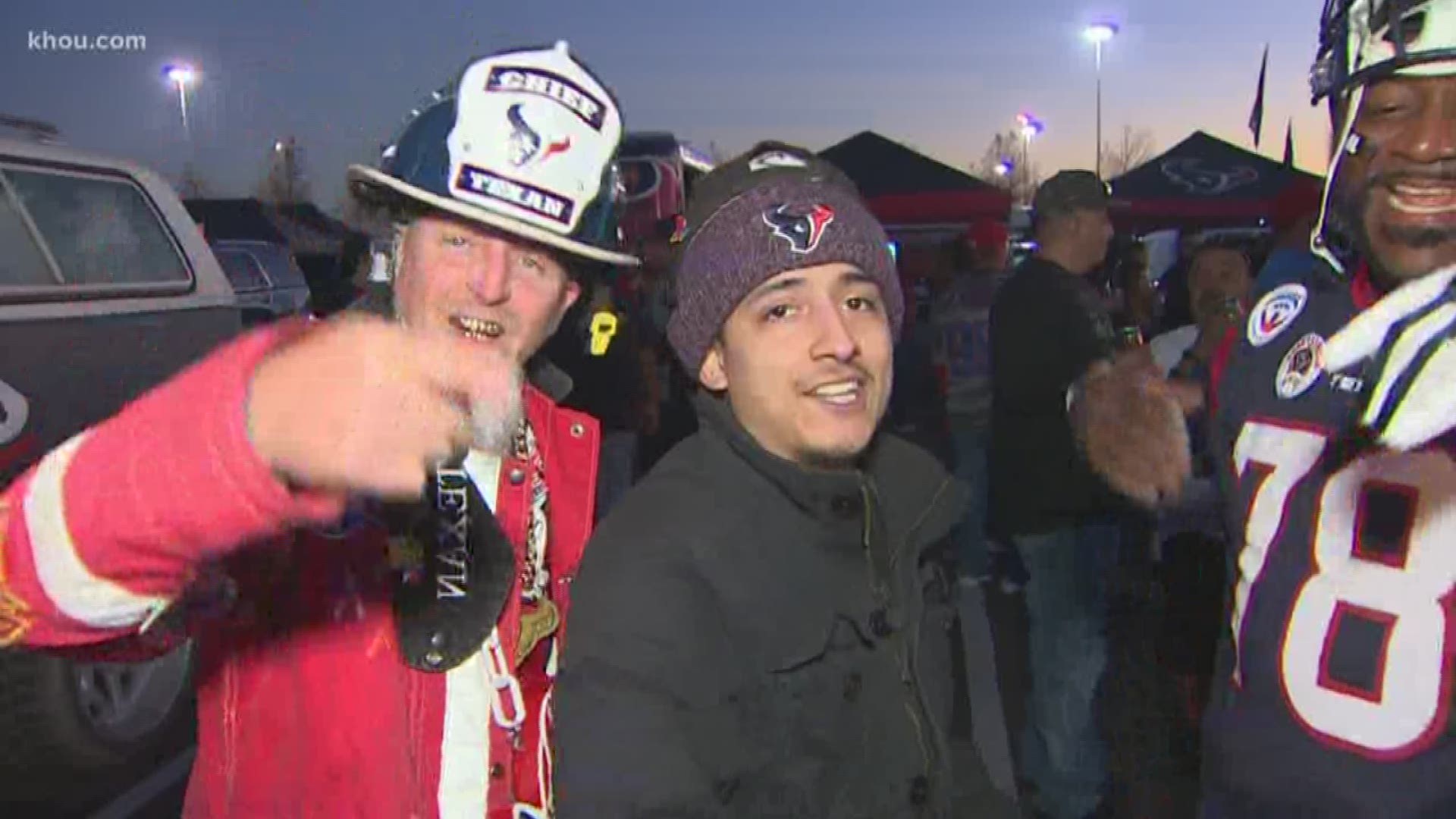 HOUSTON — Deshaun Watson threw a touchdown pass and ran for a score in regulation and then led the winning drive in overtime as the Texans added another comeback to Houston playoff history by rallying from a double-digit second-half deficit for a 22-19 victory over the Buffalo Bills in the first round of the playoffs.

Both teams had to punt on their first possessions of overtime. On Houston’s next drive, Watson evaded a sack by wriggling away from one defender and bouncing off another before rolling out to find Taiwan Jones for a 34-yard reception to set up first-and-goal. Ka'imi Fairbairn then kicked a 28-yard field goal to lift Houston to the victory.

The Texans are set to play the Kansas City Chiefs at 2:05 p.m. next Sunday in the divisional round after the Tennessee Titans defeated the New England Patriots 20-13 Saturday night.

(4:16): Deshaun Watson escapes pass rushers and hits Antwan Jones for a huge gain and a first down!

(9:44): A couple of Josh Allen incomplete passes forces Buffalo to punt. Texans get the ball back.

(0:34): Buffalo picks up a 1st down with Josh Allen's pass to Isaiah McKenzie. The play was reviewed, as it appears he was short and his knee was down. The ruling on the field stands.

(1:03): Josh Allen's pass is incomplete to John Brown. He throws another incomplete pass on the next play to bring up 3rd and 10.

(1:16): Deshaun Watson runs up the middle for no gain on 4th down. Buffalo gets the ball back.

(2:00): Josh Allen's pass is incomplete. Intentional grounding is called on Buffalo to ut them at 4th and 27.

(3:45): Benardrick McKinney stops Devin Singletary to bring up 3rd and 1.

(4:37): TOUCHDOWN TEXANS! Carlos Hyde runs it in for 5 yards. The 2-point conversion attempt is good with a DeAndre Hopkins completion. The Texans take the lead 19-16.

(5:08): Carlos Hyde drops the pitch but recovers and brings up 2nd and goal.

(5:57): The Texans convert on third down with Deshaun Watson's 14-yard pass to Darren Fells. 1st and goal at the Buffalo 1.

(1:33): TOUCHDOWN TEXANS! Deshaun Watson runs it in for 20 yards and the Texans' first TD. His 2-point conversion attempt is GOOD.

(2:50): Deshaun Watson scrambles and runs out of bounds on 2nd down.

(10:06): Deshaun Watson's pass is complete to DeAndre Hopkins, but he fumbles the ball. Bills recover inside the Texans' 40-yard line.

(14:23): The Texans are driving, but Deshaun Watson is sacked at 3rd and 9. That's five sacks on Watson in this game.

(0:38): The Bills convert on another third down with a 3-yard reception for Devin Singletary.

(1:30): Another first down for Buffalo with Devin Singletary's 12-yard reception.

(3:15): Zach Cunningham brings down Frank Gore to bring up third down.

(6:59): Deshaun Watson's pass is complete to Duke Johnson on fourth down, but he comes up short. Texans punt again.

(9:25): Deshaun Watson's pass is complete Darren Fells for 10 yards and a first down.

(10:09): Deshaun Watson is sacked on second down. He's been sacked three times in this game.

(11:38): Benardrick McKinney stops Josh Allen up the middle to bring up 3rd and long for Buffalo.

(12:06): Texans force a fumble, and Whitney Mercilus returns it to the 46-yard line. The replay, however, shows Josh Allen's knee is down.

(12:49): John Brown picks up another first down for Buffalo with a 28-yard reception.

(13:35): Buffalo converts on third down with a 10-yard Isaiah McKenzie reception.

(0:39): The Texans force a Bills punt on the second possession.

(2:48): The Texans convert on third down with Deshaun Watson's 11-yard pass to Darren Fells, but a sack on third down brings up fourth and long.

(7:15): DeAndre Hopkins is called for pass interference on third down. Bill O'Brien challenges, but the call stands, and Houston loses a timeout.

The Texans won their fourth AFC South title in the last four years. The Texans are a 2.5-point favorite to advance in the playoffs.

The team rested most of their starters in a 35-14 loss to the Tennessee Titans last week, while the Bills were thumped by the Jets, 13-6.

The Texans defense will get a boost from the return of J.J. Watt, coming back from what was considered a season-ending pectoral muscle injury. Quarterback Deshaun Watson, who sat out the Tennessee game, should be ready to go Saturday. DeAndre Hopkins should also be a go after suffering an illness.

Buffalo also rested key players in their loss to the Jets last weekend. QB Josh Allen started, but was pulled early. Cornerback Tre'Davious White and running back Devin Singletary both didn't suit up for the Bills.

Justin Reid with the hook-up for some lucky fan.

Kam Franklin is ready for her pre-game performance.

Texans speedy wideout Will Fuller is among the inactives for today's playoff matchup.

Could not have asked for a better day for tailgating outside NRG Stadium.

Texans superfans are ready for playoff football and the return of J.J. Watt at NRG Stadium.

J.J. Watt is set to return to the field in today's playoff match-up.

Toro the Texans is taking "no Bills" today literally.