It was also Cleveland's first victory at Heinz Field since 2003. 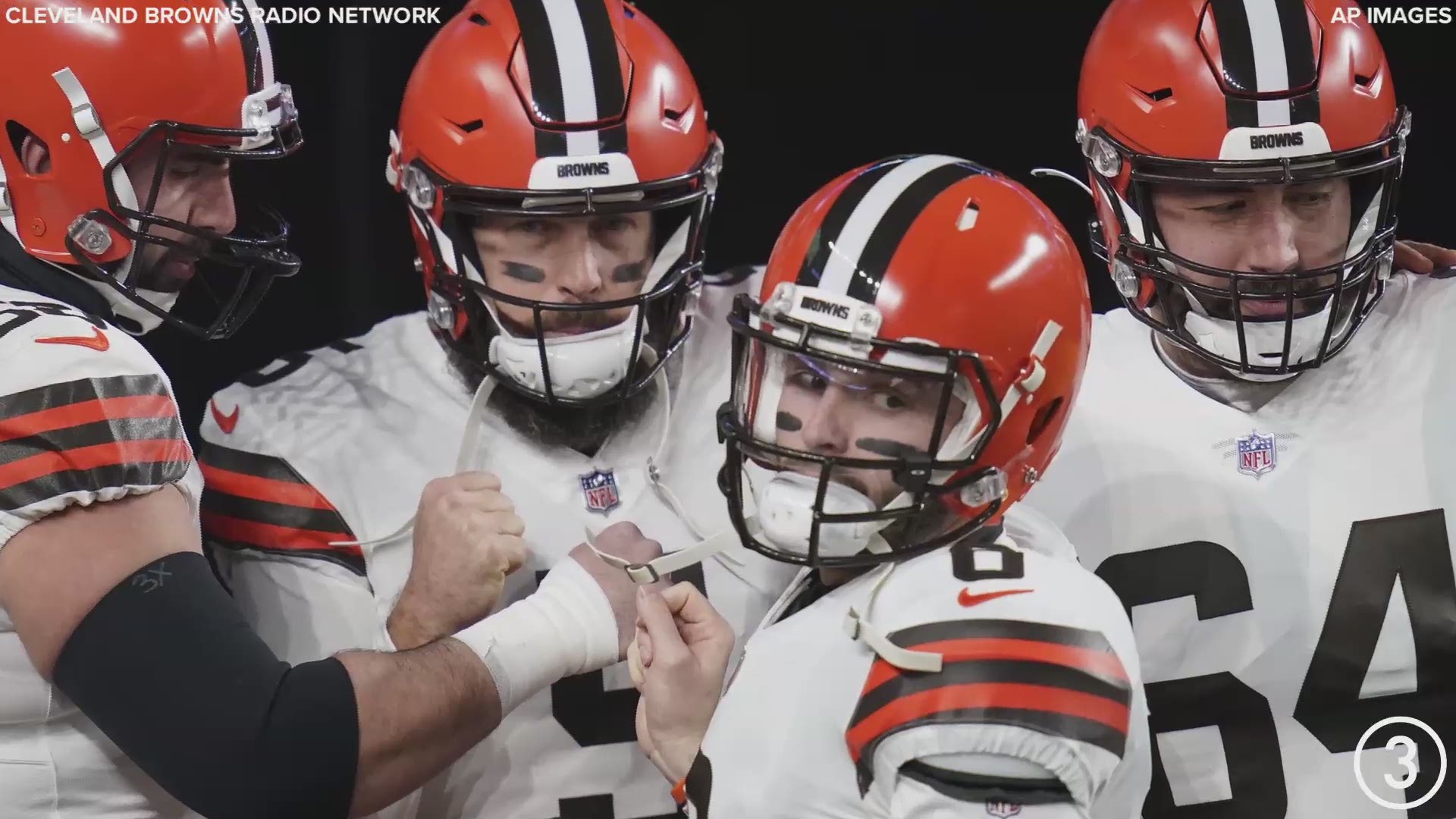 PITTSBURGH — What. A. Night.

In a game that saw most people’s jaws hit the floor from the first snap, the Browns ran past the hated Pittsburgh Steelers 48-37 in the AFC Wild Card playoff round. Cleveland earned its first postseason win since 1994, and its first victory at Heinz Field since 2003.

Baker Mayfield threw for 263 yards and three touchdowns in his playoff debut, while Nick Chubb had 145 yards and a score. The Steelers offense was sloppy all night with five turnovers, including four Ben Roethlisberger interceptions.

Despite the COVID-19 pandemic, dozens of fans were at Cleveland Hopkins International Airport to greet the Browns when the landed back home around 3 a.m. It was an emotional night for all, and the players showed their appreciation for the die-hards who came out to say "Thank you."

The Browns will head to Kansas City next Sunday to face the No. 1 seed and defending Super Bowl champion Chiefs in the AFC Divisional round. Cleveland will be seeking its first trip to the AFC Championship Game since 1989.

What follows is a drive-by-drive recap of tonight's game, with the most recent plays and updates closest to the top. We'll have plenty of more analysis tonight on "What's Next" following NBC's postgame coverage.

1:09: Ben Roethlisberger throws a 7-yard touchdown pass to Chase Claypool and the two-point conversion is good, but the onside kick is recovered by Cleveland. The Browns take over, and will simply kneel on the ball to run out the clock.

3:16: Sione Takitaki comes up with the play of the game, snagging Ben Roethlisberger's fourth interception of the night. The Browns get the ball on the Pittsburgh 25, hoping to run out the clock.

Takitaki with the PICK!

4:28: The Browns march down the field and burn more than six minutes off the clock, and it culminates in a 24-yard field goal by Cody Parkey. The Browns now lead 45-29.

11:08: The Steelers answer right back, with Ben Roethlisberger finding Chase Claypool for a 29-yard touchdown. The Steelers get back in it, and now trail 42-29 with a lot of time left.

12:32: Just like he's done all year, Nick Chubb comes up BIG: The Pro Bowl running back takes Baker Mayfield's pass and dashes 40 yards for the score, and the Browns extend their lead to 42-23.

14:52: The Browns finally get a stop, and Jordan Berry punts after the Steelers attempt to draw Cleveland offsides. The kick goes into the end zone, putting the ball at the 20.

1:40: The Browns offense has gone completely cold... Another three-and-out forces another Jamie Gillan punt, and the Steelers get the ball back at their own 37-yard line.

6:22: The Browns go three-and-out, burning just a minute off the clock and gaining just two yards in the process. Jamie Gillan punts again, and Ray-Ray McCloud takes it to the Steelers 32.

7:22: Ben Roethlisberger leads the Steelers down the field and caps the drive with a 17-yard touchdown pass to Eric Ebron. The ensuing two-point conversion attempt is no good, and the Browns' lead stays at 35-16.

11:07: The Browns get the ball to start the second half, but stall at the Steelers 49-yard line. Ray-Ray McCloud returns it to the Pittsburgh 16.

Meanwhile, Kareem Hunt's family is in the stands, and is loving the game the Willoughby native is having.

.@Kareemhunt7’s mom, Stephanie, and stepfather, Deltrin, are PUMPED about that first half. #Browns #3Browns @wkyc pic.twitter.com/qTc5I81Ncw

1:44: The Pittsburgh offense finally gets clicking, with Ben Roethlisberger completing multiple sharp passes on the drive. James Conner later picks up a 4th-and-short before punching it in for the touchdown, and the Steelers cut the deficit to 28-7.

.@JamesConner_ scores from a yard out

Some bad news for the Browns: All-Pro right tackle Jack Conklin is questionable to return after suffering a hamstring injury.

7:20: A wide-open Austin Hooper drops a perfect Baker Mayfield pass, and the Browns are forced to punt again. Jamie Gillan kicks it to the Steelers 11.

10:10: Ben Roethlisberger can't believe it either... His pass is deflected at the line by Porter Gustin, who promptly intercepts it at the Steeler 47-yard line. The Browns get their fourth takeaway, and the ball.

Porter Gustin DIVES for the INT!

11:20: For the first time tonight, the Browns are forced to punt. Jamie Gillan boots it to the Pittsburgh 46, where the Steelers will start.

12:19: The Steelers drive into Browns territory, but stall at the 38-yard line. Rather than go for it on 4th-and-long, Jordan Berry comes out for the punt, and pins Cleveland at its own 10.

1:56: Kareem Hunt continues to dominate, taking it in for an 8-yard touchdown. The Browns lead 28-0, setting the most points in a first quarter in NFL postseason history.

3:18: Everything is coming up Cleveland... Ben Roethlisberger throws his second interceptions of the night, and Sheldrick Redwine returns it all the way to the Steelers 15. The Browns have a chance to add to an already massive lead.

4:40: The Cleveland offense is moving with ease, and eventually Kareem Hunt barrels 11 yards through the Steel Curtain for a touchdown. 21-0 Browns, and no, you are not dreaming.

.@Kareemhunt7 WILL NOT BE DENIED.

7:40: The Browns are winning the physical battle right now, forcing a Steelers three-and-out on Pittsburgh's third drive. Jordan Berry punts, and Donovan Peoples-Jones returns it to the Cleveland 35.

9:46: Lightening has struck again... Baker Mayfield hits Jarvis Landry over the middle, and the receiver dashes 40 yards for the touchdown. The Browns are out to a quick 14-0 lead.

Odell Beckham Jr., out since Week 7 with a knee injury, is hyping his best friend on Twitter.

10:44: This is astonishing... The Steelers turn it over again as Ben Roethlisberger is picked off by M.J. Stewart Jr. The Browns take over on the Steelers 36.

14:46: Well...that was fast....The Steelers start with the ball on their own 22-yard line, but Maurkice Pouncey's snap sails over Ben Roethlisberger's head. Karl Joseph falls on the ball in the end zone for a Browns touchdown, and Cleveland shockingly takes an early 7-0 lead.

"Voice of the Browns" and 3News sports anchor Jim Donovan caught up with Kevin Stefanski before tonight's game. The coach is in good spirits despite being stuck back in Northeast Ohio.

Our own Pat Chiesa is at Heinz Field. Although it is sure to be a classic meeting of one of football's greatest rivalries, there will unfortunately be no fans allowed inside the stadium due to the COVID-19 pandemic.

A view of Heinz Field from an empty Gold Lot as the sun begins to set here in Pittsburgh. Only friends and family of players and coaches are allowed to attend tonight's Browns-Steelers playoff game. Definitely a weirdly empty feeling around here. @wkyc #3browns pic.twitter.com/6nQ32GQARh