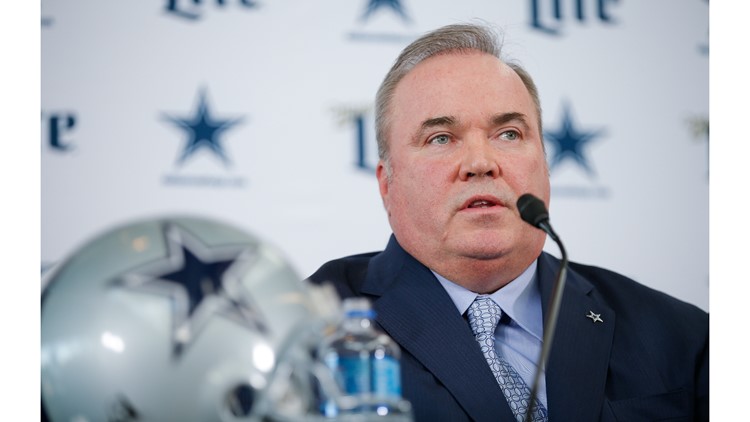 FRISCO, Texas — From the moment he sat down and let out an audible "Wow," new Dallas Cowboys head coach Mike McCarthy gave a glimpse of what you can expect moving forward.

After choking up a little when just after he started talking he said, "my wife said I wouldn't make it through 10 words, I think I got to about six."

He was human and genuine, with just about the right amount of funny, even admitting to telling Cowboys owner Jerry Jones a small fib about how much film study he did of last season.

"I need to confess. I told Jerry I watched every play of the 2019 season, but I wanted the job," he said as the crowd laughed. "I mean, you do what you got to do, right?"

This new Cowboys coach can put his opening press conference in the win column. Now he can get to work on piling up Ws that count. The championship pedigree is there.

And in his year off after getting fired by the Green Bay Packers, the work McCarthy put in impressed the owner and may have sealed the deal.

"It's lightning in a bottle. I think we were fortunate," Jones said. "Lombardi [trophies] are hard to get a hold of and we know that. And he's had one of his own. To catch that right now and get our time to do it, that's just an opportunity."

When McCarthy led the Packers to the 2011 Super Bowl title, he was the singular face and voice of the organization. It's a different world now, though. There will be more scrutiny and questions from inside and out of the Cowboys organization.

"I think the best statement that was said over and over in the interview - we're going to make 'we' decisions."

And then there's the question everyone wanted to ask. You'll recall McCarthy was the opposing coach during the 2014 divisional playoff game when Dez Bryant had the controversial reversal of a catch near the goal line. So, it had to be asked.

"Hey, I'll say this," he began with a chuckle as the room burst into laughter. "It was a great catch, I can say now. But it wasn't then, technically." More laughter filled the room.