President Joe Biden honored the team Tuesday during a ceremony full of jokes, memories and calls to action. 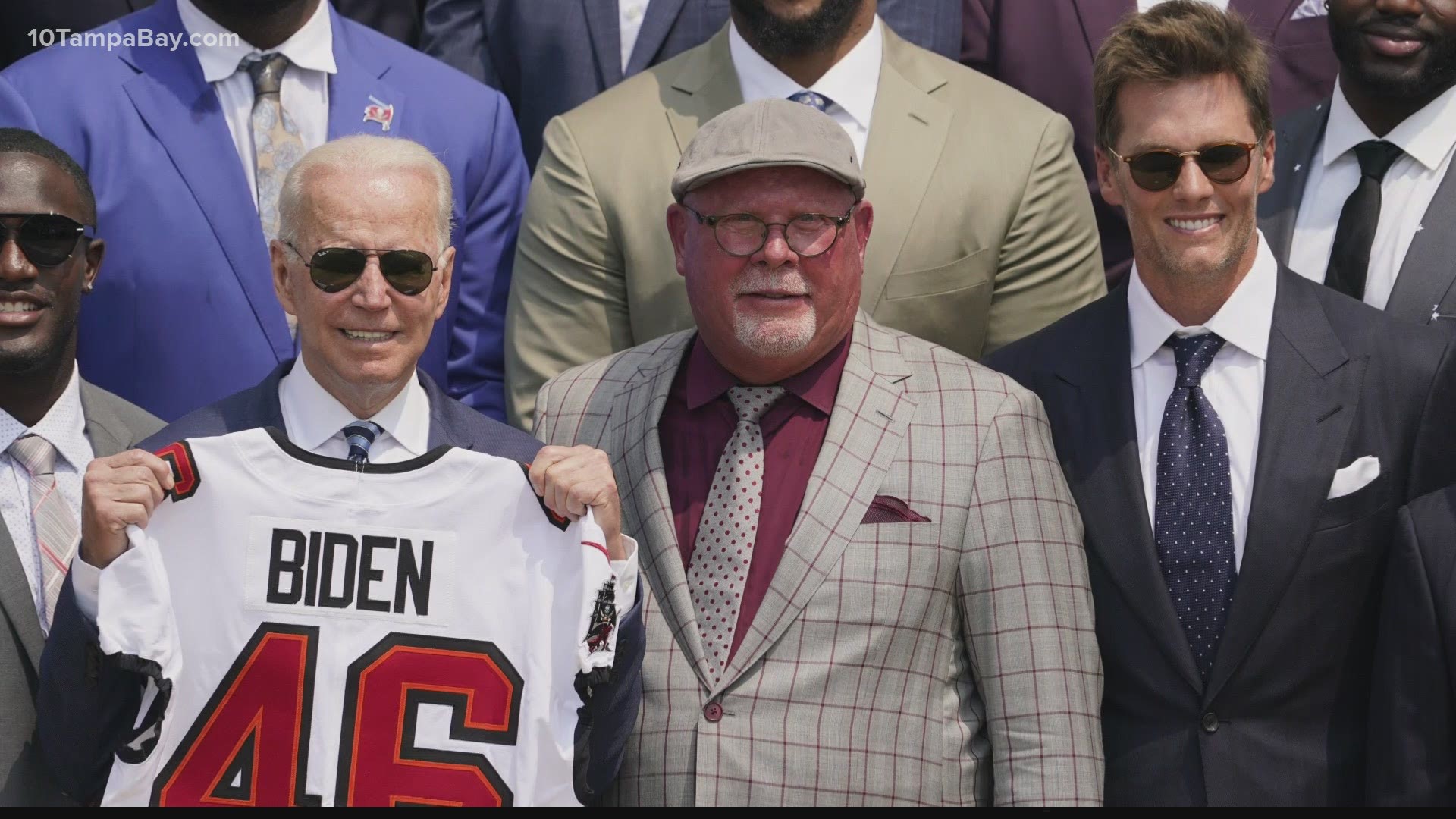 WASHINGTON, D.C., USA — This week will be a whirlwind for the Bucs, who receive their Super Bowl rings on Thursday, report to fall training camp on Saturday and begin workouts on Sunday.

But first, the team made its way to the White House after receiving an invitation from President Joe Biden to honor their Super Bowl LV victory.

The Buccaneers are the first Tampa Bay team to meet the president at 1600 Pennsylvania Avenue after the Iraq War prohibited the team's 2003 Super Bowl victory visit, according to several reports.

During the ceremony, Biden welcomed the Bucs and showed some love to Chris Godwin and the GOAT himself. He also commended Tampa for being a "City of Champions."

The president also thanked the team for "stepping up" off the field by helping people to register to vote and get vaccinated at Raymond James Stadium.

Head coach Bruce Arians and quarterback Tom Brady, who accompanied Biden to the ceremony, also had a chance to speak.

Arians got emotional at the mic while discussing the sacrifices everyone made during the pandemic to make sure the team stayed healthy. The head coach also shared about the Bucs "one team, one cause" message.

Brady, on the other hand, managed to add comedian to his resume after firing off several jokes during his speech. The most notable was Brady joking with Biden about people not thinking they won.

“Not a lot of people think that we could have won. In fact, I think about 40% of people still don't think we won," the quarterback said.

“I understand that," Biden replied.

10 Tampa Bay's Evan Closky is in Washington, D.C., to bring you coverage as it unfolds.

The ceremony was jam-packed with jokes, memories and calls to action.

WHAT A DAY! Here's a glimpse into the @Buccaneers #SuperBowl victory ceremony with @POTUS at the White House https://t.co/4bkDAhSXtI

Devin White hands down gave the best White House tour of the day.

Ndamukong Suh shares what it feels like to be at the White House as he heads into his 12th season in the NFL.

A LONG TIME COMING: @NdamukongSuh shares what it feels like to be at the White House celebrating being #SuperBowl champs as he heads into his 12th season in the NFL. pic.twitter.com/Su2tOdEbuj

Head coach Bruce Arians discusses the "One team. One cause." mentality and how it could apply to the U.S. House and Senate.

Bruce Arians: "One team. One cause. They got together and made something very, very special happen. And, jokingly, if our house and our senate would quit fighting and try and do something for the country. It would be really nice." https://t.co/Fege5WruW1 pic.twitter.com/nu7MFCLrhy

Does anyone else think Arians is ready for training camp?

This is a busy week for the Bucs. White House visit today, get the rings on Thursday and camp starts on the weekend.

I asked Arians about the schedule and he said 'I can't wait for Thursday to be over.'

He has been focused on the new season 'for a long time.'@10TampaBay pic.twitter.com/e1dha9bAnA

Here is what Marpet had to say about that experience and the importance of utilizing his platform:@10TampaBay pic.twitter.com/eMrt4t5cP1

Chris Godwin shares about his and Biden's special Delaware connection.

I asked @CGtwelve_ about that special Delaware connection with @POTUS.

He also added, "I always watched things like this when I was a kid."@10TampaBay pic.twitter.com/CzqIbdIAWV

Bruce Arians says he appreciates President Biden for taking the time to honor the team's championship. "We know what's going on in the country, he's got a lot of s**t to do," he said.

That's one way to put it 🤷🤷‍♂️. Bruce Arians says he appreciates @POTUS taking the time to honor the @Buccaneers accomplishment https://t.co/5OmfYdhoyT

A little behind the scenes look from 10 Tampa Bay Sports Director @ECloskyWTSP during the @Buccaneers #SuperBowl victory ceremony. https://t.co/dDXZXUaOC2 pic.twitter.com/M9MrqvGJol

Tom Brady joked with President Joe Biden about people not thinking either of them won during the team's Super Bowl victory ceremony at the White House. The GOAT also joked about people calling him "Sleepy Tom."

"You understand that, Mr. President?": @TomBrady and @POTUS joked about people not thinking they won during Buccaneers' #SuperBowl victory ceremony at the White House https://t.co/4bkDAhSXtI pic.twitter.com/xXs9Z7YQQd

The 🐐crushed it. @10TampaBay pic.twitter.com/mU1yV7kAUe

Tom Brady has got jokes. He told the crowd at the team's Super Bowl victory ceremony that people have been calling him "Sleepy Tom."

“We had a game in Chicago where I lost track of what down it was… they started calling me Sleepy Tom.”

Yeah, we think so too. President Biden jokes Tom Brady has another 20 years left on the field.

President Biden shouted out Tampa as a "City of Champions" and also gave kudos to Tom Brady and Chris Godwin.

President Biden says Tampa has a pretty good case for the ‘City of Champions.’

Singles out Chris Godwin for the Delaware love.

Praises Tom Brady and says he’s got another 20 years to go. @10TampaBay pic.twitter.com/aWmfAHxuUr

Brady and Arians accompany the President out to the South Lawn. pic.twitter.com/A7m4yGLhDx

GOAT sighting has been confirmed through Donovan Smith's Instagram story.

Donovan Smith to Tom Brady: “You got residency here?”

Just a little photobomb from a bust of President Abraham Lincoln.

Per Scotty Miller’s IG, Lincoln seems to be photobombing pics.

They're here! The Buccaneers visiting the White House take a group photo on the South Lawn.

The first checkpoint has been cleared to make it to the champion's ceremony.

Here we go! Sports Director @ECloskyWTSP has made his way through the first checkpoint as he makes his way to the @WhiteHouse where the @Buccaneers will meet @POTUS. #GoBucs pic.twitter.com/7uUIdVB3vD

Wheels down in D.C.! Sports Director Evan Closky is on his way to get COVID-19 tested to be cleared to enter the White House.

Getting closer to the first-ever championship-winning team from the Tampa Bay area getting to meet the president at the White House.

Sports Director @ECloskyWTSP is flying through Charlotte on his way to DC as the @Buccaneers head to the @WhiteHouse to meet @POTUS. We’ll have live updates on air and online. #GoBucs pic.twitter.com/n4pucVlQuF

Just a little bit of trivia on the way to the White House. The first NFL team to a trip to D.C. was the Steelers in 1980.

Just a man, with his @BurgerKing coffee, heading to the White House.

Did you know the first NFL team to earn a trip to D.C. were the Steelers in 1980?(joined the Pirates)

This happened throughout history, but President Reagan is the one who made it a common occurrence. pic.twitter.com/cvsmSvKWpk

He's off! Sports Director Evan Closky is on his way to the White House for the Buccaneers' Super Bowl LV celebration.