The teams combined for more than 1,000 total yards and eight lead changes in a pivotal AFC showdown. 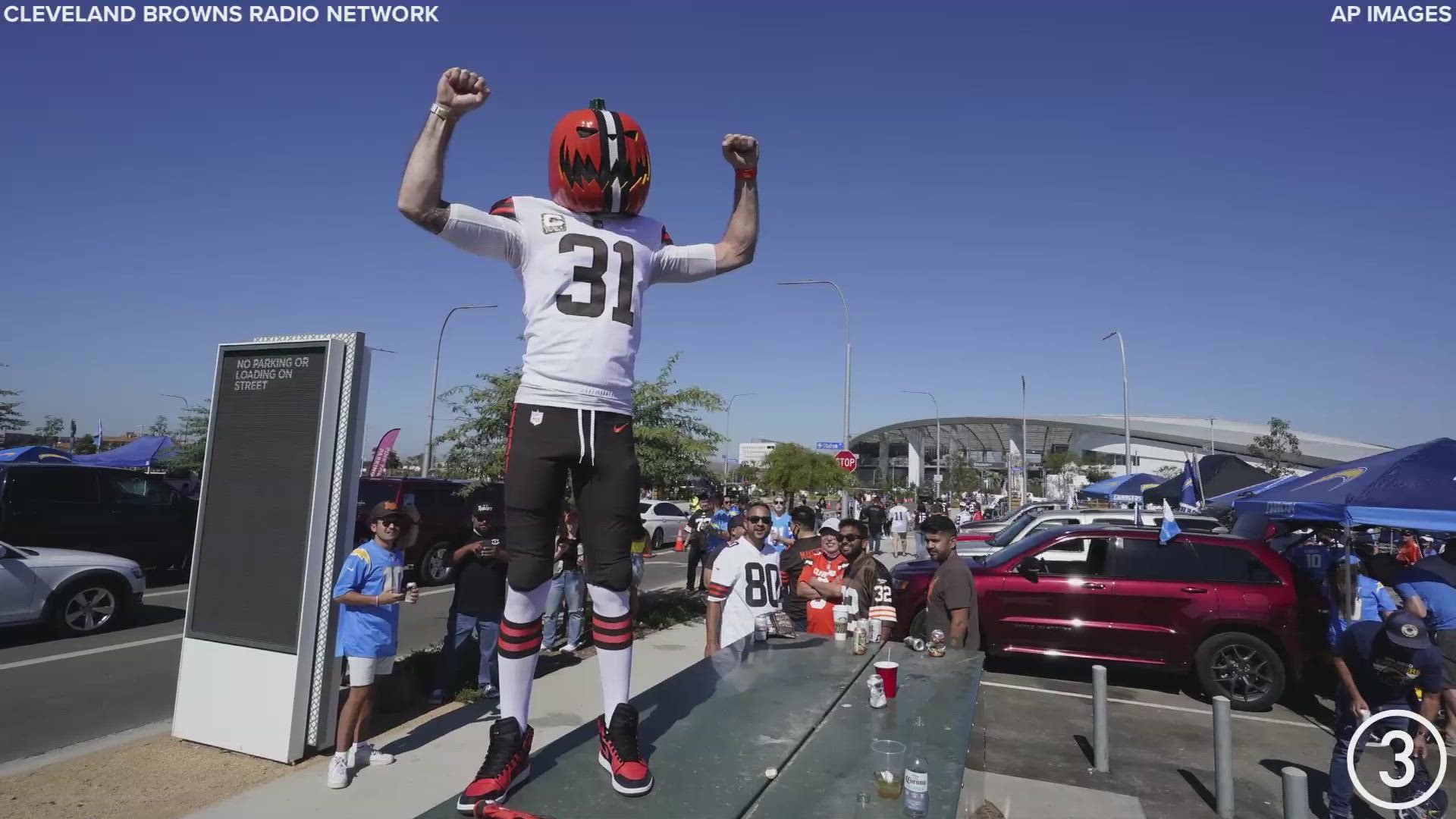 INGLEWOOD, Calif. — It was certainly fun to watch, but let's be honest, this one hurts.

Much of Cleveland's defense was banged up, with Jadeveon Clowney, Jedrick Wills Jr., and Greg Newsome II all inactive. Star cornerback Denzel Ward later left the game with a neck injury, and young LA quarterback Justin Herbert subsequently lit up the secondary all afternoon long.

Herbert threw for 398 yards and four touchdowns, with 165 of those yards and two of those scores to Mike Williams. The young QB also ran for a TD while Austin Ekeler had 119 yards from scrimmage and found the end zone three times.

On offense for the Browns, Nick Chubb dominated with 161 rushing yards and a 52-yard touchdown, while Kareem Hunt added two more scores of his own. Tight end David Njoku also had arguably his best game as a pro, catching seven passes for 149 yards and a 71-yard TD.

Overall, Mayfield played well after a rough showing last week in Minnesota, completing 23 of 32 throws for 306 yards and two touchdowns. However, his chemistry with Odell Beckham Jr. seemed off once again (two catches, 20 yards, one drop), and the Browns struggled to move the ball on their final two series. Head coach Kevin Stefanski's play calling was also brought into question, as was the officiating.

Cleveland has still not beaten the Chargers on the road (regardless of city) since 1991, and has failed to earn a win against a Los Angeles-based team (home or away) since 1993. At 3-2, the Browns will return home next weekend to play the Arizona Cardinals, the NFL's only remaining undefeated team.

What follows is a comprehensive recap of today's action, with the most recent plays and updates closest to the top. Stay tuned for updates and analysis all day long on 3News and WKYC.com.

0:05: Baker Mayfield has one last chance at a Hail Mary, but it falls to the turf in the end zone. The Chargers will take a knee and get out with a win.

1:31 - Chargers 47, Browns 42: Following a three-and-out and in one of the most bizarre touchdowns you will ever see, Austin Ekeler scores from 3 yards out only because the Browns pushed him in. He had been attempting to run the clock out and set his team up for a game-winning field goal.

The two-point conversion attempt is also just short, and the Browns will have a chance to win it with no timeouts remaining.

3:15 - Browns 42, Chargers 41: More defensive breakdowns lead to a 19-yard touchdown by Austin Ekeler on a screen pass, but Tristan Vizcaino's extra point attempt is no good, and the Browns are clinging to a one-point lead.

THIS GAME IS RIDICULOUS

4:45 - Browns 42, Chargers 35: After Nick Chubb breaks free again but is just tripped up, Kareem Hunt finishes the job with an 8-yard touchdown run.

7:24 - Browns 35, Chargers 35: Aided by a highly controversial pass interference call as well as a fourth-down conversion, the Chargers tie it up on Austin Ekeler's 4-yard touchdown run.

10:40 - Browns 35, Chargers 28: Almost as quickly as they fell behind, the Browns retake the lead. Baker Mayfield finds David Njoku for his sixth catch, and "Chief" bounces off would-be tacklers and runs 71 yards for the touchdown.

The two-point conversion attempt is also good after Mayfield flips it underhand to Austin Hooper.

11:22 - Chargers 28, Browns 27: The Browns punted twice and the Chargers once over three combined possessions, but LA ends up hitting another home run ball, as Justin Herbert finds Mike Williams all by himself again for a 42-yard touchdown.

6:25 - Browns 27, Chargers 21: With so many players injured, the Browns struggle to contain the Chargers' passing game. LA converts on two fourth downs before Justin Herbert runs it in from 9 yards away.

12:18 - Browns 27, Chargers 13: Nick Chubb has arrived on the red carpet, folks. The star running back takes Baker Mayfield's handoff and dashes 52 yards down the sideline for the touchdown, and the Browns lead by two scores for the first time today.

0:00 - Browns 20, Chargers 13: Cleveland settles for a 31-yard Chase McLaughlin field goal to give them their largest lead of the day at the half.

0:38: Could the Browns get even more points before halftime? They'll have a chance now after Malik McDowell (back from the medical tent) recovers Austin Ekeler's fumble at the Chargers 22. Rookie Grant Delpit knocked the ball loose.

0:54 - Browns 17, Chargers 13: Another Browns possession equals another long drive, and once again Kevin Stefanski decides to go for it on fourth down. This time, Kareem Hunt not only picks up the line to gain, but rumbles into the end zone for a 3-yard score.

6:54: Following the breakdown on their last series, the Browns' defense recovers as Malik McDowell breaks through and sacks Justin Herbert. Demetric Felton returns Ty Long's ensuing punt to the Cleveland 47.

Unfortunately, McDowell hurt himself on the play and is currently in the injury tent, while Pro Bowl corner Denzel Ward is questionable to return with a neck issue. Fellow corner Greedy Williams is also banged up, but remains in the game.

8:12: The Browns drive deep into Chargers territory again, but decide to go for it on fourth-and-2 from the 17. Baker Mayfield finds Odell Beckham Jr. open, but the former All-Pro drops it, and LA takes over on downs.

11:43 - Chargers 13, Browns 10: Like a bolt of lightening, the Chargers strike back, as Justin Herbert finds a wide-open Mike Williams for a 72-yard touchdown. Tristan Vizcaino's extra point attempt is hooked to the left, and it remains a three-point margin.

2:44 - Chargers 7, Browns 3: Despite being pinned back at their own 15, LA cuts through the Cleveland defense and tight end Donald Parham Jr. finishes things off with a 22-yard catch-and-run touchdown. The Chargers were aided by a Browns illegal contact penalty on third down.

7:39 - Browns 3, Chargers 0: Following an LA three-and-out, Nick Chubb and Kareem Hunt lead the Browns on a 75-yard drive. It nearly turns to disaster when Baker Mayfield is hit and fumbles, but Cleveland recovers, and Chase McLaughlin ends up hitting a 35-yard field goal.