Tom Herman spoke with the media reflecting the loss to Baylor and looking forward to the regular season finale against the Red Raiders. 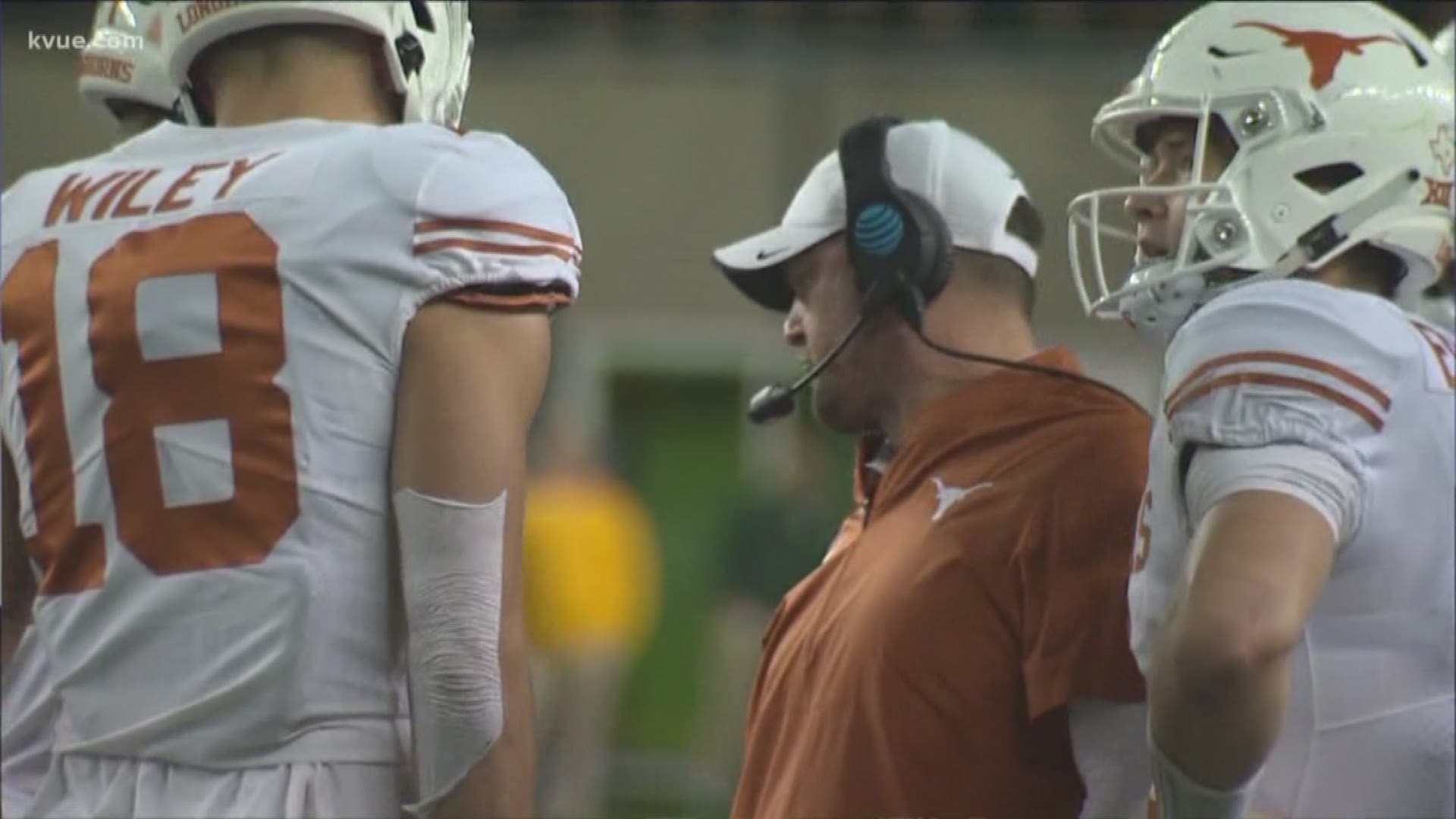 AUSTIN, Texas — Texas lost its fifth game of the season after falling to Baylor 24-10 in Waco on Saturday.

With the loss, UT was eliminated from Big 12 title contention. The Longhorns return home in their final game of the season, where they will host Texas Tech on the day after Thanksgiving. Kickoff against the Red Raiders is scheduled for 11 a.m. on Nov. 29.

Tom Herman spoke with the media reflecting the loss to Baylor and looking forward to the regular season finale against the Red Raiders.

Tom Herman opening statement: "Obviously really disappointed in the last couple of weeks. Not just in the outcome, but how we lost those games. My message to the team is we're not where we had expected to be. We haven't played to our standard. We haven't coached to our standard. But none of that matters this week. This week, we owe it to our senior class – who has done so much for this program since we got here. Everyone in that locker room should feel a debt of gratitude toward them and want to repay them by making their senior day really memorable. It's a short week and really difficult on the coaches and players. We did not practice (Sunday) as we normally do. Injury update ... Juwan Mitchell aggravated a hamstring issue he's been dealing with during pre-game. Anthony Cook is still going to be out. Cade Brewer is still out, but he is recovering and we should have him back for the bowl game. Sam Cosmi sprained his ankle, so he'll be very limited today. Devin Duvernay has a contusion on his knee that swelled up, so he's going to be limited today. Jalen Green had an ankle sprain and he's going to be questionable. Keaontay Ingram is improving from his ankle sprain. Collin Johnson is probably [coming back] bowl game. DeMarvion Overshown ... another ankle sprain that we're hoping will improve over the course of the week. Jordan Whittington ... we re-MRI'd his pelvic area. There's no abnormalities as far as anything unrelated to the pubalgia. We've sent those pictures off to the doctor in Philadelphia and waiting for him to evaluate them. J-Whit has just been in a lot of pain, so we need to figure out what's going on with him."

Cade Brewer – out, will come back for bowl game

Collin Johnson – out with hamstring, will be back for bowl game

Tom Herman on how his head feels after head-butting Malcolm Roach in Baylor pregame: "My head is fine. If the nation had been paying attention, they'd realize I did that at Ohio State and every game at Houston. So, that's nothing new for me. Like I said in post game, in old age, I've kind of got away from that. I was pretty pumped up about the game and I know our guys were, too. Kind of spur of the moment, it hit me. It's been happening quite a bit."

Tom Herman on gradual offensive regression in 2019 season: "In the staff meeting, I did say that these were good kids that were going to want answers. In my opinion, when you play such unique defenses in back-to-back weeks, there is a fine line of saying, 'hey some of our base stuff is not going to be good.' We can't do X, Y and Z because they're going to be in position A, B and C. We thought the game plan was great. I remember asking Sam and he was saying, 'yeah coach, I love it. I feel better about it than Iowa State.' We didn't do a good enough job as coaches of getting that plan executed."

Tom Herman on audible play-calling process in his staff: "We put some of it on Sam [Ehlinger] and he's done really, really well. He's super sharp. In today's day and age, it used to be where you could line up in a formation and look back to the sideline, see what they were in and the defense wouldn't move. With pressure checks versus blitz have to come from the quarterback. We give [Ehlinger] some pressure checks all year and he's done a great job with them. A lot of the communication is pre-snap ... what are they in? Is it a look back play where we have to give Sam some information? The press box obviously has a much better view of that than I do. In between series, there is talk of 'okay this is working because of this' and then you have a mini-script, if you will for the next series. Then obviously, third down throws a wrench in that. That gives you a little insight into the process."

Tom Herman on staff's job of developing high-level talent from top recruiting classes: "No. No. We haven't. I haven't. The players haven't. We're all in this together, but at the end of the day, the buck stops with me. That is a big charge of mine in the offseason is to find a way to get these guys better developed. Put them in better positions to succeed. Then comes the part where the player needs to take the necessary steps to be developed."

Tom Herman on recruiting classes from pre-Tom Herman era: "We're past that. We've got one class left that were recruited from a previous regime and for the most part, they're bought in."

Tom Herman on his career mentor(s): "Coach Brown, certainly, just because he knows this place. Coach Davis, I think having Larry Fedora in the building every day has been really beneficial for me. Those are the ones. The circle is small, I can tell you that."

Tom Herman on showing he cares while being a demanding head coach: "My job is to protect the culture, not feelings. I do think this comes up when you're not experiencing the success that you want. The vocal minority gets a lot of the attention. Go ask Sam Ehlinger if he thinks I'm 'bad cop'. Or Collin Johnson. Or Devin Duvernay. Or Malcolm Roach. Or Joseph Ossai. Or Keaontay Ingram. The list goes on and on of guys that know and understand I care about our players. It's important to me. The one word I think that's so important to understand is 'parental'. We are going to shower them with unconditional love. We are going to provide them every resource there is to be successful. But we're also, like a parent should ... I hope ... hold them to a very high standard."

Tom Herman on coaching staff failing to develop players this year: “Yes. You evaluate. We’ve got a saying around here and I learned it from Coach Meyer … I’ve been on staffs where the position coaches aren’t getting the response from a kid and it’s …’that freaking kid, that kid’. No, that coach. You’re the adult. You’re the one that does this for a living. We’re never going to blame the players so it’s our job … we recruited them and their personalities. It’s our job to find the right buttons to push, if you will. If you’re giving them these tools and the young man is not using those tools, then it’s still your job to educate them on why it's important to use those tools. There’s a definite fine line between ... leading a horse to water, but you can’t make it drink. I don’t know … dunk his head in the water or lead him to a different trough. Figure something else out. We’ve got to figure out this offseason where we’ve failed and make sure that doesn’t happen again.”

Tom Herman on facing Texas Tech in finale: “I don’t know that we’ll be tight. I imagine they’ll be loose ...  at Texas, we’re going to get everybody’s best shot. We know we’re going to get Texas Tech’s best shot. I think the biggest motivation is not a winning record … I think it has to be those seniors and really paying tribute to what they’ve meant to the foundation that’s been set here.”

RELATED: Here's a look into 120-plus years of Texas Longhorns vs. TCU Horned Frogs history

Tom Herman on if he’s the right man for the job?: “I’m not shaken. I'm obviously in big-time evaluation mode of everything throughout our program, I’m not going to bury my head in the sand. It’s my job to make sure that we play to the level that is expected at the University of Texas. Am I the right man to do it? I believe I am … you’re asking me … did you expect that I’d say no and just walk off and just drop the mic or something (laughing).”

Tom Herman on is this the hardest coaching year?:  “The first year here? That was pretty tough.”

Tom Herman on senior class:  “They stayed when they got here and they bought in. A couple took longer than others but with this group when you say jump they say how high? They don’t ask questions. They’re unbelievable soldiers. We will forever be indebted to them because of their development.”