After losing to TCU, Tom Herman said the bye week came at the perfect time and the team is focused on going 1-0 versus Kansas State. 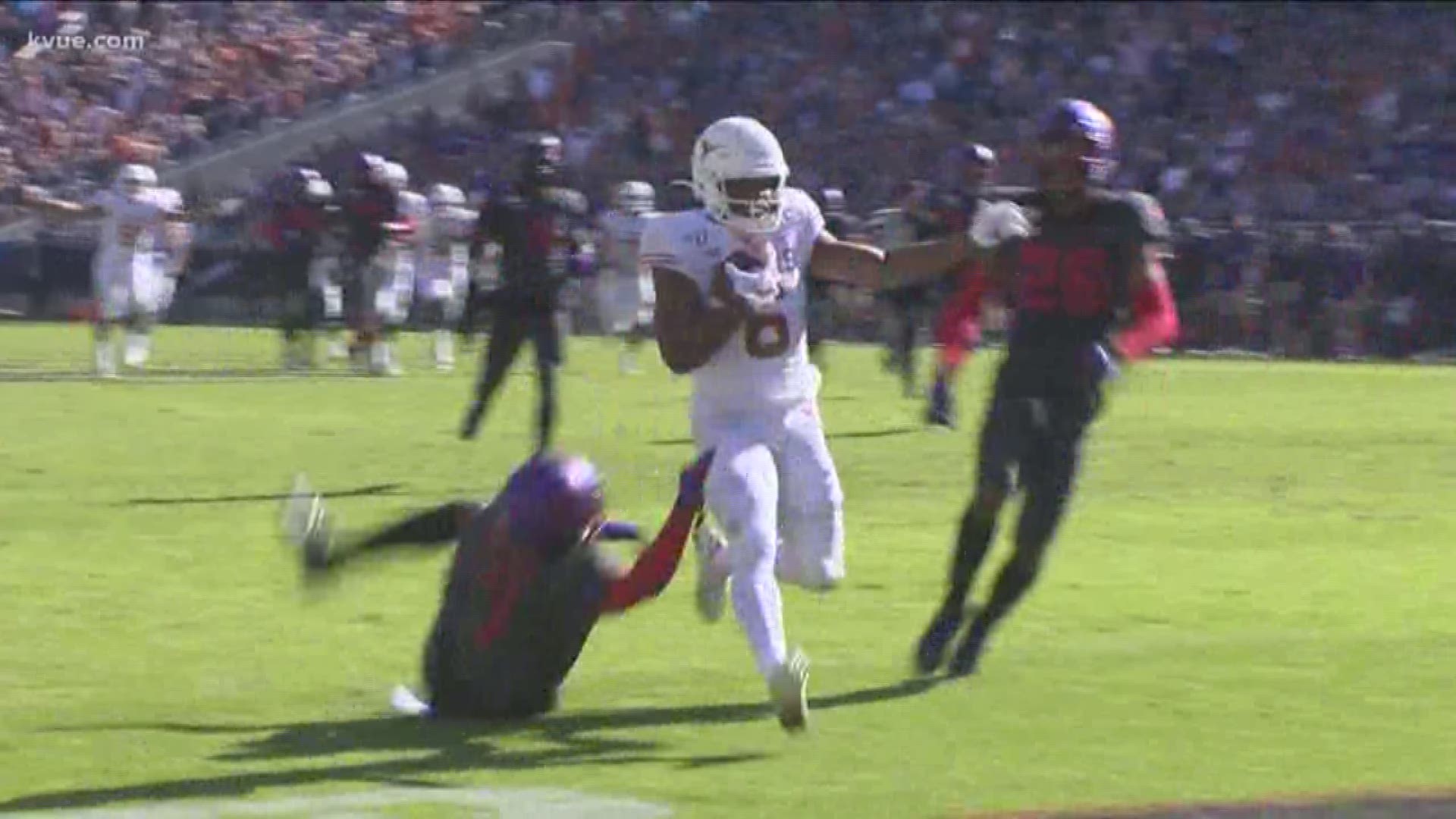 AUSTIN, Texas — After Texas' second bye week of the 2019 season, the Longhorns return to action as they host Kansas State on Saturday.

The Longhorns last game ended in an upset in Fort Worth, where the TCU Horned Frogs knocked off Texas, 37-27. Texas head coach Tom Herman addressed the media in his weekly Monday press conference.

Here is what Herman talked about:

Tom Herman opening statement: "Really refreshing to have the open week where it was. I know our players got to get away. Go home. Most of them did. Gave them Friday after class off, all day Saturday, and had a late check in on Sunday. You could tell a lot of these guys – especially the young guys – had just hit a wall in terms of the daily grind of college football. We got a chance to get some guys healthy. Jeffrey McCulloch ... we're going to try like heck to get him back into practice. B.J. Foster would certainly be probable. DeMarvion Overshown, a lot like Jeff, but he is cleared to practice. Still a little bit weak in that shoulder, but we're hoping the next 24 to 48 hours speeds up. Caden Sterns is probable. He practiced on Sunday. Jordan Whittington, same thing. He practiced yesterday and Wednesday and Thursday of last week. Excited about Kansas State coming in. They're competing for a conference championship bid, just like we are. We're going to have two teams here in Austin with a lot to play for. I know our guys are excited to be back at home and fix the things that ailed us in previous weeks."

Jeffrey McCulloch – hasn’t practiced, but hopes to by Tuesday or Wednesday.

Jordan Whittington – has been practicing.

Tom Herman on conversation with assistant coaches during bye week: "The tenor was that there is a level of expectation at the University of Texas in all three phases. And we are not quite achieving that, not firing on all cylinders. It's our job to figure out why and figure out what the players we are playing with do best. There was a deep dive into what can we do really well with these players we will have the next four weeks."

Tom Herman on what the team is capable of doing moving forward: "Going 1-0 against Kansas State. I honestly needed to ask somebody .. you guys think this is like an act or this is fake ... after being around me for three years ... I literally had to ask somebody today in case I get asked that question, 'who do we play after Kansas State?' I honestly didn't know. It's irrelevant to what we have in front of us."

Tom Herman on Kansas State offense and their quarterback Skylar Thompson: “I think Skylar Thompson is actually really thriving in this new offensive system. When you see them, they’re going to play with fullbacks, multiple tight ends …you think it’s a very conventional, old school offense. It’s not. They're very creative with what they do ... it’s kind of fun to watch. It will challenge our defense being that it’s the first of its kind. He’s like most quarterbacks in this league. He’s the gas that makes their engine go. The unique thing that they do is they line up in these big personnel groups … yet they’re in the (shot)gun. It’s very unique in what they do in terms of a scheme standpoint, things we haven’t seen. It’s nice to have the two weeks to prepare for a very talented quarterback and a very unique system.”

Tom Herman on working on relationships with players during bye week: “It was a nice opportunity for me. I think I still have two or three to go from the 2019 class. Had their coaches cut up a 10-20 play reel and carved up 45 minutes or so to really coach. As a head coach, I miss coaching players. It was really good to reacquaint myself with those guys. All of them are in great spirits. It’s a very personal decision if a player should come in January and graduate early. It’s a much different mindset compared to a guy that gets here in June. I think my relationship with the guys in that class was solidified a bit. We’ve got to continue to foster the relationships between our older guys and younger guys. I asked our leadership council yesterday … how many of you guys live on campus. It’s the older guys challenge … they’ve got precious time with the young guys. They've got to make the most of it and be intentional with it.”

Tom Herman on looking inward at tendencies during bye week: “There’s a lot of self-scout, probably a little bit more in an open week than normal, but we’re constantly trying to do that. In this game, you never want to be a jack of all trades and a master of none. But you also have to have enough variety so you’re not a sitting target. I think the biggest challenge offensively, where we got a lot of closure ... Kansas State's opponents' offenses are averaging 58 plays a game. They're third in the country in time of possession.”

Tom Herman on if their confidence is shaken: “No. There is no confidence shaken, whatsoever. There are a lot of reasons why these guys haven’t been that. We just continue to chop away at giving them the tools to achieve at the level that we all think that they can. I thought we had great bye week practices. I don’t think anyone’s oblivious the long term goal of competing for our conference championship. We left the margin of error very slim and that’s OK. We know we’re on the ropes. You can do one of two things … you can fight your way off the ropes or tell your trainer to throw in the towel. It’s been a really good week and a half.”

Tom Herman on sense opponent’s confidence: “I don’t know if you can get in their head. If they’re not confident, they should be. They’re playing really good complimentary football. They're not giving up a whole lot of points or giving up big plays. I don’t know what their psyche is as a team, but I do know they’re playing well in all facets right now.”

Tom Herman on decision-making of Sam Ehlinger, confidence shaken after interceptions: “No issues. I had an issue with one throw. He had one bad decision and it was the throw to the sideline to Jared Wiley, he should’ve thrown that one away. The other two were receiver errors. And the last one, on fourth down in a two-minute situation, the ball has to come out of your hand and you hope your guy can go make a play. He’s fine. You hate to see those numbers on a stat sheet, but we know the decision-making … aside from the one throw … his decisions were spot on.”

Tom Herman on Caden Sterns: “Obviously, experience. He’s just like you guys saw most of last season. He has a knack for the football. He doesn’t mind throwing his body around at all. Extremely smart football player. Very well-prepared. He’s going to study every tendency and be able to translate those studies into gaining a step or half-step on certain plays.”