Check out live score updates and the latest highlights from the Texas vs. Iowa State game here. 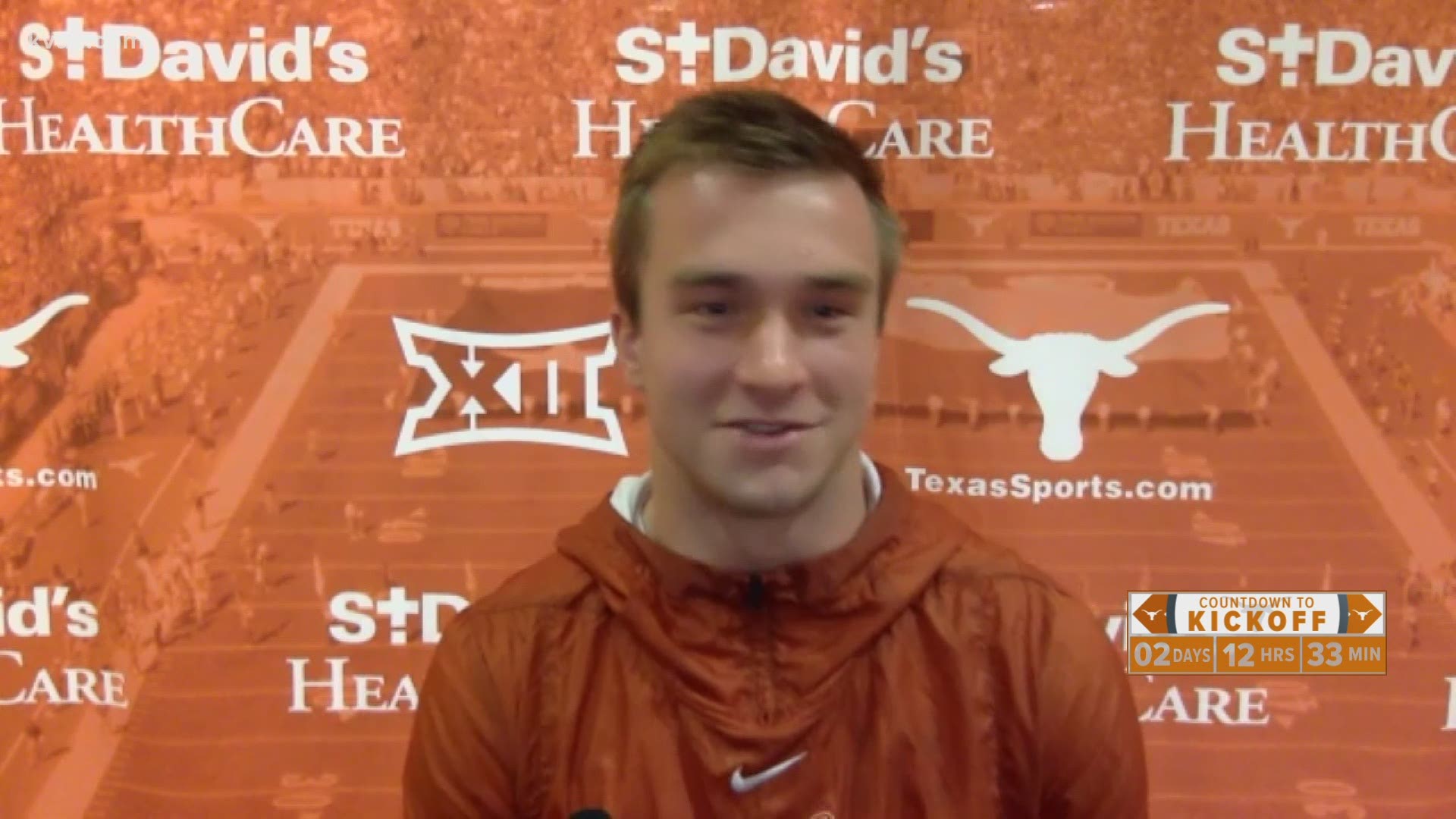 Editor's note: Here's how you can watch the game on KVUE. Here's where you can listen to the game on the radio.

Texas led a close game at halftime, 13-10, but a 10-point, fourth-quarter comeback pushed the Cyclones over the Longhorns in Austin. The Cyclones' win was the second straight, but first in Austin since 2010.

UT's defense held the Cyclones' running game at bay in the first half, but Big 12 leading rusher Breece Hall finally found paydirt in the second half. Hall finished the game with 91 yards on 20 carries. Iowa State quarterback Brock Purdy led the way though with 312 passing yards and one touchdown.

For Texas, senior quarterback Sam Ehlinger threw for 298 yards, ran for 65 more, and scored UT's only touchdowns in the senior day loss.

Texas had a chance to tie, but following a sack on third down that backed up UT offense into a long 57-yard field goal attempt, Cameron Dicker missed barely to the left.

"Heartbroken for our seniors. Heartbroken for the rest of the team, but we still understand that we have a job to do," head coach Tom Herman said. "That job is to prepare to try to go 1-0 in Manhattan, Kansas in eight days."

With the loss, UT moves to 5-3 on the season and 4-3 in the Big 12, limiting the Longhorns' chances of a Big 12 championship appearance to just 1%, according to ESPN.

"Hat's off to Iowa State," Herman said. "They've got a heck of a team and I'm sure they will represent our conference very well in the conference championship game. But my heart is broken for this senior class and everything that they have worked for for four years. We didn't do enough in this game to win it and Iowa State did just enough to do that. We will lick our wounds, wipe the tears out of our eyes and understand that this is not the last game. I know it feels that way with it being senior day and everything being on the line."

Texas is scheduled to play Kansas State next on Dec. 5.

Key moments/plays: Breece Hall opened the drive with an 18-yard run. Brock Purdy hit his tight end Dylan Soehner for 22 yards. Purdy connected with Charlie Kolar for another big gain of 17 yards to the Texas 12-yard line. Hall ran up the middle to the Texas two-yard line. Texas used its first timeout with 1:34 left in the fourth quarter. Hall ounched it in the end zone to give Iowa State its first lead of the game with 1:25 left in the game.

Key moments/plays: Bijan Robinson opened the drive with a four-yard run. Ehlinger threw an incomplete deep shot to Jake Smith and another incomplete pass on third down to Joshua Moore. Texas punted the ball away with 3:09 left in regulation.

Key moments/plays: Brock Purdy completed two passes of five and 10 yards on a drive that ended in the Cyclones being stopped short of a first down near midfield. Iowa State chose to punt the ball away with 4:09 left in regulation.

Key moments/plays: Sam Ehlinger connected with Brennan Eagles for 15 yards on a critical third down to keep the chains moving. Three more Ehlinger short runs got the Texas offense near midfield. Ehlinger continued to move the offense with a 30-yard strike to Jake Smith. Ehlinger and Bijan Robinson pushed the Texas offense to just outside the 10-yard line. On fourth and short, Texas went for it and Ehlinger stopped short on a run up the middle.

Key moments/plays: Brock Purdy completed a pass to Charlie Kolar for a big gain of 44 yards to the Texas 13-yard line. Purdy ran for three yards to the 10-yard line. A holding penalty backed up the Cyclones. Purdy looked for a pass over the middle, but the pass was incomplete. This ended the third quarter.

Key moments/plays: D'Shawn Jamison returned the kickoff to the 50. Texas was forced into a three-and-out. UT tried a fake punt, however, and the Longhorns were stopped short of the first down

Key moments/plays: Brock Purdy hit passes to Chartlie Kolar for gains of six, 31 and 17 on a drive to bring the Cyclones inside the Texas 10-yard line. Texas' defense held the Cyclones out of the end zone again and forced a field goal.

Key moments/plays: Sam Ehlinger started the drive strong with back-to-back passes for five yards and 17 yards. After two Roschon Johnson runs, Ehlinger connected with Brennan Eagles for a 45-yard shot. Ehlinger capped off the drive with a seven-yard touchdown pass to Jared Wiley.

Another deep shot connection from Ehlinger to Eagles 🤘🏈

TD Texas! After a 45-yard pass to Brennan Eagles, @sehlinger3 caps off the drive with a TD pass to Jared Wiley

Key moments/plays: Iowa State moved to midfield after a few completed screen passes by Brock Purdy. UT's defense stood tall on a third and short at midfield though and forced the Cyclones to punt.

The Texas defense has held the Iowa State potent rushing game in check thus far. The Big 12's leading rusher, Breece Hall has only 37 yards on 10 carries. UT started the game strong, taking a 10-0 lead, but Iowa State's Brock Purdy has kept the Cyclones in the game through the air.

Purdy has thrown for 146 yards and one touchdown on 14-for-23 passing.

For Texas, senior quarterback Sam Ehlinger has lifted most of the offensive load, accounting for 161 of UT's 218 total yards. Ehlinger has 132 yards passing, 29 yards rushing and a rushing touchdown. Freshman running back Bijan RObinson had 43 yards rushing on 10 carries in the first quarter, but was stopped for -1 yard on one carry in the second quarter.

Here is a look at the full first-half stats:

Key moments/plays: Brock Purdy completed two passes for 14 yards and nine yards to bring the ball close to the 40-yard line. Texas used its first timeout of the half with 1:05 remaining. Purdy completed a pass over the middle to bring the Cyclones offense to midfield. Purdy ran for two yards and a first down. Iowa State called its second timeout with 27 seconds left. Purdy completed a 16-yard out route to Charlie Kolar to get the offense to the Texas 23-yard line. Texas used its second timeout of the first half with 15 seconds left. Iowa State took two shots for the end zone, which both fell incomplete. Iowa State used its final timeout with nine seconds left. The third and final pass for the end zone was broken up by the UT defense. Iowa State missed the 41-yard field goal to end the half.

Key moments/plays: Texas stalled at midfield and punted the ball away.

Key moments/plays: Brock Purdy completed a 20-yard pass over the middle to Dylan Soehner. A big run by Breece Hall on the next play was wiped out by a holding penalty. Purdy picked it back up with a 13-yard scramble. A few plays later, in Texas territory, Purdy ran for seven yards on third and eight. Iowa State went for it on fourth down and converted with a six-yard Hall run to the Texas five-yard line. A false start penalty backed up Iowa State. UT's defense held strong and forced a field goal.

Key moments/plays: Sam Ehlinger threw another deep pass intended for Joshua Moore, which fell incomplete but drew a pass interference penalty. Ehlinger picked up 12 yards on a quarterback-designed run. After back-to-back runs for loss, Iowa State called its first timeout before third and long. UT did not convert the third down and kicked the 47-yard field goal. Dicker missed the field goal, but a defensive penalty moved up the field goal attempt five yards. Dicker made the 42-yard field goal.

Key moments/plays: Sam Ehlinger picked up eight yards on a scramble after a broken play. Ehlinger hit Jordan Whittington for 13 yards and Roschon Johnson helped UT cross midfield with an 11-yard run. Ehlinger completed a pass over the middle to Tarik Black, which was jarred loose after the catch. The call on the play was a catch and fumble recovered by Iowa State. The play was reviewed and the call on the field stood.

Key moments/plays: Brock Purdy moved the Iowa State offense with short passes of five yards, seven yards and five yards. A penalty on the UT defense moved the ball past midfield. Purdy ended the drive with a 35-yard touchdown pass.

Key moments/plays: Texas rode the legs of freshman running back Bijan Robinson for runs of 10 yards and 18 yards. Sam Ehlinger hit Brennan Eagles for an 18-yard pass and Ehlinger capped off the drive with a 17-yard touchdown run.

Key moments/plays: Texas forced a three-and-out on the first drive.

Key moments/plays: After a few run plays, Sam Ehlinger hit Brennan Eagles on a deep shot for 59 yards to put UT inside the five-yard line. The Cyclones defense held strong and forced UT to kick a field goal on the opening drive.

Big play over the top to Brennan Eagles on the opening drive!

RELATED: No. 17 Texas Longhorns vs. No. 13 Iowa State football game to air on KVUE

The UT game comes after the team's bye week, followed by a game postponement versus Kansas last week. The game was postponed due to Kansas's "inability to meet the minimum position requirements established by the Big 12 Conference," according to a release from Kansas Athletics.

The University of Texas will also erect a statue of Julius Whittier, the Texas Longhorns' first Black varsity football player, in the north end of Darrell K Royal-Texas Memorial Stadium. The statue will be unveiled on Friday before the Texas-Iowa State game.

"A civil rights pioneer with a football uniform on."

Catch the highlight breakdown and full-game analysis after the game on KVUE news at 10 p.m.