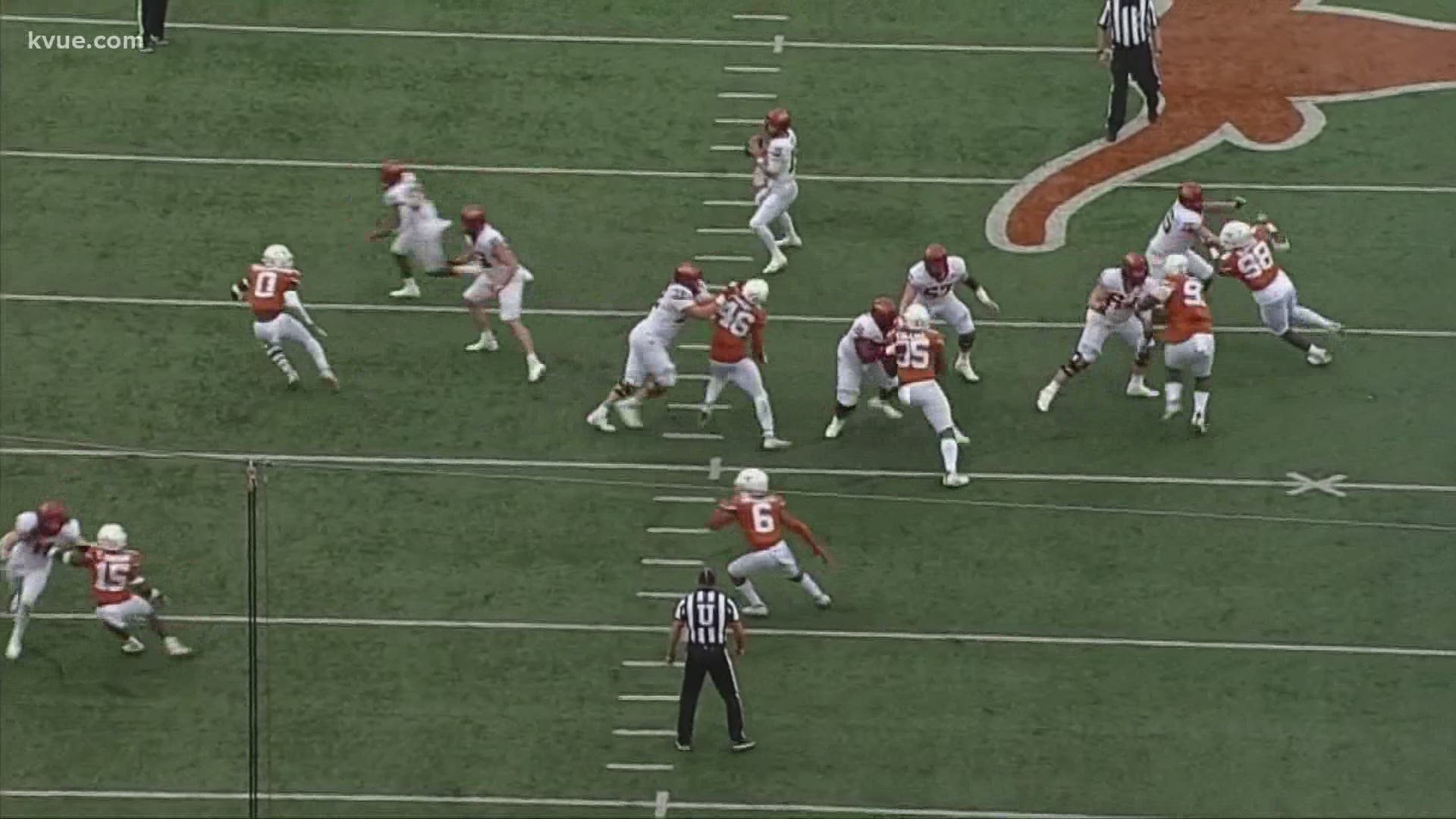 AUSTIN, Texas — The Texas Longhorns return to the road for the last two weeks of the 2020 season and will travel to Kansas both times. First up, the Longhorns will go to Manhattan to take on the Kansas State Wildcats.

UT is coming off of a 23-20 loss to Iowa State that effectively eliminated the Longhorns from Big 12 title contention.

Leading into this next game week, senior left tackle Samuel Cosmi has already announced he will sit out the rest of the season to prepare for the NFL Draft, where he is a projected first-round pick. Later on Monday evening after Herman's press conference, junior safety Caden Sterns also announced he would forgo the rest of the 2020 season – and also his senior season – and declared for the 2021 NFL Draft.

Here is a look at what Herman said in the press conference:

"Well, obviously, extremely disappointed and heartbroken, especially for our seniors in the outcome of last week's game. But, you know, the, the sun came up and our guys are a very resilient group and they understand that we've got a job to do here. That was not the last game. And we've got a job to do, which is to prepare to make the most of an opportunity to go 1-0 in Manhattan, Kansas. You know, we're still fighting for some really good bowl games. We're fighting for a really, really good record. And we're fighting to give these seniors an opportunity to go out with four straight winning seasons and hopefully four straight bowl game wins as well. So, wipe the tears from our eyes, picked ourselves up, dusted ourselves off and got back to work yesterday. And like I said, I couldn't be prouder of the resiliency of this team to get back to work yesterday. Obviously, as you guys know, Mondays on a normal week, [are] our days off. So, guys are focusing on academics today as well as treatment and studying Kansas State on their own. And we'll get back to work on the field tomorrow."

Herman on Chris Del Conte's support level and if he got on the phone with any recruits:

"No, I haven't. I haven't needed to. That, that offer still stands as per our last conversation this weekend. And he knows as well as I do that the main focus needs to be on preparing to beat Kansas State in Manhattan, but, you know ... that offer was, was reiterated to me."

Herman on why there's been a lack of production despite high recruiting classes, etc.:

"Well, I think any, any answer I give you right now ... is going to come across as an excuse. And so, I'm going to focus on Kansas State and, you know, an opportunity to go 1-0 ... We'll evaluate the things that we did poorly and go back to work to, to fix those things in the offseason. And, but right now, that wouldn't be fair to our players if, if I were continually looking in the rearview mirror as to why certain things happened the way that they happened rather than prepare to beat Kansas State, and that's what we plan on doing."

Herman on where the standard should be at Texas:

"I think the standard should be where I always have expressed it to be, which is to be in the conversation and to be competing for conference championships in the month of November and December. We were there this year. We were there a short two years ago. And this year, we came up three points short. And our opportunity to advance to play another game, you know, inching our way towards that."

How much better is this team than when Herman first took over as head coach?

"I don't know the measurement of 'better.' I do know, again, that we've won a lot of games around here, a lot of big games ... beating our rival. We've been in top 10 teams. We've played in New Year's six bowl games. So, that's for you to decide and that's for everybody else to decide how much better all of those things are. Ten-win seasons ... New Year's six bowl games ... beaten top 10 opponents. The measurement of better, I don't know, that's for you guys to debate, but, you know, those are the things that have happened. I mean, that's indisputable."

Herman on the clarity he has if he'll be back next season:

"I am absolutely and completely focused on getting our team ready to beat Kansas State and not worried about anything other than that. Every conversation Chris [Del Conte] and I have are great. We've got a great relationship. And, you know, we have great conversations."

Herman on Samuel Cosmi and who will replace him at left tackle for the final two games:

"Extremely proud of Sam, you know, to come in as a very unheralded 3-star recruit ... be developed by Yancy McKnight, Herb Hand into a potential first-round draft pick. My initial reaction was just an enormous sense of pride. [You] know, this was a guy that by his fourth year was voted a captain by his teammates, developed himself along with the help of our coaches and strength coaches into what he is today. And we can't thank him enough for everything that he has given to this program, to this university. And we'll miss him. But he will certainly always be a part of this family. And to answer the second part, I think right now a lot depends on Kerstetter's, his health. In yesterday's practice, we had, because obviously, Derrick didn't practice, we had Christian Jones at left tackle with Jake Majors at center and Reese Moore at right tackle. But that was a 45-minute practice ... We'll play the, the shell game a little bit and give a lot of those guys some opportunity there to show if they are ready to take on a Kansas State team that, 'Wow, are they good upfront,' you know? Fifty-six ... twenty-nine ... ninety-two ... I mean, these guys are, I think, they're one of the top teams in the country in sacks and TFLs, one of if not the top team in our conference in sacks and TFLs. And so, we're going to have our hands very, very full with that defensive front."

Herman on getting back on the winning side of things:

"We're doing well in the 2021 class. We've still got a few spots to fill. You know, COVID has pushed some of these guys' decision dates back to February, which allows us some time. But, I'm excited about the 2021 class that we have committed. But we all know, we've got to win those games that we lost by three points on Saturday to generate momentum ... but I think those that are committed and those that will be committed understand that we're on our way. And that we definitely have the pieces. They believe in what we're doing, and we're happy with the 2021 class. We got to finish that up. And, you know, we've got, again, we're a little bit behind everybody else simply because of the relationship aspect from the new coaching staff and the COVID issues that presented, that were presented in recruiting with the inability of our new staff to get to know some of these young men. But again, I feel really good about the class of 2021, especially if we land a few more guys that we think we've got a great shot at doing, and then we'll be full steam ahead on the class of 2022."

Herman on if they'll consider playing Hudson Card or Casey Thompson at QB:

"No, this is Sam's team. He's a three-year captain and he deserves to play his final season all the way through. And we're going to give him every opportunity to do that."

Texas is scheduled to kickoff against Kansas State on Saturday, Dec. 5, at 11 a.m.