Tom Herman addressed rumors about his job security, playing against a winless Kansas team, gave an injury report and more. 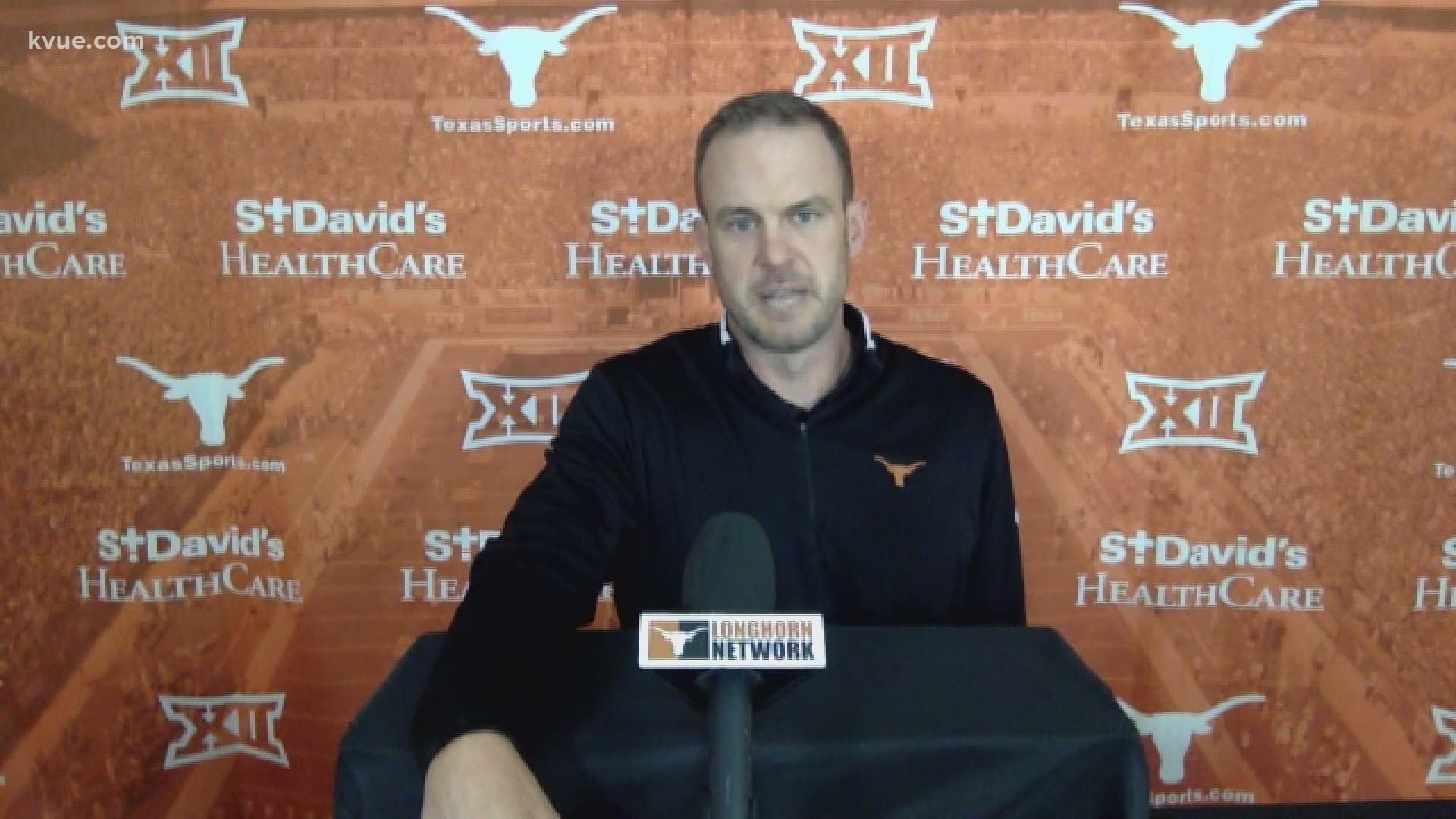 The Texas Longhorns return to action after a bye week, and will travel to Lawrence, Kansas, to battle the Kansas Jayhawks.

Kansas enters the matchup winless in 2020 with an 0-7 record. Texas, on the other hand, is looking to secure its third road win of the season and continue to build on its three-game win streak after losing back-to-back games against TCU and Oklahoma.

On paper, this game seems to be a cakewalk for the Longhorns. But, Kansas has played the Longhorns tough in recent years, so don't count the Jayhawks out. In the past four seasons, three of those four games were decided by one possession. UT lost to Kansas in overtime in 2016, the year before head coach Tom Herman arrived. Then, UT squeaked out a 24-17 win in Lawrence in 2018 and won a shootout battle in Austin in 2019, 50-48.

In his weekly press conference on Monday, Herman addressed rumors about his job security and about former Florida and Ohio State coach Urban Meyer being named as his replacement.

Here is a look at what Herman said in the press conference:

NCAA in talks with Indianapolis to host 2021 March Madness

“Feel like we got a lot of work accomplished last week both on the field and off the field. To rest and to recover and … every bye week is a mad dash to play catch up when you have seven new coaches, a brand new offensive and defensive system. You’ve got everything … a really weird training camp, and you come back in and have a sense of normalcy in June. Our kids have handled a tremendous amount of adversity … not just for the day or two we get off but for the ability to play catch up on all of the reps and teaching, instruction and learning moments that we missed throughout the pandemic. I thought our kids handled the bye week and the one prior to really, really well and I’m appreciative of them.”

Herman on his confidence that 2020 season will be completed

“I know it sounds like coach speak … I don’t think about those things. We are so focused on Kansas right now and our team and where we need to improve that there’s really no space in my brain to be occupied by things we can’t control. I don’t have a great answer for you. We’ll let those decisions be made by people that are not coaches.”

Herman on the difficulty of playing Kansas

“Playing on the road is difficult. You look at a record and can be … if you’re not mature enough … can be swayed by that record. I think we’ve got a mature group of guys that have gotten tremendously better. Three out of the previous four years… recent history has shown that we’re going to need to bring our ‘A’ game to win the game.”

How is Texas utilizing young players with an extra season of eligibility?

“The whole world is up in the air. You play it by ear and take it day by day. We have used the bye week to get the young guys some reps. Really, really excited and pleased … if they stay together, just myself and Kevin Washington and Yancy McKnight. We think there’s a lot of potential starters in that group … if they continue to develop … they’ve got a very high ceiling as a class.”

Why has Texas struggled with Kansas recently?

“It doesn’t matter. They all count the same. A two-point loss to TCU counts the same as a seven-point victory against Oklahoma State. We got the job done which is job No. 1. To answer why? Human nature is difficult to defeat. I fight human nature every single day. Eighteen to 22-year-olds are going to look at records, point spreads and articles and our job is to bring them down from that. We’re going to get everything they’ve got. A team that you see on film is not the team that you’re going to play in Lawrence. I would imagine those guys that were out are healthy and fresh. We’re going to get their best shot, and we understand that and it is our job to respond to that.”

“Yeah, it does. That would be unfair to every single player that put their body on the line this season to say that it doesn’t count or to say the result is lessened due to any circumstance outside of their control. I don’t think that’s fair to the players and coaches or the team. You see teams starting off 1-3 and 0-4 and you feel for teams like that because you know what it was like these last eight or nine months … there are just so many obstacles that have been presented to these teams and staffs and players ... it's a minor miracle, and we’re just a few weeks away from a conference championship game. Hats off to the Big 12 and their leadership for stepping out on a limb and saying we’re going to do this and, knock on wood, we’ve done it pretty well.”

Herman on if he's concerned about his job status. How do the rumors affect recruiting?

“Not at all. I’m concerned about our players. I’m concerned about this program. I’m concerned about beating Kansas. I’m concerned about all of our goals still being in front of us. With the players, it’s really easy. They’ve seen it all and they’ve done it all and it’s almost comical at times to them because they know the truth. The biggest mitigating factor is… there’s a section of people intimately involved in the day-to-day operations of our enterprise that know the truth and then there is rumors. There are unnamed sources. There are internet reporters with agendas that claim their own opinion as fact and hide behind unnamed sources. The player part is really easy … almost comical to the point where a kid will come up to me and say ‘coach, you’ll never guess what came across my feed.’ The recruiting part is a different story, because when you have the things that have been written about us and our program. Myself and our future … very unfounded articles that state opinion as fact. That's very hard to defend against. If I’m a competing recruiter, you press print. Because you say ‘look, this must be true.’ That’s the hard part of recruiting because these 16-year-old kids are very impressionable and unfortunately when negativity gets written then it makes our competing recruiters' job just so much more easy. As far as the reality is concerned, we understand that we have the support of thousands in our fan base. We understand the difference between vocal minorities and people who make decisions and their beliefs. I couldn’t be more aligned with our athletic director, my boss, who we meet with constantly and has assured me of his support and the support of university leadership … and has even commended me and our staff on how we have handled the craziest year in college football history. [Del Conte] has even offered to … if a recruit wants to talk to him, to give the recruit his number. It gets exhausting more than anything to have to extinguish all of these unfounded, baseless claims that are hidden behind unnamed sources and agendas. I don’t know why it’s more here than other places, but it is. I couldn’t be happier with our staff, couldn’t be happier with that locker room and the players in it. We were brought here to build something to sustain levels of success and we’re very, very happy and proud of our trajectory in getting that job done here for years and years to come. As has been told to me, so is the leadership at this university.”

Is the Big 12 playing better defense this season?

“I do think that the defenses in the Big 12 have gotten better as evidenced by West Virginia continuing to do what they do, defensively. I’m sure I got accused of coach speak by crediting their defense. We have some really, really good defenses in this conference. Our defense is playing well right now, as well as Oklahoma State’s defense. I think some of it may be breaking in new quarterbacks. There’s a lot of rhythm involved. I think to say that there’s one thing … would be a fallacy. I think each and every defense is different and we’re growing. For a team like West Virginia, their front six is a veteran group. I think as you see the experience level on that side of the ball go up and the amount of repetitions in a certain system then production goes up. Once you get the tackling issues under control, that allows you to play assignment sound football on defense.”

Who will be the holder with Bujcevski out? How did the passing game improve during the bye week?

How to get the team to focus on winless Kansas with goals of winning the Big 12 Conference?

“It’s pretty simple math. You can’t win them all until you win the first one. We’ve got to prepare to beat Kansas as if it’s the last game of the season. We’ll let the future handle itself. They understand what we have to play for. We have to make sure their sights aren’t on two weeks, three weeks, four weeks from now.”

“You address it with the truth and realize that a kid has been bombarded with rumors and agenda masked as fact. You have to provide some semblance of truth. You have to understand that recruiting is a marathon and not a sprint. You try to provide them with the truth because what they are getting is not the truth. You just have to have constant communication, constant hard conversations with these recruits. You put them in touch with the players and the administration … the people that actually know the truth. Like anything in life, the truth will prevail.”

“No, because I know what the truth is … I don’t care about the public love. I’m not going to worry about a grown man’s tweet count. I’m not … maybe you guys do and that’s your job. I know what is said to me … eye-to-eye and man-to-man in offices and meetings. No, there is no stock placed in the tweet count of a 50-year-old man."