UT announced a new student entry process for the football game versus Oklahoma State. It comes after a video showed a chaotic scene entering DKR before the LSU game. 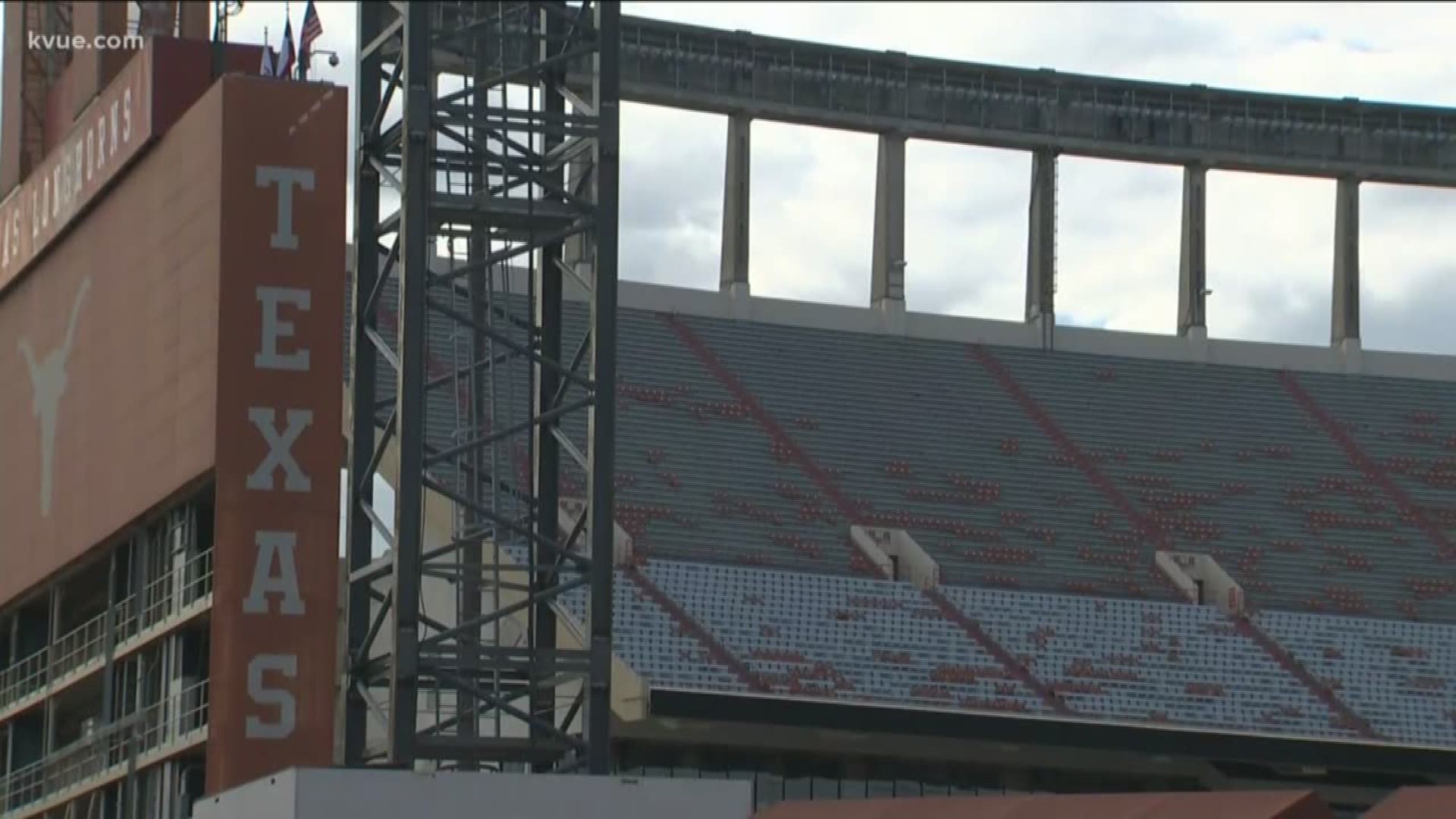 AUSTIN, Texas — In light of a chaotic scene at the last home game against LSU – where students said they were pushed, shoved and trampled while entering Darrell K. Royal - Texas Memorial Stadium – the University of Texas released a new student stadium entry process on Sept. 17.

In the memo posted on the university's athletics page, the protocol listed the instructions as follows:

• All students with The Big Ticket should enter at Gate 31 (east side of Darrell K Royal-Texas Memorial Stadium).

• Students may not enter any other stadium gates with their UT ID.

• Any bags must be checked before students enter the stadium gates. The clear bag policy is in effect.

• After entering the queue, students will be issued color-coded wristbands that correspond to the section where they may sit. You must have a wristband to enter the stadium gates. During the game, students may exit and return to their section if they have the proper wristband.

• Students will be allowed into seating sections at 3:30 p.m.

• Exits for restrooms/concessions in Sections 19-23, 25, and 29-32 will flow through the upper tunnels of those sections. You will be allowed to exit and return to your selected seat with the proper wristband.

• If you have trouble scanning your UT ID, please visit the student ticket windows at Gate 32. PLEASE NOTE THAT ONLY YOUR PHYSICAL ID WILL WORK. MOBILE/VIRTUAL IDs CANNOT BE SCANNED.

• Please visit @TexasFanFirst on Twitter for updates on gameday.

UT told KVUE that staff had been meeting and discussing new potential protocol changes for the past week to address the security issues experienced on game day against LSU.

"Our staff was overwhelmed," Drew Martin, UT's executive senior associate athletics director, said at a press conference Tuesday. "At that point, it was pretty clear we needed to figure out a much more orderly system. We needed to put up some physical barricades that actually routed students into those gates."

"Speaking of game day, we recognize we have some things to fix," Del Conte said. "Over the last week, I have had a chance to talk with many of our students, parents and folks across campus about the concerns regarding safety in the entrance to the stadium and crowding in our student sections at the LSU game. We are so grateful for all of the input we've received, and our fans' safety will always be paramount to us. We've had numerous very productive meetings and discussions with our staff and campus safety partners about how we can improve our processes on game days. We have come up with plans to address the issues and concerns and will be putting those in place starting with this Saturday's game. Emails and communications with details and information on the new protocols have gone out, and you should already have those so you can know our plan going forward. In addition, we have a new student entry process for the Oklahoma State game. Thank you so much for your patience and support."

The new process comes after security issues were questioned online when a Twitter video that Athletic Director Chris Del Conte responded to, depicted the chaotic scene at the check-in gates hours before kickoff against LSU.

KVUE spoke with the student who recorded the video, Miranda Larralde.

“I had no choice but to stay there, because I couldn't get out," said Larralde, a UT senior caught in the chaos as the stadium gates opened around 4:30 p.m. "But I also couldn't go forward."

Me and my friends tried to lock arms with each other," she added. "But then we lost each other ... we ended up reconvening later, but at the time it was really scary because I didn't know where they were."

"I think the barricades should help. I think last time since there was none, everyone didn't really have a concrete way of lining up for the game, so everyone just kinda crowded," she said. "I think this time the difference is that there's more crowd control in the sense of there being [a] queue line and them passing out wristbands, checking bags and things like that."

KVUE reached out to UT after the video was posted on Twitter and UT Vice President and Athletics Director Chris Del Conte told KVUE in a statement on Sept. 9:

“We are aware of the concerns about safety regarding the entrance into the stadium and crowding in our student sections at last Saturday’s big game. Our fans' safety is paramount to us, and we appreciate those who reached out and certainly hear your concerns. We do believe that the enormity of the game combined with the circumstances surrounding the south end zone construction project presented some new challenges that we had not previously faced. We have been meeting with all of our game management staff, as well as our campus safety and security partners and have been discussing potential solutions. We are working through plans and will address the issues and improve as we prepare for our next home game against Oklahoma State on Sept. 21.”