The Razorbacks controlled the line of scrimmage on both offense and defense, rushing for 333 yards and holding UT to 256 total yards. 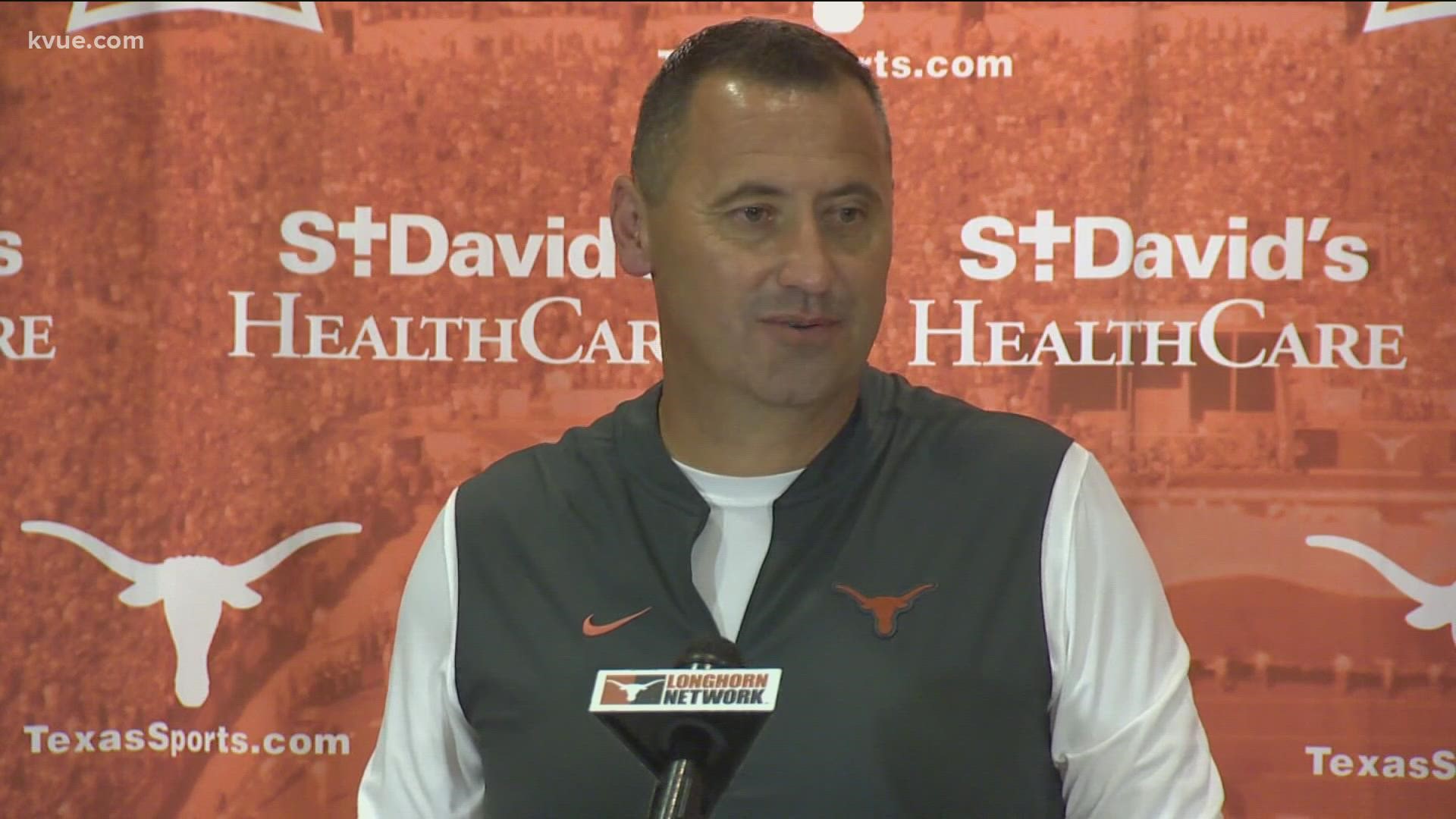 FAYETTEVILLE, Ark. — The Texas Longhorns football team followed up its first win in Coach Steve Sarkisian's tenure with its first loss in week two. UT's first SEC matchup since the school announced its intent to join the conference resulted in a 40-21 loss to old-time rival Arkansas Razorbacks.

The Longhorns did not have an answer for the Razorback rushing attack, which finished the game with 333 yards on 47 carries without having a single 100-yard rusher. Arkansas won the battle at the line of scrimmage on both offense and defense.

"There's always a concern when you go on the road in a hostile environment ... of keeping your temperament right so that you can go out and perform and execute. Clearly that didn't happen," Sarkisian said after the game.

UT could not catch a break early, including an Arkansas botched punt recovery that ended up not counting since the Longhorns player had a toenail out of bounds. The Longhorns would have had the ball inside the 5-yard line, but the Razorbacks dodged a bullet. The first half was a flurry of three-and-outs and its only drive across midfield ended with a missed 52-yard field goal from Cameron Dicker. Texas also had a punt blocked, which contributed to UT's 16-0 halftime deficit. Texas was 0-for-6 on third down in the first half.

Wow. Talk about a game of inches. Texas THIS close to a massive special teams fumble recovery. Toe out of bounds during recovery. Hogs get ball back. #HookEm pic.twitter.com/w82QABU81r

An interception by safety B.J. Foster in the third quarter led to a short field and a drive capped off with a one-yard touchdown run by Bijan Robinson. Any momentum Texas had was slaughtered, however, by a six-play, 81-yard touchdown drive by the Hogs.

After Hudson Card fumbled – which led to an Arkansas touchdown giving the Razorbacks a 33-7 lead – Casey Thompson entered the game at quarterback with 1:50 left in the third quarter. Thompson also replaced Card late in the third quarter in the season opener, but under much different circumstances. UT held a commanding lead against Louisiana in that game when Thompson entered the game.

1 / 5
AP
Arkansas running back Dominique Johnson (20) celebrates with Dalton Wagner (78) after scoring a touchdown against Texas during the first half of an NCAA college football game Saturday, Sept. 11, 2021, in Fayetteville, Ark. (AP Photo/Michael Woods)

UT's offense was held to 256 total yards. Robinson, who racked up 177 total yards in week one, only managed 81 against the Razorbacks front.

"They gave us a hard time early in the game. The brought a lot of pressure. They stacked the box most of the time," Robinson said. "I give that defense credit for understanding their assignment and executing it well and try to stop the run."

The Longhorns-Razorbacks matchup drew the first sellout crowd to Razorback Stadium since 2017. Saturday's game marked the first time Texas and Arkansas had faced each other in Fayetteville since 2004.

That sold out crowd stormed the field after the win over the Longhorns.

UT will return to Darrell K. Royal-Texas Memorial Stadium for its next game against the Rice Owls. Rice played Arkansas in its first game of the season. The Owls lost to the Razorbacks 38-17 after taking a 17-7 lead early in the third quarter. Texas dropped outside the AP Top 25 after the loss. Arkansas catapulted up to No. 20.

The Longhorns' second home game will come after UT Athletic Director Chris Del Conte apologized to fans in a newsletter about the DKR fan experience in the home opener. Del Conte said more than 500 part-time workers "no-showed" the game, which put a strain on game day operations.

It happened in Texas: The worst natural disaster in American history