After winning their past six games, the Texas Longhorns fell behind Oklahoma State early and the potential comeback fell short against the Cowboys. 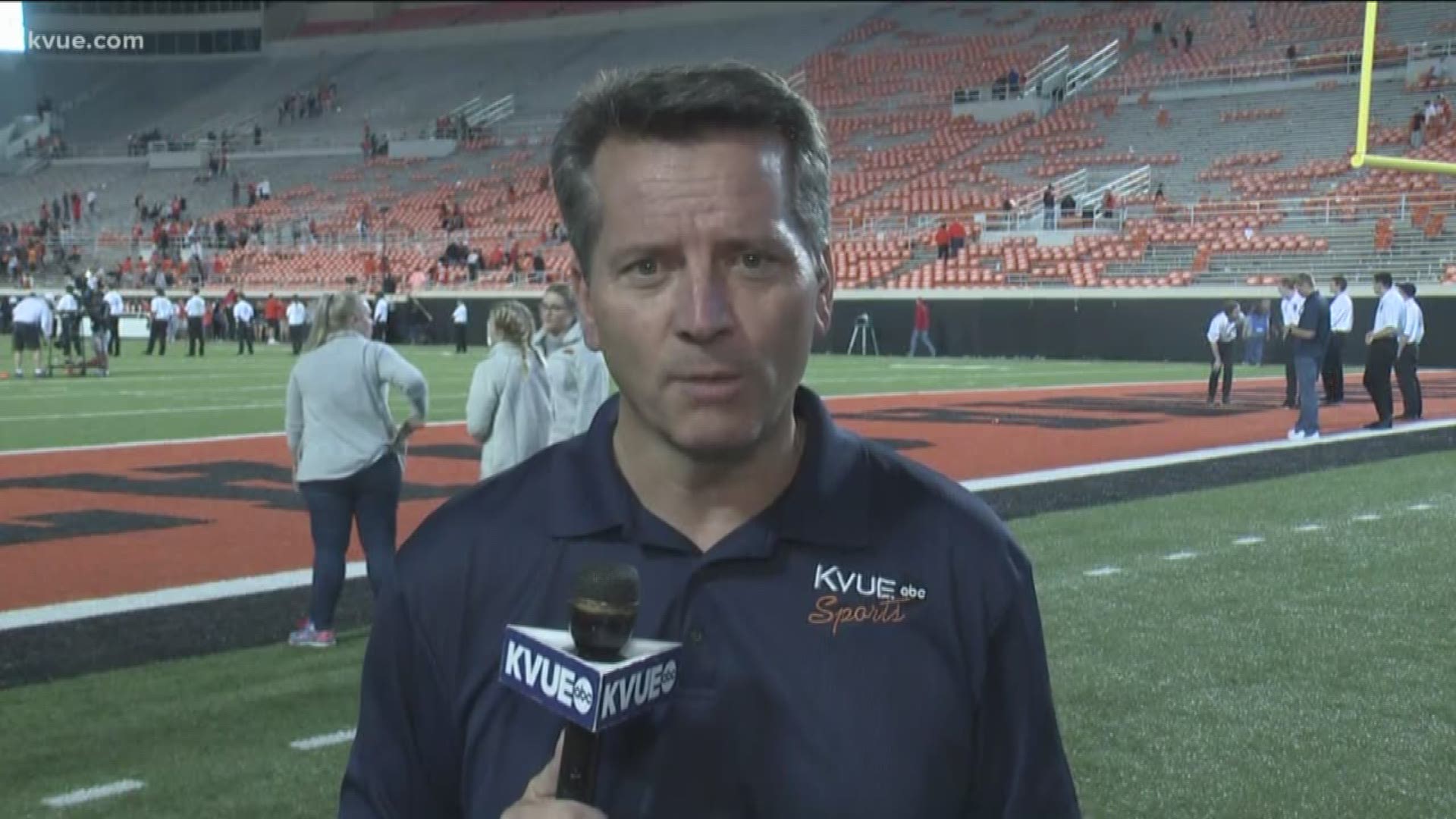 STILLWATER, Oklahoma — Texas was just that one play away from getting the ball back, down three points, with a chance to make a game-winning drive and complete a 17-point comeback.

Despite outscoring the Cowboys 21-7 in the second half, the Texas Longhorns could not stop Oklahoma State senior quarterback Taylor Cornelius on a crucial third down conversion with just over a minute to go, which essentially clinched the win for Oklahoma State.

DOWN GOES NO. 6 TEXAS! pic.twitter.com/YxIBO4PzBG

It goes without saying this was a heated matchup, which was prevalent when Texas was issued two penalties at the end of the game as Oklahoma State kneeled the clock out.

Tom Herman was heated at the end of the Texas-Oklahoma State game. pic.twitter.com/LJD4q3HjuM

The energy was felt from the opening kickoff all the way throughout the game.

At the start of the game, the Cowboys fed off of the atmosphere and had an electric start. In less than two minutes, Taylor Cornelius hooked up with sophomore wide receiver Tylan Wallace for a 40-yard touchdown reception, putting the Cowboys on the board first, 7-0.

But for Texas fans, all eyes were on sophomore quarterback Sam Ehlinger and how he would respond in his return from injury. He looked as healthy as ever. Ehlinger led his team on a scoring drive the very next possession, capping it off with his own five-yard rushing touchdown, which tied the game at seven apiece.

On the Cowboys’ second possession, instead of running the ball on a fourth and one, Cornelius kept the ball and hit tight end Jelani Woods in the end zone. There wasn’t a Longhorn in sight as the Cowboys were playing with such efficiency to start the game.

The solid first quarter for Oklahoma State didn’t stop there, either.

Despite the Cowboys’ offensive struggles prior to tonight’s game, they were the unit clicking on all cylinders. Oklahoma State scored on four of their first five possessions, extending the Cowboys' lead to 17 points.

That was when Texas seemed to wake up. On the following possession, Ehlinger orchestrated a quick drive - just four plays and 1:12 of clock - which ended in another rushing touchdown by the quarterback to cut the deficit to 10.

But while Texas woke up for a possession, it was Oklahoma State who brought the offensive fireworks. On another fourth down, Wallace hauled in a 36-yard touchdown catch in double coverage to put the Cowboys up 31-14 at halftime. The Longhorns only accounted for 169 offensive yards to Oklahoma State’s 378 by the break.

He timed his jump PERFECTLY 👌 pic.twitter.com/7930KgzzPl

A quiet second half gave way in the final two minutes of the third quarter when Texas seemed to find new life.

Ehlinger and freshman running back Keaontay Ingram connected for a 22-yard touchdown, bringing the score to 31-21 OSU. This provided a spark for the Longhorns offense.

Texas found the end zone on its next possession, as well, with senior tight end Andrew Beck on the receiving end of a jump ball pass from Ehlinger. Texas was quickly back in the game, only trailing by three. The defense also bowed up, forcing Oklahoma State to punt on back-to-back trips.

But Oklahoma State and Cornelius were not about to let down the homecoming crowd at T. Boone Pickens Stadium. The quarterback helped stretch the Cowboys' lead back to 10 after scoring a 10-yard rushing touchdown.

With just over five minutes to go, Ehlinger and the Longhorns made the game interesting again by narrowing the deficit to three following a 13-play, 75-yard touchdown drive with only 1:46 remaining in the game. Texas had all three of its timeouts and would have a shot at a game winning drive if they forced Oklahoma State to a three and out.

Herman and the Longhorns attempted an onside kick, which was recovered by the Cowboys.

The Texas defense stopped junior running back Justice Hill short on two carries and it came down to one final play with six yards to gain. On that third and six, Cornelius called his own number and picked up the first down, essentially ending the game. Oklahoma State kneeled out the clock and handed Texas its second overall loss of the season and first conference loss.

Cornelius shredded the Texas defense all day -- throwing for 321 yards and three touchdowns, and then rushing for two more. He had a special affinity for finding Wallace through the air, who hauled in 10 catches for 222 yards and two touchdowns.

The loss drops Texas to 6-2 overall and 4-1 in the Big 12. The Longhorns will return to Austin where they will play the West Virginia Mountaineers.