Confidence in Keaontay: Texas doubles down on run game despite rocky start to season

Despite two costly fumbles, the Texas coaching staff is sticking with Keaontay Ingram as a critical part of its three-man running back committee. 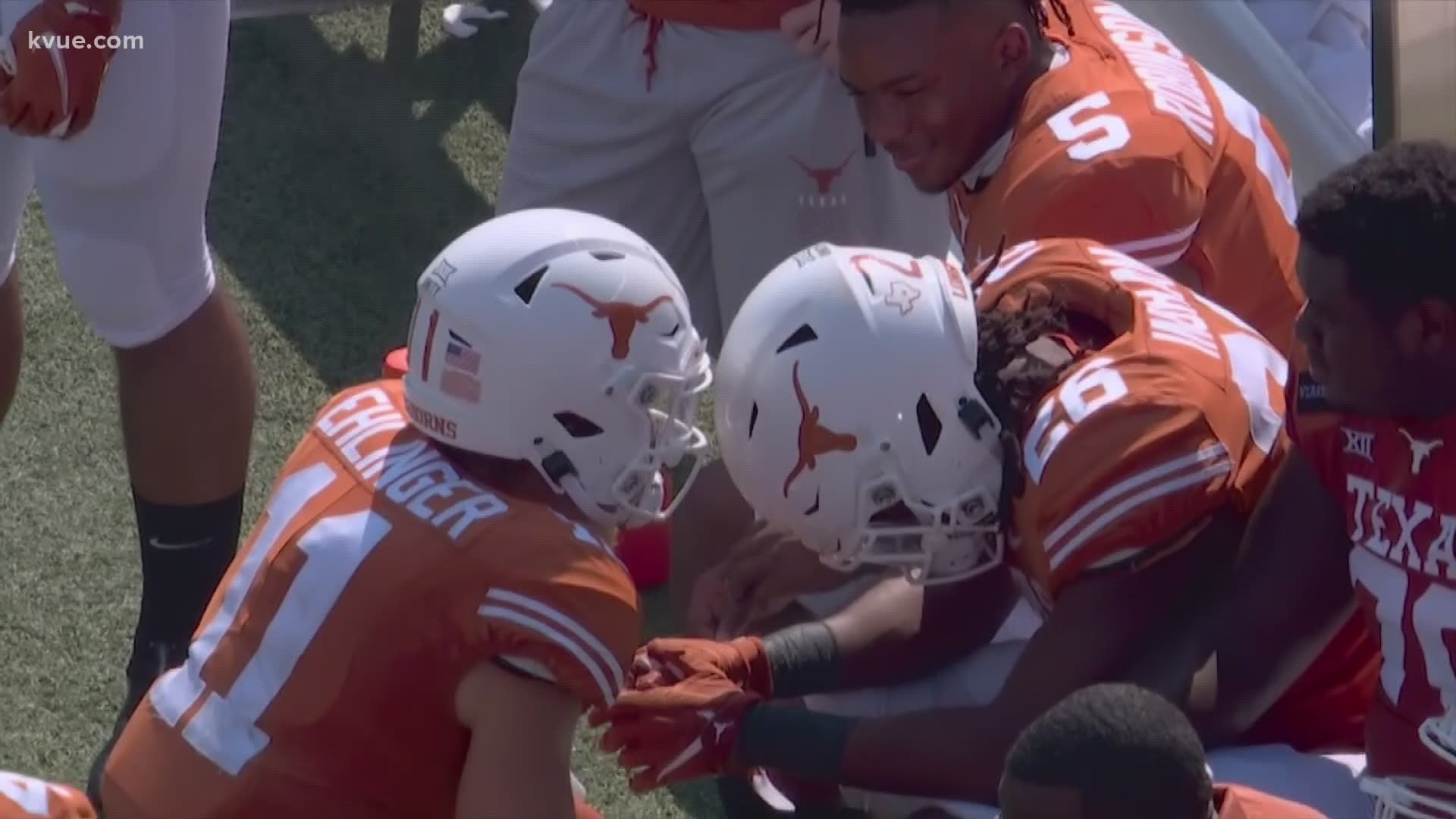 AUSTIN, Texas — After the first quarter in Saturday's game against Baylor, Texas quarterback Sam Ehlinger had just one completion.

He had only even attempted two passes. The run game, meanwhile, had been called upon nine times.

The Longhorns finished the game having called more than twice as many rush attempts as pass attempts, confirming the trend from the first quarter was actually a shift in strategy.

Head Coach Tom Herman attributed the game plan to an extra week of preparation – a week that was spent committing to running the football without the fear of getting anyone hurt.

"Is it a finished product? Not even close. Not even close," Herman said. "But we've made some significant strides to where we feel like we can continue to go back to the run game ... You get a couple two, three-yard runs in there and it's not the end of the world because you know if you just keep plowing away, keep chopping wood and eventually that log is going to split."

The 47 rush attempts for Texas were the second-most of the season. And while the success wasn't prolific – the Horns averaged under 3.5 yards per carry – the determination to stick with it allowed them to control the tempo of the game and win the time of possession battle.

Freshman Bijan Robinson got the first start of his Texas career and took his 12 carries for 56 yards.

Roschon Johnson, likely still recovering from an injury, was only asked to tote the rock once but remains a key piece of the three-man committee.

Herman called the effort from the run game and the running backs the best he's seen all season and said there's no plan to deviate from the three-headed monster approach any time soon.

"When you got a guy that is a bell cow, you're going to play him a bunch. When you've got a bunch of guys that have earned the right to play and nobody has separated themselves from one another in terms of production or ability level, I think the prudent thing to do is to keep everybody fresh," he said.

Ingram entered Saturday's contest perhaps the freshest of all.

He's showed signs of turning the page, however, with a touchdown catch at the end of regulation against Oklahoma and 16 fumble-less carries against Baylor.

On Tuesday, he met with reporters for the first time this season.

"I make mistakes just like any other back in the country. I don't feel like I lost any confidence. If I make mistakes, [I] tackle them throughout the week, throughout practice and just try to learn from them," he said.

It's been a rocky season for Texas running back Keaontay Ingram.

Today, he met with reporters for the first time this year, detailing his struggles with fumbles and how he got back into a headspace that's allowing him to turn the page. | @KVUE pic.twitter.com/2sP885P46M

"I'm just hard on myself," he continued. "I wouldn't call that being low. I just hold myself at a certain standard. I know the guys on the team, older guys especially, believe in me, and when I made those mistakes, I thought about those guys and took them into consideration. I needed to hit my preparation and get back to the fundamentals just a little bit harder."

The Longhorns are scheduled to play Oklahoma State in Stillwater on Saturday.

'If we experience a surge during Thanksgiving, it will not be over by Christmas' | Health officials warn public amid bleak COVID-19 projections

'This is not a heartwarming story. It's a tragedy.' | Texas migrant sponsor speaks out on family separation