Texas quarterback Sam Ehlinger said Tuesday that singing "The Eyes of Texas" allows him to feel connected to his late father. 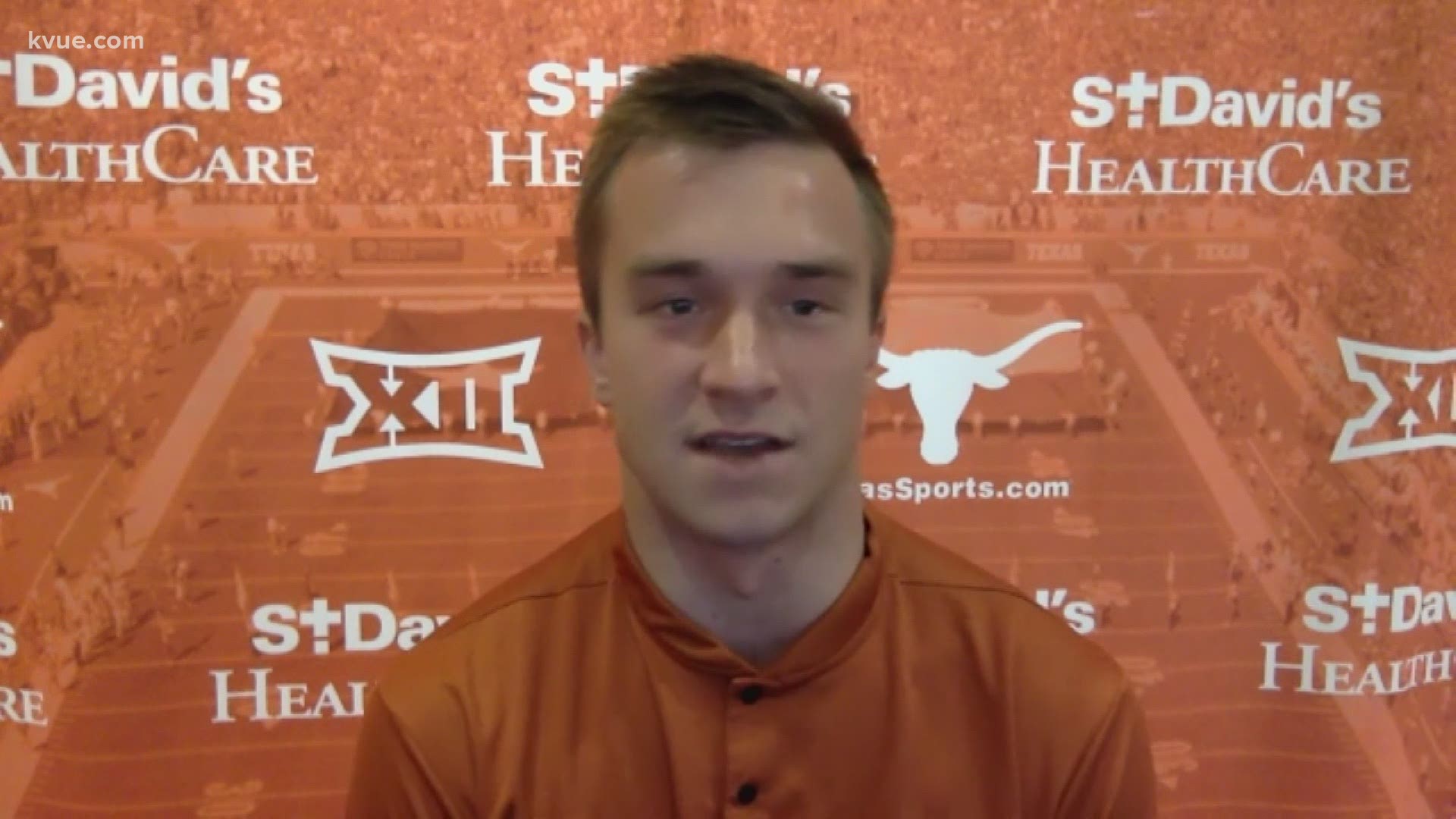 AUSTIN, Texas — The Texas football team returns to action this week, but most of the conversation surrounding the program has little to do with football.

Instead, it's the scene at the end of their most recent football game that has forced Athletic Director Chris del Conte, Head Coach Tom Herman and quarterback Sam Ehlinger to each address the subject at length.

After the Longhorns' dramatic quadruple overtime loss to Oklahoma in the Red River Showdown, Ehlinger was one of the few players who stayed on the field to sing "The Eyes of Texas."

The image garnered attention on social media and caused many fans to wonder if the team was divided.

On Tuesday, Ehlinger called the situation "a little bit of a misunderstanding."

"I know it's been blown up all over the place, but I stayed on the field longer than my teammates [because] I was talking to coaches and players [from Oklahoma] ... It just took a really long time and there were a lot of things going on," Ehlinger said. "I know that there were a few other guys out there on the field. I know when I turned around to walk back to the locker room, Ta'Quon Graham was there waiting for me. I don't know if he sang the song or not, but he didn't leave. I wasn't the only one on the field. I think there was a bit of confusion there."

Sam Ehlinger calls this picture of him standing alone for The Eyes of Texas “a little bit of a misunderstanding.”

Says he stayed on the field much longer than normal talking to Oklahoma coaches and players, and added that Ta’Quon Graham was there waiting for him in the tunnel. pic.twitter.com/B61mhEQLSA

Ehlinger's explanation comes a day after Herman insisted the team is unified and has worked through its handling of the postgame tradition.

"When I say unified, that doesn’t mean everybody agrees," Herman said. "What that means is that there has been a ton of open, honest and mature conversation in regards to a lot of topics. We’re a very divided country – very, very divided country. And our locker room is exactly the opposite.”

The conversation was reignited, in part, after Athletics Director Chris del Conte addressed the singing of the song in a newsletter to fans last week.

Del Conte said his expectation is that athletes stay on the field postgame to show appreciation to fans. He also reportedly met with the football team to discuss the subject in detail.

"We had a great team meeting," Herman said. "The result of that meeting, I think the general pulse of the team, is that we’re in as good a place as we’ve ever been right now as a team. I couldn’t be prouder of our team for staying unified throughout all of this, throughout the last few months."

On Tuesday, Ehlinger also delved into why singing the song is important to him.

"I grew up a Longhorn," he said. "I grew up singing 'The Eyes of Texas' win, lose or draw ... I feel a connection with my family and with my dad singing that song."

Ehlinger's father passed away in 2013 competing in a triathlon in San Francisco.

Ehlinger has stated previously that competing for Texas is his best way to honor his father's memory.

WATCH: Should UT force players to stay on the field for 'The Eyes of Texas'?

Petition to save Austin teacher's job garners more than 10,000 signatures