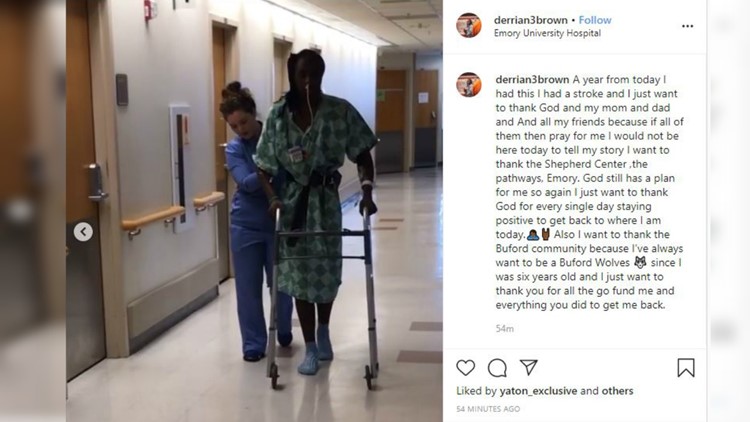 AUSTIN, Texas — University of Texas commit Derrian Brown has made significant progress in his road to recovery after suffering a stroke days before National Signing Day in early 2019.

Brown has underwent numerous surgeries, including the removal of a blood clot from his brain soon after he suffered the stroke.

Brown shared an Instagram video Friday which shows him walking with a walker at the Emory University Hospital during his recovery process.

In the caption of the Instagram video, Brown said:

Brown officially committed to Texas in September 2018 on Twitter.

At Big 12 media days before the 2019 season, head coach Tom Herman was asked about the status of Brown.

"Derrian is great," Herman said at Big 12 Media Days. "His rehab is going stupendous. He is going to enroll right before classes start [in the fall]. Obviously, he won't be a member of our 110-man roster during training camp, but once school starts, he will be on the team, going to class and continuing his rehab."

Herman also did not rule out any possibility of Brown returning to the field for the Longhorns in the future.

"I highly doubt it," Herman said at Big 12 Media Days of Brown's return in the 2019 season. "After [the 2019 season], there's a significant chance [for Brown to play football at Texas in the future]."

In the Instagram post Brown shared Friday, he referenced a GoFundMe page – one which was started to help his family with his medical expenses. The fundraiser was approved by the NCAA and has raised $74,000 of its $80,000 goal, to date.