Photographer Nick Wagner, along with the Georgia Bulldogs' mascot, was among those caught in the path of Bevo's charge at the Sugar Bowl. 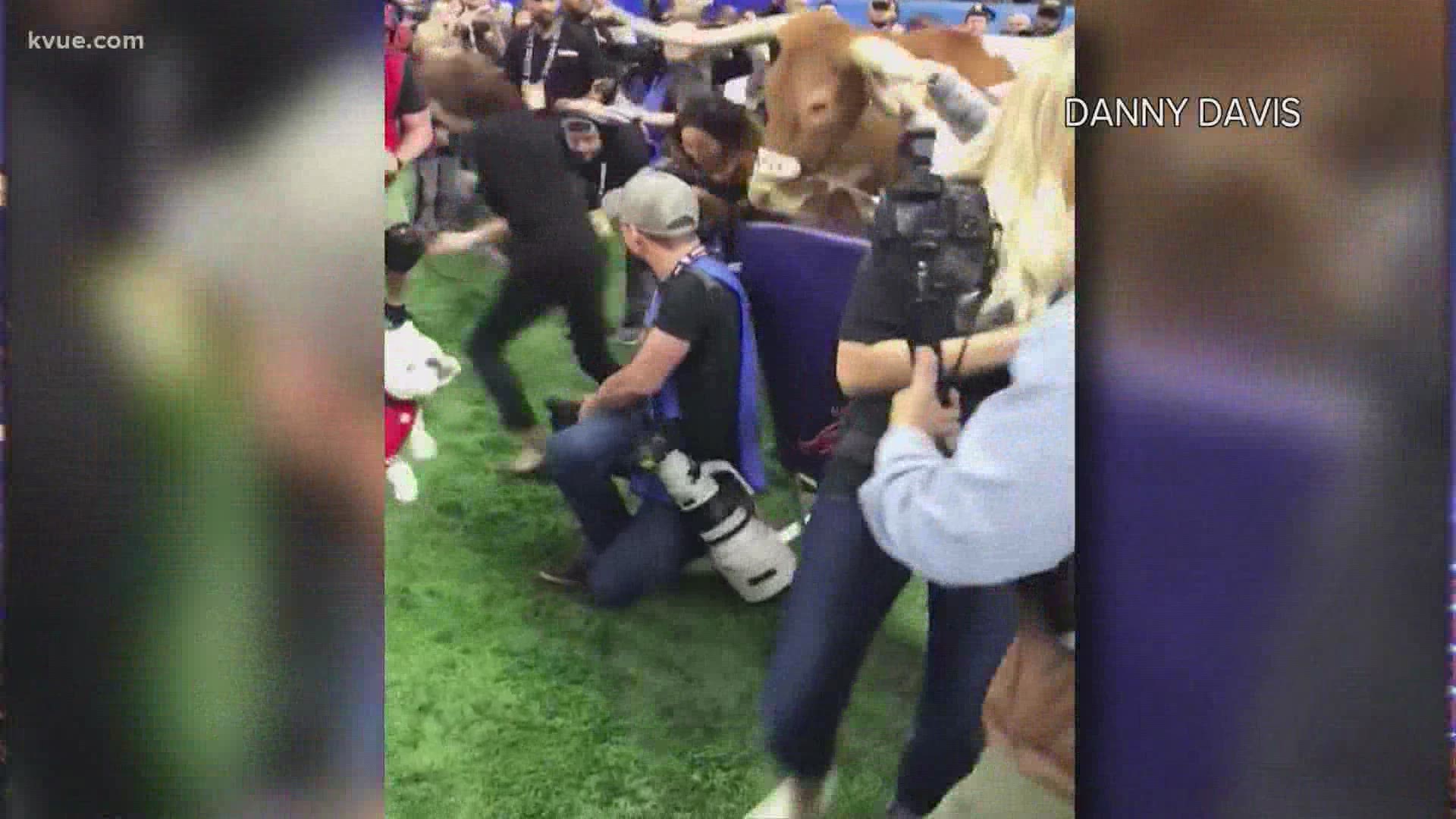 AUSTIN, Texas — It was a viral moment many Texas Longhorns fans remember: Bevo XV charging out of his holding pen at the 2019 Sugar Bowl.

Uga, the Georgia Bulldogs' mascot, was being escorted by his handlers near Bevo XV's pen on the sidelines for a photo op before kickoff when the steer surged out of the pen.

The moment was caught on cameras for a national audience.

A former Austin American-Statesman photographer who was also in Bevo's surge path has now filed a lawsuit against the owners and handlers of Bevo XV for negligence that caused "permanent injury," according to the Statesman.

The Statesman reported that according to the lawsuit, Nick Wagner was performing his duties as a photographer for the newspaper when he was taking photos of Uga X. Then, Bevo charged from his pen.

The lawsuit says Wagner "was on one knee in front of the portable railing which Bevo was behind." It goes on to say "Bevo XV rammed his longhorns twice into Plaintiff’s back causing permanent injury to Plaintiff’s neck and back."

KVUE spoke with Wagner back in January 2019 after the incident happened.

"All of a sudden, people start running, I hear some clamoring in the background, I turn around and I see Bevo's horns coming toward me," Wagner told KVUE. "I was like, 'All right, it's time to go.'"

Wagner told KVUE he had been shooting the Longhorns for two years, and he'd never had this close of an encounter with Bevo.

"He got me, I don't know with his horn or what, in the back, then he got me with his right horn," Wagner said. "The hook, I got hooked."

Wagner’s attorney, Jon Powell, told the Statesman in an interview Monday that Wagner has more than $24,000 in medical bills from therapy sessions. According to medical documents reviewed by the Statesman, Wagner suffered from "loss of motion" and "impairment" in two areas of his spine.

"There’s no doubt that you don’t want to have BEVO run into your back," Powell told the Statesman. "He was just trying to do his job as a photographer, and it’s up to the handlers to make sure he doesn’t get out of control. Luckily, he didn’t get mauled or anything like that, but he did suffer a tough injury."

Wagner shared a photo of his injury with KVUE back in 2019. According to the Statesman, Wagner thought he just had a deep bruise, but said the pain never subsided.

One day after the eyes of Texas – and the nation – saw the viral moment, PETA renewed its call to colleges to end the usage of live animal mascots.

"Steers, like all animals, are individuals with unique personalities," said Michelle Kretzer with PETA. "It’s quite possible that Bevo was simply scared by the noise, lights and chaos in the stadium and tried to flee from the confines of his makeshift pen. But that doesn’t change the fact that Uga or any of the humans standing nearby could easily have been trampled and killed."

KVUE's Terri Gruca spoke with the couple who raised Bevo back in the fall of 2018 at their ranch where they also train his handlers, the Silver Spurs.

"He's a live animal but he's pretty amazing. He's docile, always been relaxed when we've been around him," said Clayton Helbing, a Silver Spur.

Bevo's owners, Betty and John T. Baker, have owned the last three UT mascots. They said they teach Bevo's handlers how to keep him calm without using sedatives.

"They're interesting animals and they respond in kind. You treat them good, they treat you good," John T. Baker said. "There's never been one cc or one milliliter of any type of medication given to any sunrise steers since 1988."

KVUE's Emily Giangreco also followed Bevo and his owners through their game day routine in the fall of 2019.

Wagner told KVUE in 2019 that despite the incident, he had no hard feelings toward UT's mascot.

"I hope this doesn’t change anything about him whatsoever because he’s Bevo, he's a staple of Texas football games," Wagner said in 2019. "The crowd and the players alike really feed off of him. When he gets shown on the big screen and has the spotlight on him, the whole place gets rockin', DKR gets turned up and the players feed off of that, so it adds to the experience that is Texas football."

Wagner and Bevo ironically ran into each other again at a gas station in Baton Rouge while on the drive back to Austin from the Sugar Bowl.

"Happened upon the big guy at a gas station in Baton Rouge on the way home today," Wagner tweeted with a photo of him standing behind Bevo’s trailer. "No love taps from him this time, just a pleasant side eye."

Nearly a year and a half later, Wagner is seeking a jury trial with damages between $200,000 and $1 million. Wagner left the Statesman in May, the paper reported.