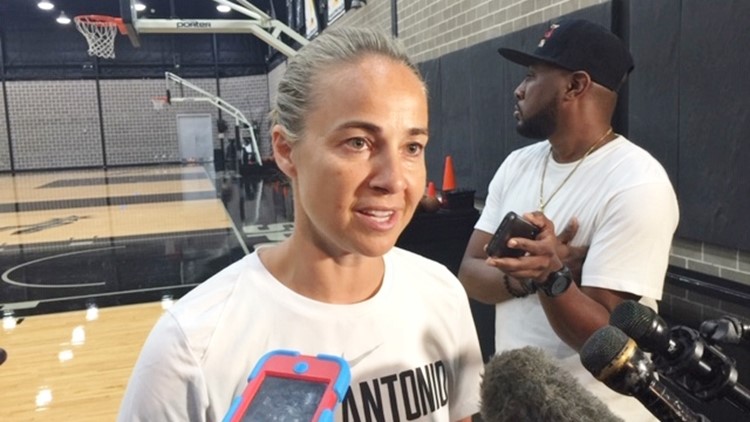 Photo by: David Flores / KENS5.com
Spurs assistant coach Becky Hammon, who has been on Gregg Popovich's staff for the past five seasons, will coach the Silver and Black in the Las Vegas Summer League next month in Las Vegas.

SAN ANTONIO — At least for the next few weeks, Becky Hammon won’t be the only female assistant coach working with the Spurs’ summer league team.

Two women, Edneisha Curry and Lorena Infantes Nunez, will be guest coaches for the Silver and Black at the Salt Lake City Summer League next week and the Las Vegas Summer League that follows.

Blake Ahearn, who coaches the Spurs’ G League affiliate in Austin, will coach the team in Salt Lake City and Hammon will take the reins of the squad in the Las Vegas league, which tips off July 5 and ends July 15.

Curry is an assistant coach with the University of Maine, the only female assistant coach in NCAA Division I.  A Spain native, Nunez has coached at the Latin American Academy in Mexico City, and also has been coach of the U17 Chilean Women’s National Team and the Chilean Wheelchair National Basketball Team.

Curry and Nunez were at Thursday’s workout of the Spurs’ summer league team, but were not available for interviews with the media.

Hammon made history in August 2014 when she was hired by Spurs coach Gregg Popovich, becoming the first woman to land a job in the NBA as a full-time, paid assistant coach.

It didn’t take Hammon long to prove she had the chops to coach NBA players. She made history again in July 2015 when she became the first female coach to serve as a head coach in the NBA Summer League, leading the Spurs to the Las Vegas title.

Speaking to the media after Thursday’s workout at the Spurs’ practice facility, Hammon reflected on the road she’s traveled as a trailblazer in the NBA and how happy she is to see other women get opportunities to coach in the league.

“I always say we’re all in this thing together,” Hammon said. “There are people who have to help you along and see the potential and not care about what bathroom you walk into.”

Six other women coaches have followed Hammon into the NBA, including University of California coach Lindsey Gottlieb, who was recently hired as an assistant coach by the Cleveland Cavaliers. And on Thursday, multiple sources reported that ex-WNBA and Olympic champion Kara Lawson is joining the Boston Celtics’ coaching staff.

Hammon, 42, talked about the power of inclusion and how it strengthens the whole. “It’s a whole other untapped resource,” she said, referring to the pool of women qualified to coach in the NBA. “A whole side of the population has not been tapped for their basketball knowledge.”

Who are these guys? Breaking down the rest of the Spurs’ summer league roster

The Spurs have been one of the model franchises in American pro sports for the past two decades because Popovich never has hesitated to think outside the proverbial box. That he went against convention by hiring Hammon should not surprise anybody familiar with Popovich.

“They’re the ones that opened the floodgates and took the mystique off it,” Hammon said. “I think a lot of guys had probably thought about it and never pulled the trigger. So there’s something to thinking about it, and something (else) to doing it. Everybody’s seeing, 'oh, it can work.’”

A year ago this week, Popovich promoted Hammon to fill the coaching position vacated by James Borrego, who left the Spurs to become head coach of the Charlotte Hornets. Hammon moved to the front of the Spurs’ bench during games, alongside Popovich and assistant coaches Ettore Messina and Ime Udoka.

With Messina and Udoka also having left the Spurs since the team lost in the first round of the playoffs this season, Hammon is probably up for another promotion.

“We’ll see,” Hammon said. “We haven’t had those conversations yet. So right now, my focus is on summer league. So, I imagine I’ll still be running scouting reports next year, just like last year.”

Asked if it took some arm twisting to get her to coach summer league again, Hammon smiled and said: “When Pop tells you that, there’s no twisting. I’m happy to do it. It’s always fun to get in with the guys and get to know them on a better level in the summertime when you can see a little bit more of their personality. It’s not so much stress and pressure (than) when the big guy (Popovich) is in the building. It’s always exciting for me, so I enjoy it.”