Derrick White and Dejounte Murray said that their bond off the court helps them win on it. DeMar DeRozan missed a few pressure free throws, but redeemed himself. 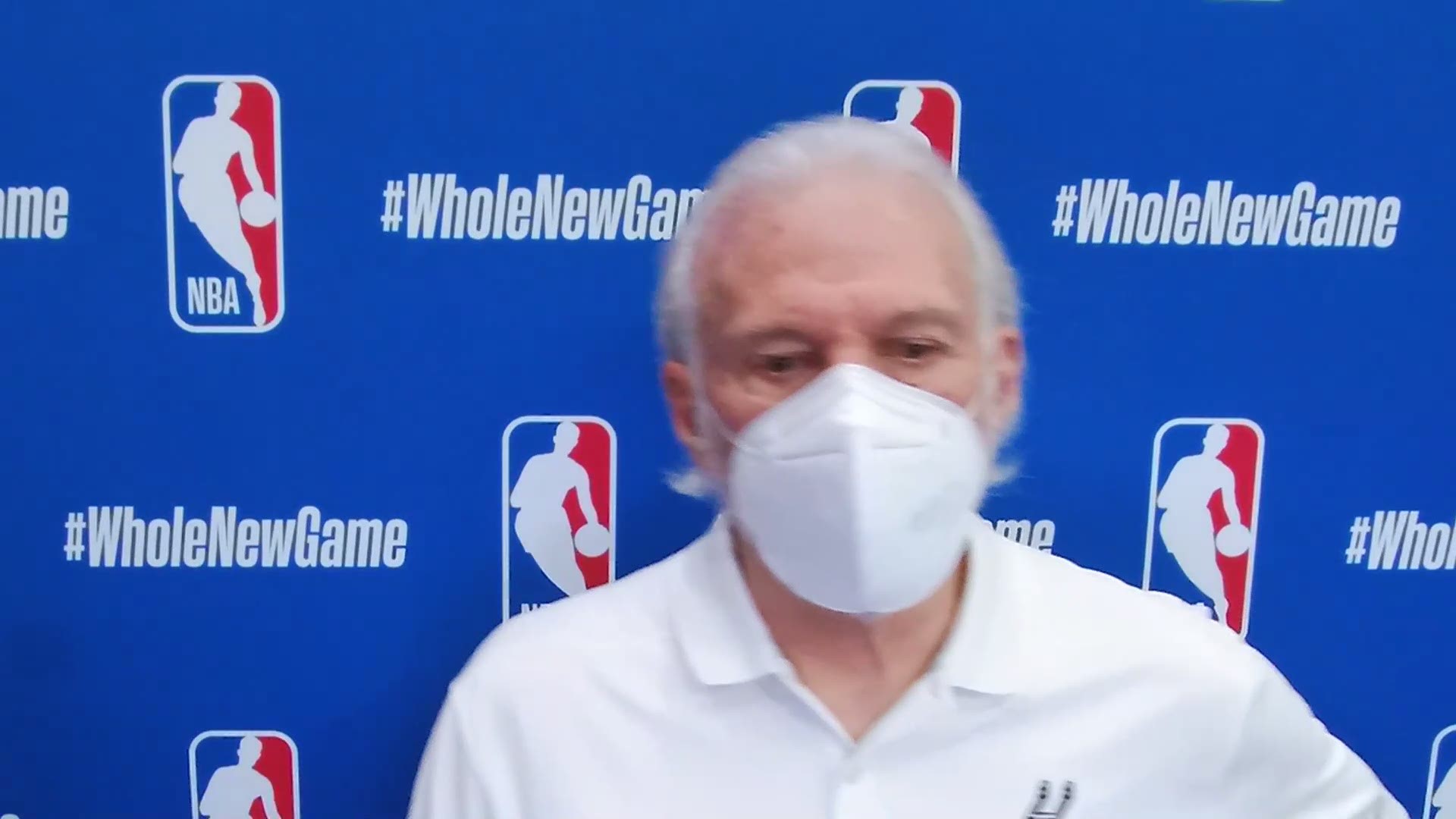 SAN ANTONIO — The Spurs won another crucial game in the Orlando bubble, propelling them into the coveted ninth seed for the time being.

Much like San Antonio's first meaningful contest in the bubble, their game against the Memphis Grizzlies was a back-and-forth affair, tight until late in the fourth quarter. Unlike Sacramento, Memphis threatened to take the game away on the final play.

With 7:33 left in the fourth quarter, the Spurs took an 11-point lead and the Grizzlies took a timeout. Then, Memphis executed their way out of that hole. It looked like they'd have a chance to take the lead on a free throw a few minutes later, but the made three was waved off as an off ball foul was called before the shot.

Rudy Gay had struggled to hit shots the entire game finishing just 3-15 from the floor, but drilled a clutch triple to put San Antonio up five. DeMar DeRozan hit a tough shot, and then he dished an assist to Dejounte Murray, who drilled a corner three.

The Spurs looked to be on the brink of busting the game open with three minutes left. Murray started a fast break with a chance to increase the lead to 10. He hit center Jakob Poeltl with a pass in the paint, but instead of a bucket, Poeltl picked up a charge and his sixth foul, sending him to the bench.

Immediately the Grizzlies started another run, with a few quick buckets for presumptive Rookie of the Year Ja Morant and a three ball for stretch big Jaren Jackson Jr.

In a one-point game with a minute left, DeRozan attacked the basket and finished an acrobatic layup attempt. Then he hit a tough jumper from the mid-range area that he loves so much.

The Grizzlies were forced to foul him down three with 13 seconds left, sending him to the line with a chance to effectively put the game away. DeRozan missed both free throws, however, and JJJ drilled a tightly contested corner three on the other end to tie the game. Unfortunately for the Grizzlies, Jackson fired with 10 seconds left on the clock.

DeRozan seemed nonplussed as Coach Gregg Popovich screamed to get the ball up the floor. DeRozan took his time, and it looked like he'd have no choice but to settle for a long two. With a second left on the clock, he pump faked and got Dillon Brooks to jump. The savvy vet jumped into him, and went back to the same spot where he missed just a few seconds before.

Jackson got a look at a three to win on the next possession, but missed badly, and San Antonio escaped with their second bubble win in a row. Their last game in March was a win, making this the third three-game winning streak for the Spurs all year.

There's still a long way to go, but there are a lot of positives for the Silver & Black to build on moving forward.

"You always like it better when you win," Popovich said after the game, noting that he didn't think his team was as sharp as they had been in their previous win over Sacramento and the scrimmage against Indiana. "We just kept playing, we went to the next play and that was the best part of the deal. We made it tough on ourselves in several different ways, but we kept playing, and that's what's important."

Popovich's young core and new starting lineup continued to show promise. Murray finished with 21 points, 10 rebounds, 3 assists and 2 steals. White kicked in 16 points, 7 dimes and 6 boards, while Lonnie Walker IV added 12. All three played solid defense as they most often do, and they combined to shoot 7-17 (41%) from deep.

Popovich said after the game that he was surprised by how quickly that trio has been able to develop chemistry.

"I actually am (surprised). They haven't played together that much, it's been off and on because of injuries and that sort of thing during the last couple years. They're having fun playing with each other they give us great pace, they move the basketball, they feel responsible to each other, it's a good mix."

Both White and Murray said after the game that the chemistry on the court stems from chemistry off the court.

"We like each other off the floor, and I think that's big," Murray said. "You've got to build chemistry off the floor before you build it on the floor. It's not even just me Derrick and Lonnie, the whole unit loves each other, likes each other, and tries to push each other, so it translates to on the court. You see we have fun, and we want the best for one another."

"It's been fun," White said. "We all like each other, we all get along off the court, that makes it good when we play well on the court. We want the best for each other, and we keep pushing each other to be as good as we can be."

One area where Pop has been pushing both of them is three point shooting.

“That’s the way of the league. You don’t shoot threes, you lose, that’s the bottom line. Derrick and Dejounte both know that," Popovich said before the game. "Derrick has really picked up on it quickly. I think he’s a little bit more confident in doing it right now than DJ, but he’s done a fine job of that. And of course, that’s just another threat on the floor. It spreads everything out a little bit more, one less defender to be in the lane and clog it and help. It’s very important.”

Murray did his part from long range, knocking down two of his four attempts. He's shown steady growth as a deep threat.

"Everybody knows how hard he works, how bad he wants to be really good in this league," White said. "He made big shots for us, big pull-ups, a big three in the corner to give us a little separation. He puts in the work, and it's nice to see it pay off here during the games."

"I'm never satisfied," Murray said. "I made shots, I missed shots, but at the end of the day I really want to be great. I love basketball that much, and I'm gonna continue to work at it."

That chip on his shoulder extends to San Antonio's playoff hopes as well.

"Obviously a lot of people have counted us out, not having a bunch of our guys, but at the end of the day we're all pros, and it's a next man up league," Murray said. "If you're showing up to lose a basketball game, you shouldn't be here."

"We're just gonna keep doing what we're doing," White said. "We came in with a lot of confidence in the group we had. It doesn't really change much for us, we've still got a lot of work to do to get to the playoffs."

Development will remain a focus, but these bubble Spurs still have something to prove, and their hopes of making the playoffs are much better after taking care of business in these first two winnable contests.

Their next opportunity will come Monday night on short rest against the Philadelphia 76ers.