San Antonio needs to win against a hungry Pelicans team. Coach Popovich spoke about rookie Zion Williamson and the Spurs' bubble run so far before the game. 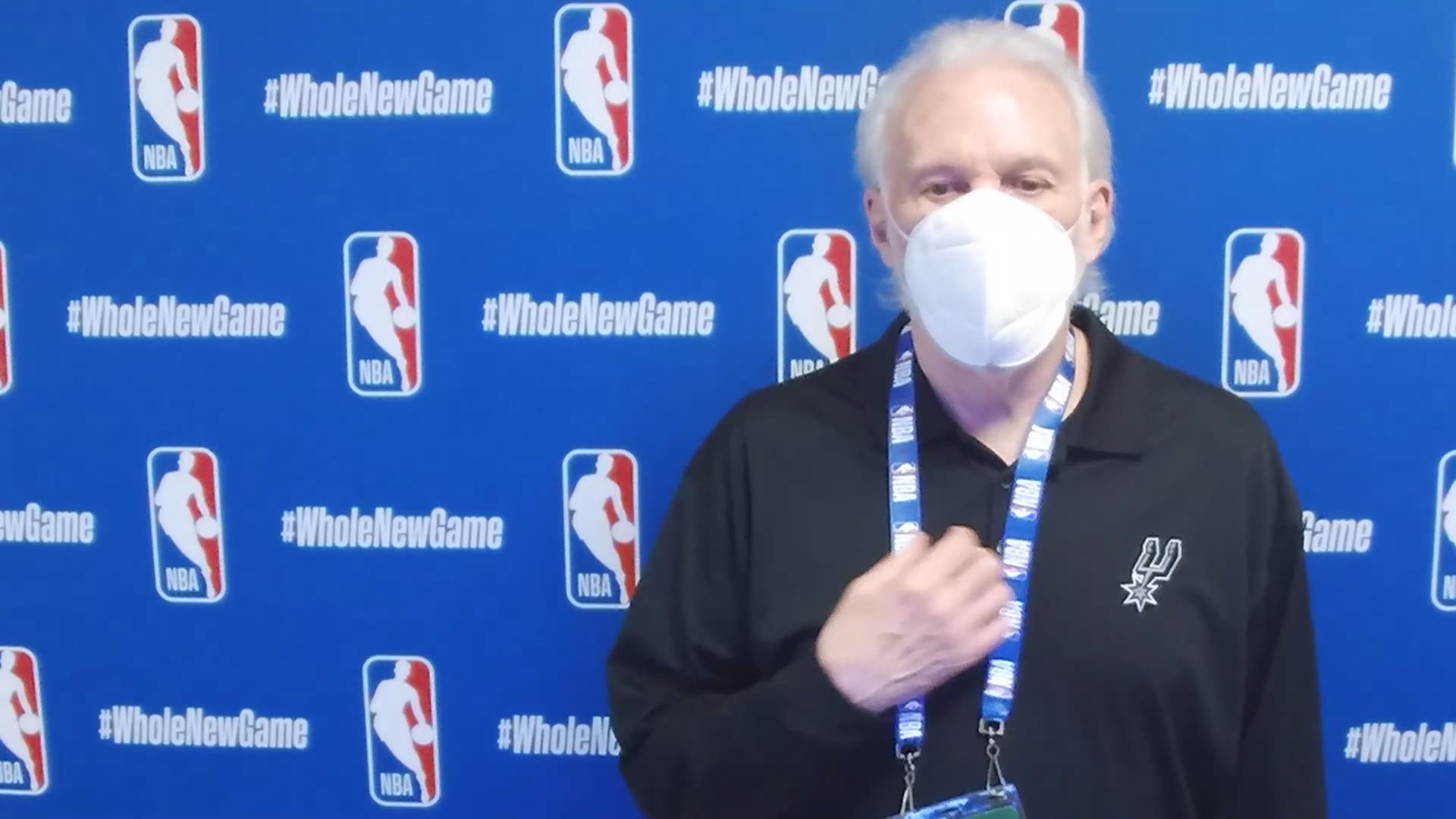 ORLANDO, Fla. — The Spurs dispatched a hungry Pelicans team in a crucial playoff-type game on Sunday afternoon, but their best player in the bubble, Derrick White, left the game with a knee bruise.

A 20-point Spurs lead dwindled to just four entering the fourth quarter, but 15 points from DeMar DeRozan in the final period sealed it for the Spurs. White's injury was described as a left knee contusion, and he walked out of the arena under his own power.

The story below will be updated after the game with postgame quotes, stats, highlights and analysis. Follow along on Twitter @bigfunpod for up to the minute coverage.

Coach Popovich hasn't exactly been up all night watching Zion tape, but said that he has seen what everyone else has seen from the explosive, humongous rookie:

"He's a hardworking, aggressive player, competes at the highest level. Very explosive, very quick, very strong, learning the game like any other young player, but very willing and quite a young prospect." 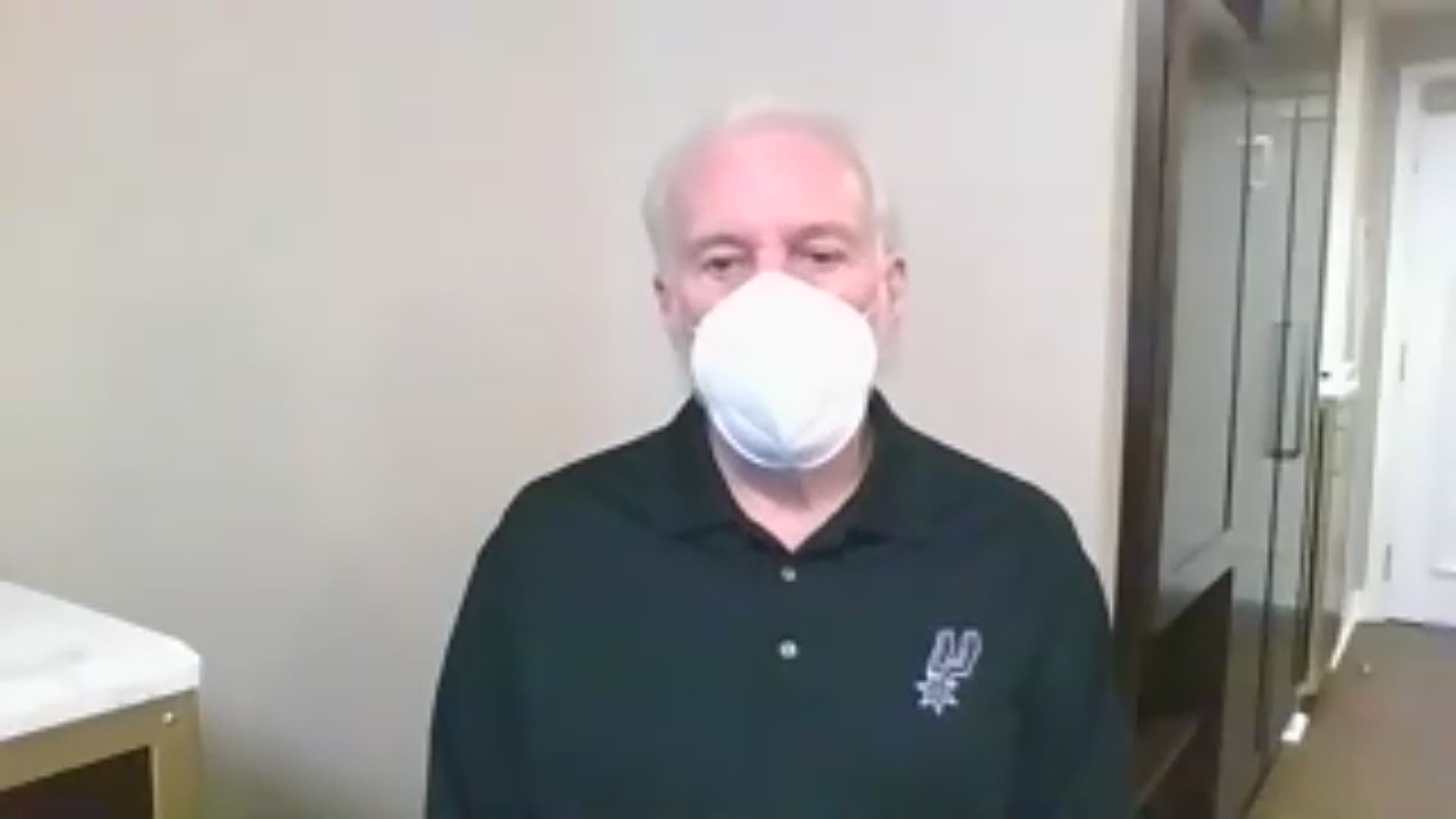 So who draws the assignment of guarding this matchup nightmare, listed at 6'6" and 285 pounds of fast twitch muscle and gumbo? DeMar DeRozan has been the de facto four for the Bubble Spurs starting lineup. At 6'7" he's taller than the other guards and closer to Zion's size, but he's a bucket getter who will likely struggle to hang with Zion without fouling.

The same goes for Rudy Gay, a veteran scorer who theoretically has the size to stymie the rocket-propelled bowling ball that is Zion. Still, his foot speed on defense and propensity to lose his man do not pair well against a nuclear-powered lob threat.

Derrick White is the team's best wing defender, and though he's undersized in the matchup, his ability to draw charges may come in handy against the hyper-aggressive Zion.

Other options include Keldon Johnson and his big body, and most of the Spurs fans watching this restart would love to see at least a few possessions of that rookie battle.

Zion may play minutes at the five, which would present a great test for Jakob Poeltl. The Spurs' seven footer has been a key for the Spurs, and his foot speed on the perimeter is impressive for a big man.

One look at the Western Conference standings will show you a very tight race for the eighth and ninth seed. The Spurs are currently two games back of the Grizzlies, who would have to lose their last three games while the Spurs win out for San Antonio to pass them. The Spurs are just a half game behind Portland, and could move into ninth over the Suns with a win and a Blazers loss.

The Spurs will likely need to win out to make the play in game, first against a hungry, desperate Pelicans team, then the Rockets and Jazz.

For Popovich, the emphasis was on player development coming in. The opportunity for the young core to play important minutes is a welcome one, and they seem up to the challenge.

"They're just playing," Popovich said. "They're just doing their job. Everybody that's here is either already assured that they're in the playoffs, or people like us are trying to get in, and we all compete and just try to do it, so your confidence level is always high and until you're not in it anymore."

We want the same thing from all of them, just like we have from day one while we've been here and we've gotten that. They've been wonderful. You know, we said from the beginning this was a developmental sort of situation for us. If we were fortunate enough to get to the playoffs, that's great, but the real win was to develop the young players, to mesh them with the older guys and prepare for next season.

"A big part of that was developing these young guys. So we've done that for the beginning. It's gone very well, so I'm very pleased."

The Spurs jumped all over New Orleans in the first three minutes. Derrick White drilled an elbow jumper out of the pick and roll, then confidently knocked down two wing threes to get the Spurs way out in front.

Jakob Poeltl started with tha task of guarding Zion, and did a beautiful job protecting the rim. Less than three minutes into the game, New Orleans took a timeout down 14-3. They executed out of it and San Antonio couldn't keep Zion off the offensive glass, so Popovich called a timeout after a quick 4-0 run.

The Pelicans responded to an 11-0 Spurs run with an 11-0 run of their own, as the Spurs missed 11 shots in a row before another timeout. With the game tied at 14, Dejounte, Derrick and Keldon combined for a strip that led to a jump ball, which the springy rookie Johnson won.

The Spurs got a bucket off a nice pass from Derrick and a stop on a charge taken by Dejounte, and began to right the ship. White finished a layup, then set Murray up for three, then dunked it.

Derrick and Dejounte playing together 🙌 pic.twitter.com/jLT7YaXcym

After free throws from Rudy Gay, San Antonio pushed the lead back to 11. At the end of the first San Antonio led 27-19 behind 12 points from Derrick White.

San Antonio extended the lead to 15 behind strong playmaking from the young guys. Lonnie Walker showed great patience and vision on a play where he pushed in transition, pulled it back, ran pick and roll, and found Keldon Johnson in the corner for three with a pretty sling over the top.

Keldon caught in the corner again, and drove past Zion forcing a foul and free throws. Johnson hit a layup off an assist from Belinelli, then Walker drove and kicked again to find Marco in the corner for three as the Spurs pushed the lead to 43-26.

Lonnie with the setup, Keldon with the finish pic.twitter.com/fiaKkWBlJs

All the while, Jakob Poeltl played lockdown defense on Zion Williamson, who finished the half with 7 points and 5 rebounds on 3-9 shooting.

San Antonio pushed the lead to 20, but took a timeout after New Orleans cut it to 15. By the end of the half, the Spurs led 62-45. Derrick White scored 16 points in the period, and San Antonio outscored New Orleans 14-2 in transition, taking advantage of 11 Pelicans turnovers.

Derrick White seemed to bang knees with a Pelicans player at the end of the first half. He came out to start the second half, but went down grabbing his knee after he drove and attempted a layup.

Zion began to heat up for New Orleans, scoring eight-straight points for the Pelicans. with his trademarked energy and physicality.

DeMar DeRozan, frustrated about a no-call, hammer fisted the ball and picked up a technical foul. After the free throws, the Pelicans trailed by just 11. They cut it to 10 as the Spurs announced that Derrick would miss the remainder of the game while being evaluated for a left knee contusion.

The Spurs scored just 19 points in a disastrous quarter, and saw their lead slip to 81-77 at the end of the period.

Rudy Gay doubled the Spurs' lead with a four-point play to start the fourth quarter. He ran pick and roll, and when Zion went under the screen, Rudy pulled up for three through a foul.

How to double a four-point lead, by Rudy Gay:pic.twitter.com/wmsUeKDevM

On the next play, Poeltl picked up his fifth foul as Zion twisted his ankle stepping on his foot.Lonnie Walker drilled a confident looking three, and the Spurs pushed it to 9.

A few plays later, Rudy Gay put it on the deck, drove baseline, and yammed it home to give himself 17 points and give the Spurs an 11-point lead with 8:38 to play.

Rudy Gay found a time machine during the hiatus 👀pic.twitter.com/WQDMiJkzks

San Antonio continued to lead thanks to big shots down the stretch by DeMar DeRozan, but the Pelicans cut the lead to 3 with two and a half minutes to play. San Antonio strung together a few stops and DeMar kept scoring, pushing the lead to 111-102 with just over a minute left.

14 in the fourth for DeMar

Rudy Gay had a tremendous second half on both ends, hitting big shots and playing excellent interior defense.

LIVE POSTGAME: The Spurs won 122-113, but lost Derrick White to a knee injury

Let’s talk about that crucial win, and the Spurs’ outlook in the playoff race https://t.co/HAiQeHOvUz

After the game, Coach Popovich spoke about the development of his young core and the leadership of his veterans in this decisive, critical win.

"We've got a lot of young guys out there, trying to learn how to be more consistent and just be solid in all those situations," Pop said after the game. We're not there yet, but we've made a lot of progress."

DeMar DeRozan and Rudy Gay continued their hot streaks in the bubble, combining for 46 points in the win. 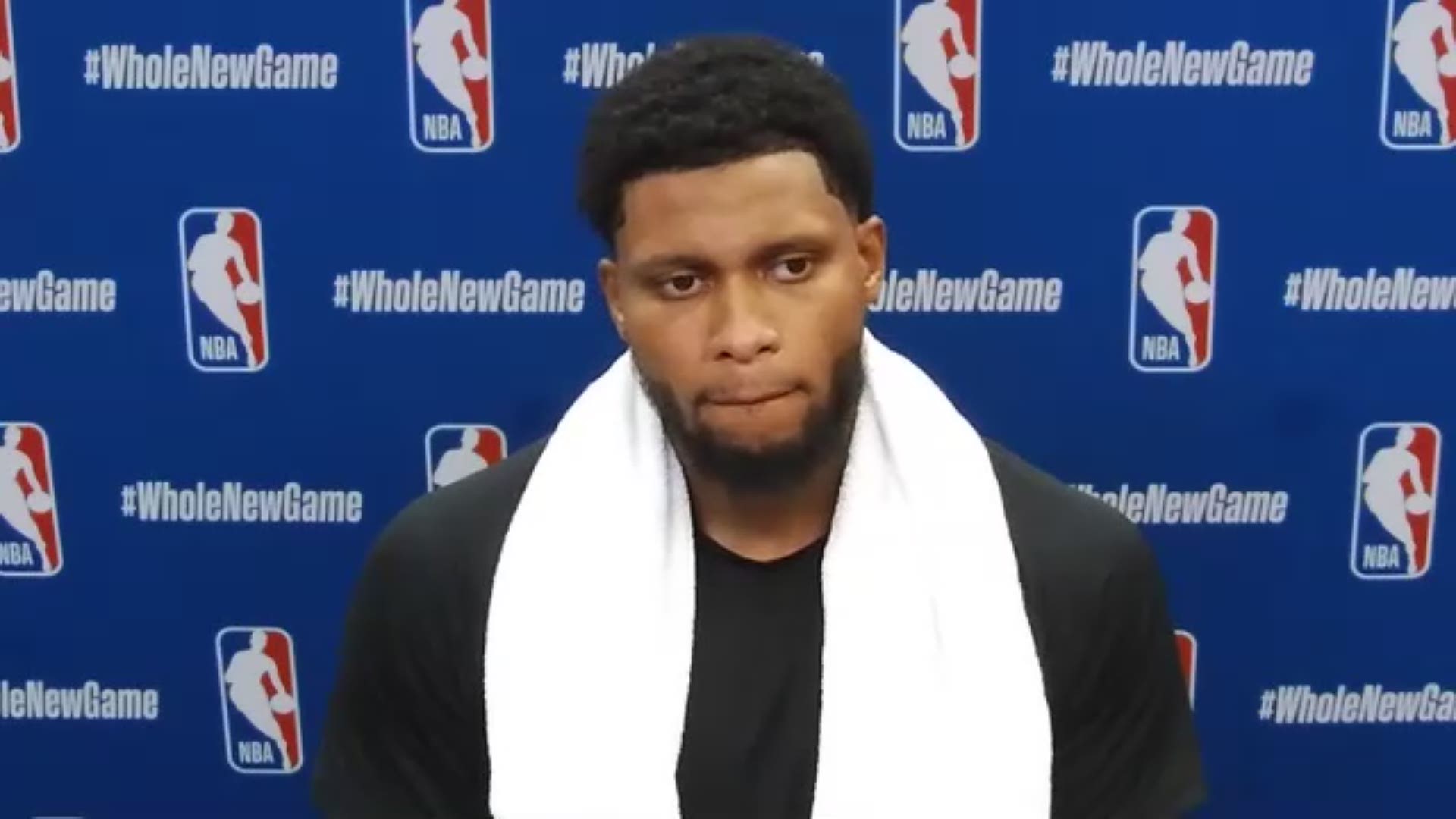 "They've both been playing really well here and mentoring the young guys," Popovich said. "When Derek went down, that's about one third of our driving capability. It takes a lot away, so the ball stuck a lot more in the second half without Derek, that's for sure. They hung in pretty good when we took a pretty good blow, so I was proud of them."

If the Blazers lose to the Sixers on Sunday night, San Antonio will move into ninth. After the game, Popovich made it clear that although he's focused on developing players, he can't think of a better way to develop his young core than by having them compete in a historic, high stakes playoff play in series.

"I think it would be huge," Popovich said. "They spent, what is this, the fifth week, as have the other teams. And if we're able to be in that ninth spot, that's quite a victory. It says a lot about how this young group has come together with three of the starters out. I'm already thrilled, the way they played, but that would be really fantastic if we could get there."