Fans in the left field bleachers insulted his family and taunted the Astros starting pitcher with chants about his social anxiety disorder. 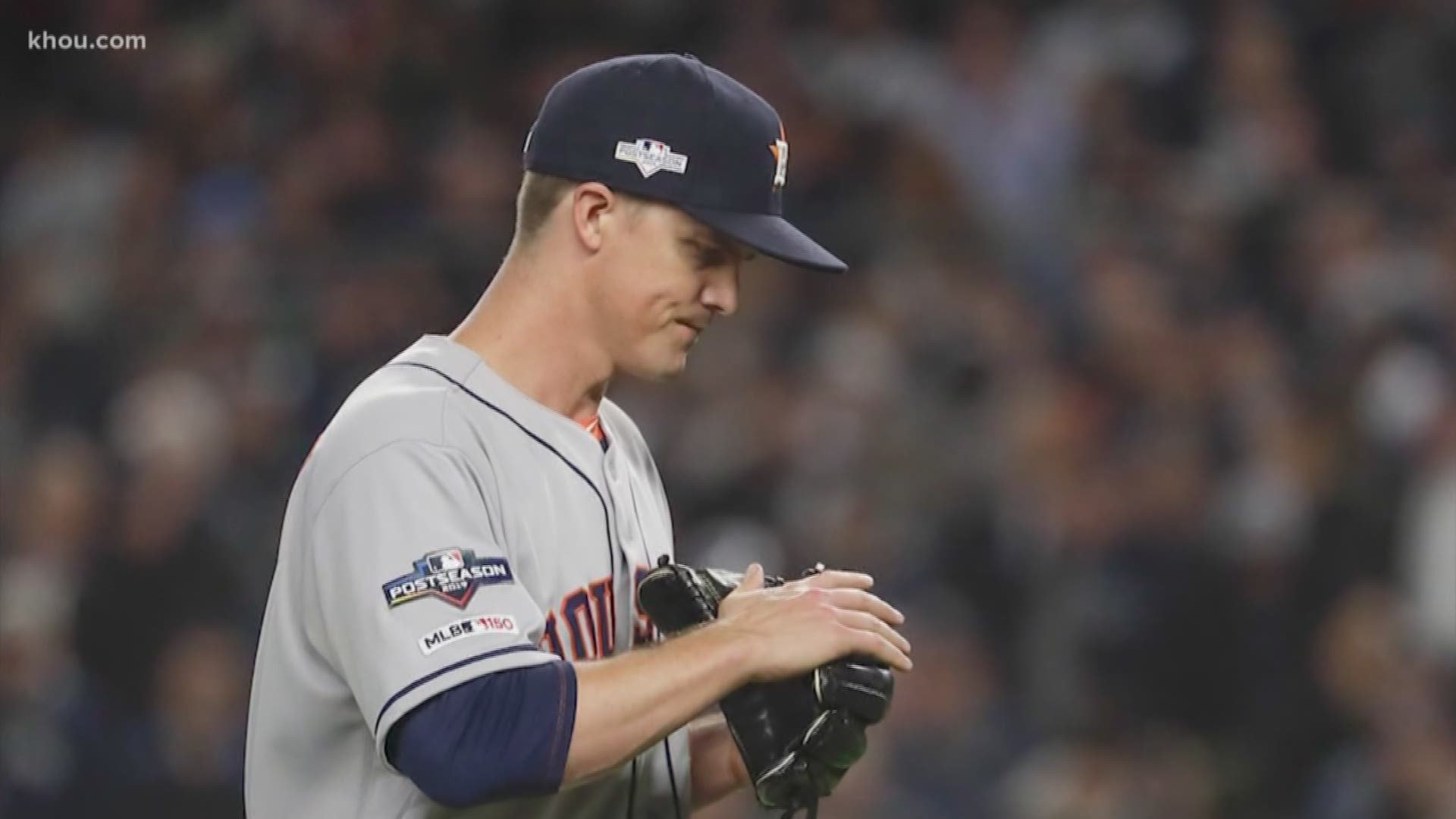 NEW YORK (AP) — Sounds as though Zack Greinke got an earful at Yankee Stadium while warming up in the bullpen.

By the time the ninth inning rolled around, most of those fans were long gone.

Awfully satisfying for the Houston Astros.

"They emptied out pretty quick toward the end. I guess there wasn't that much to say," right fielder Josh Reddick said.

Greinke kept his cool after a rocky start Thursday night and the Astros romped to an 8-3 victory over the New York Yankees for a 3-1 lead in the best-of-seven AL Championship Series.

A report by NJ Advance Media detailed some of the jeering directed at Greinke as he got loose before the game. Fans in the left field bleachers insulted his family and taunted the Astros starting pitcher with chants about his social anxiety disorder. At least one was ejected as police officers kept a watchful eye close by, the outlet indicated.

"I didn't hear anything," Greinke said softly in the Houston clubhouse after allowing one run in 4 1/3 innings.

The revved-up Bronx crowd also chanted "Donald! Donald!" — which is Greinke's given first name — while he was in the bullpen and on the mound.

"I don't know if low-class is the right word, but they are hectic," he explained. "I think winning three straight at their home park is going to make a bigger statement than that."

Greinke walked four — three in the first inning for the first time since April 2007 — and quickly fell behind 1-0. But the 35-year-old right-hander pitched out of an early bases-loaded jam and then settled in. He retired nine in a row before DJ LeMahieu's one-out single in the fifth.

"He really has a very slow heartbeat," Reddick said. "He always seems like he has a calm frame of mind out there."

Before the game, Astros manager AJ Hinch said he would remove his team from the field if fans again threw objects at Houston players.

Reddick said fans tossed water bottles, baseballs and other objects at him during Game 3 at Yankee Stadium on Tuesday.

RELATED: ALCS SCHEDULE: When to watch the Astros and Yankees after Game 4 delay

"I will pull the team off the field if we get in that situation again where bottles are being thrown and balls are being thrown and it becomes unruly," Hinch said prior to Game 4. "There's other ways to support your home team, and this place does as good a job as anybody to trying to police that while also trying to create an environment that's all pro-Yankees. It would be a very ugly scene for baseball, a very ugly scene for the Yankees, if one of our guys was hit by something from the upper deck. Something tragic could happen and nobody wants that."

A warning message was shown on large center-field video board before the game: "Please be advised that it is illegal to throw any substance or object in the stadium. Violators face ejection and a permanent ban from Yankee Stadium, as well as criminal and civil penalties."

An audio recording from Yankees manager Aaron Boone imploring fans to "please don't throw objects onto the field" was played after the second inning.

Reddick said Yankee Stadium fans "find anything they can on you" but described those in the outfield Thursday as "pretty laid back, actually."

"I didn't get anything thrown at me tonight, so that was nice," he said with a smile.

"To come in here and take the first two from a team like this in their home park, this is one of the hardest places to play on the road. The atmosphere is very intense and very unique, so it makes a big statement when we come in here and do that," Reddick added.

Houston third baseman Alex Bregman said he loves the "awesome" atmosphere. He said playing at Yankee Stadium in the playoffs is like being in the middle of a boxing match with "madness all around you."

But he said it's the same back home at Minute Maid Park during the postseason.

Yankees fans cheered when Houston leadoff man George Springer, who hit a three-run homer earlier, was brushed back by reliever Tommy Kahnle in the seventh, and again when Robinson Chirinos was hit by a 91 mph cutter from CC Sabathia in the eighth.

With the seats mostly empty as the Astros tacked on runs in the last two innings against the sloppy Yankees, one fan yelled "wake up!" A Bronx cheer went up when shortstop Didi Gregorius gloved an easy popup in the ninth.

New York fans erupted after a replay review changed Edwin Encarnación's infield hit leading off the eighth to a groundout in Game 3. Houston went on to win 4-1.

"I went out on the field the other day, I wanted the umpires to know that it was becoming a dangerous situation," Hinch said Thursday. "Our guys have reported both in the bullpen and in the outfield, you could see the stuff thrown on the field. There's no place for that. Both teams will agree. And it's really hard to stop fans from doing that. But it's also very dangerous. MLB is aware. We're aware."

Reddick homered off Luis Severino in the second inning for a 2-0 lead. Fans directed insults at him when he went to right.

"You throw a baseball hard enough and hit somebody in the head when they're not looking, it could do some damage to the player, so it's definitely disrespectful and at the same time very unsafe," Reddick said after the game.

He also said he was subject to verbal abuse.

"It's a matter of all kinds of different things here, but you're used to that for nine innings. Pretty standard," Reddick said. "They're all yelling at the same time, so it all kind of mumbles together."

Reddick said Thursday night that he spoke with Major League Baseball security about the situation.

"They said they were going to up the security and the police presence in the outfield and the bullpen," he said. "I didn't really get a good look at it, but the people that I did talk to I had very credible conversations with and I do feel they did all the right necessary moves to take care of things. And we obviously didn't see anything thrown on the field tonight, so that's obviously a positive sign."