With his dad in the hospital battling stage 4 cancer, Krys Jakubowski is playing harder than ever to honor his dad's favorite sport. 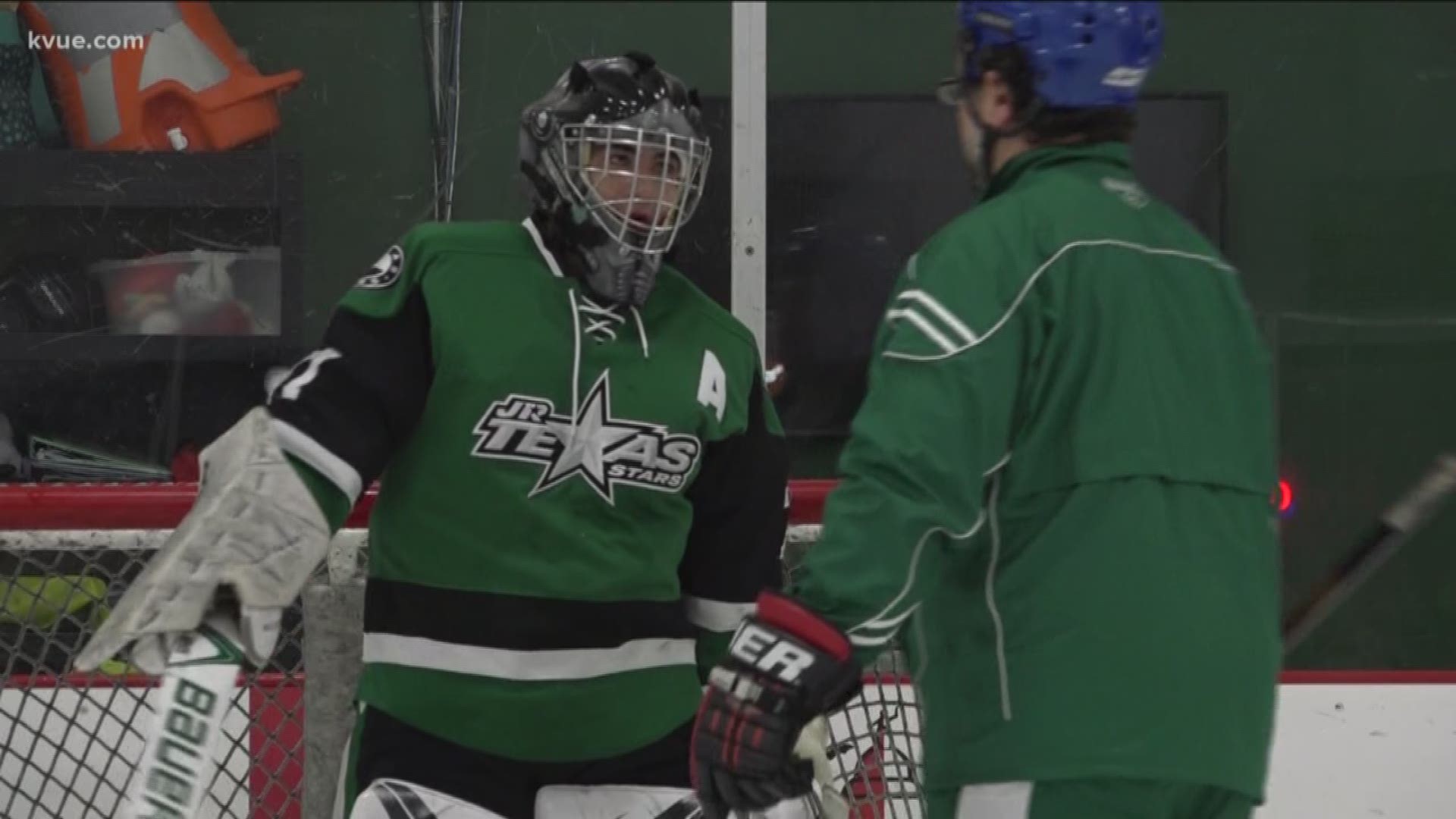 AUSTIN, Texas — The best athletes for any sport usually find the motivation to be great from within, but also from other places.

In Austin, a 15-year old athlete is dealing with something tragic but is handling it by honoring someone special.

Krys Jakubowski is the hockey goaltender for the Texas Junior Stars. Now a teenager, Krys said he wanted to be on the ice from an early age.

"I got into hockey when I was around seven or eight years old," Krys said. "You get a rush from it."

Krys' love for the game came as no surprise to his parents since hockey was on the TV all the time while he grew up. His mom, Maria Jakubowski, said he got it mainly from his dad.

"Everything started with my husband," Maria said. "He never played, but we were always watching every hockey game."

Krys started playing really well early on. Texas Junior Stars Head Coach Ryan Raya said he is an easy player to coach thanks to his attitude.

Ryan Hammersmith plays center for the Texas Junior Stars and has known Krys for a while. He echoes the same type of praise for Krys that Coach Raya gives him.

"Whenever we have him in net, we always know he gives us a chance to win," Hammersmith said. "He's the hardest worker on our team. It's been that way since we were kids. He is always making the big save to keep us in games and win games for us when we need it most. We're so lucky to have him."

All aboard the Stars bandwagon: A hockey guide for the casual fan

Krys points to one person when it comes to the hard-working attitude he brings with him every time he steps on the ice.

"My dad has been a big motivation in my life," Krys said. "When we had 6 a.m. practices, he'd be there to wake me up and drive me to practice. He never missed a game."

Just before Christmas 2018, everything changed for the Jakubowski family. Krys' dad was diagnosed with stage 4 lung cancer that has now spread to his brain and his chest. He is in the hospital and can no longer go to Krys' practices or games.

While tragedy like this impacts everyone differently, it didn't make Krys turn away from hockey. Instead, it made him want to play even harder on the ice for his dad.

"It was pushing me on," Krys said. "He has just always been there for me."

Even though he couldn't make it to the games, Krys' dad watched the games through FaceTime. Krys' mom would call him on an iPad and point it towards the rink, something that Krys' is always able to see when he looks up into the stands.

"It's a way for him to be here even though he can't be," Krys said. "Deep down in my heart, I know he's already cheering me on. Seeing him just get to watch, it's a good feeling."

If you want proof that Krys' game only got better, the 15-year-old goaltender has been invited to the 2019 U.S.A. Hockey National Development Camp in Amherst, New York – making him the first-ever player from Austin to do so.

"Coaching a kid that wants to come out and work that hard is a true joy," Coach Raya said. "You don't find that many kids like that."

A family friend has created a GoFundMe account to help with expenses for the Jakubowski family in getting Krys up to New York this upcoming July.