The Jarrell Cougars and Burnet Bulldogs kick off the 2020 season as KVUE's first Game of the Week! 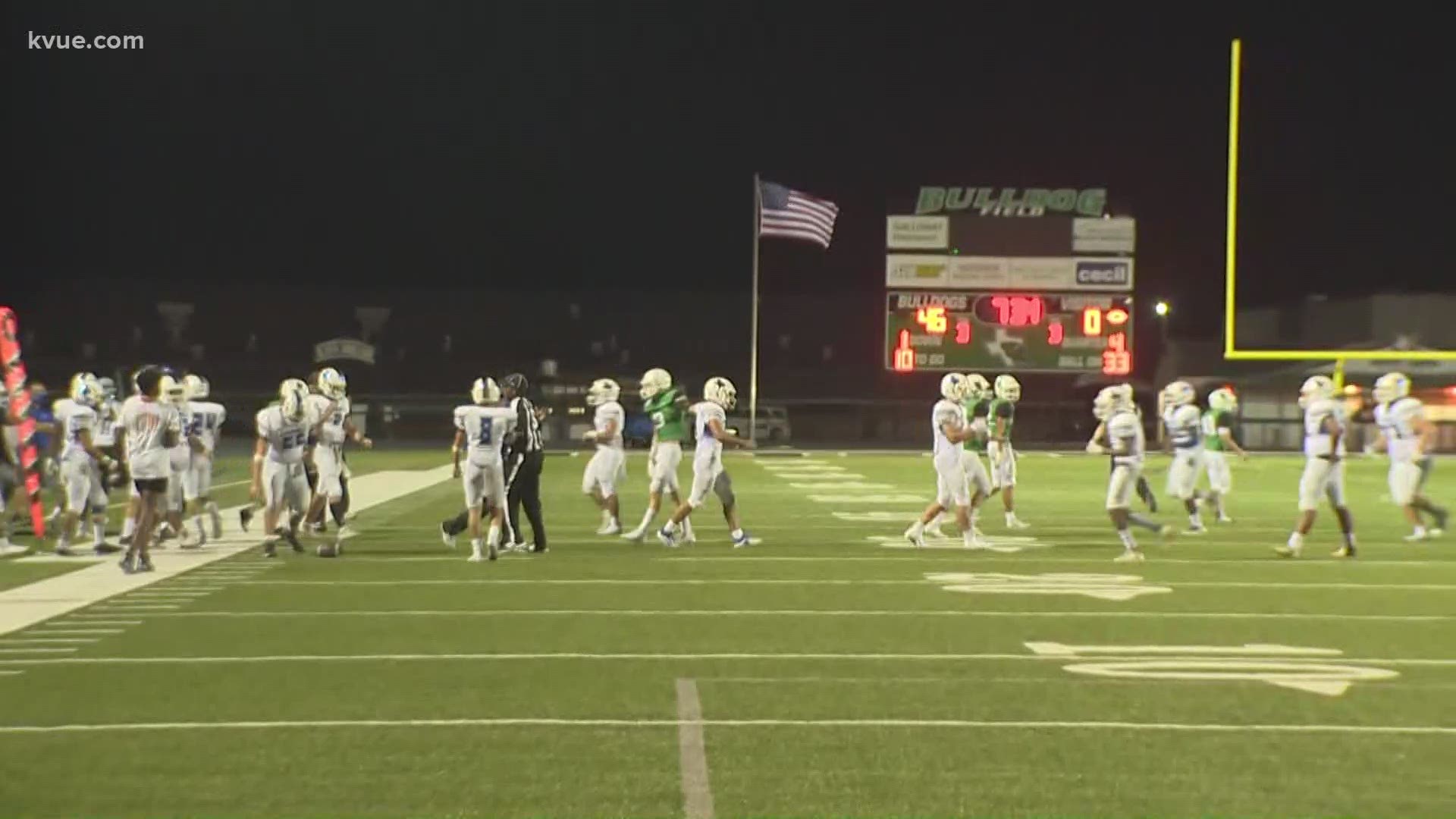 BURNET, Texas — It's week one of the Texas high school football season and that means the KVUE Sports team is back to giving you the latest scores and highlights in the Austin area!

It also means we'll showcase one game as our Game of the Week, and the Jarrell Cougars and Burnet Bulldogs take the honor to start the season!

For a look at the latest district standings in Central Texas, click here for that story.

Football this year is inevitably way different than years past. COVID-19 has posed a threat to society since it shut down the sports world back in March. But now, Texas high school football is ready to be back in action.

Players for Burnet and Jarrell told KVUE they were grateful to be competing again, starting the season on time and said they are focused on all safety protocols in place. They don't want to just start the season, though. The players want to make sure they finish it.

"We feel really blessed," Burnet head coach Jerod Rye said. "It's been one of the biggest messages to our kids after having stuff taken away in the spring and summer, how blessed you should feel to be able to play the game that you love."

"Obviously there's some hesitancy towards COVID-19, but we're doing everything we can to be safe, taking our temperatures every day, wearing masks when we're supposed to and bringing our own water bottles," said senior wide receiver Weston Miller. "I feel completely safe out here, so I think everyone else does too."

Burnet will look to utilize its offense as a strength in this game, while the Jarrell Cougars adjust to moving up from 3A to 4A ball.

Kickoff for this game is scheduled for 7:30 p.m. KVUE will update this story with score updates, and don't miss the highlights from this game in the 10 p.m. newscast! KVUE's Friday Football Fever show begins on Sept. 25, so until then, catch the latest scores and highlights in KVUE's 10 p.m. newscast at the start of the show! You can also get the latest scores and highlights directly to your phone by downloading the KVUE app at kvue.com/app.

KVUE's Bryce Newberry attended his first Texas high school football game and spoke with some Burnet fans about the return of fall sports.

Here are some of the things Burnet fans had to say about the return of high school football:

"Burnet has always been a huge football town," Kelsie Warner said. "We love it. We live it."

"Everybody was kind of really looking forward to getting out and supporting the kids and just trying to find a way to get back to whatever the new normal is," Gary Wideman said. "This for us is kind of a right of passage ... this is where fall starts, even though it’s still summer."