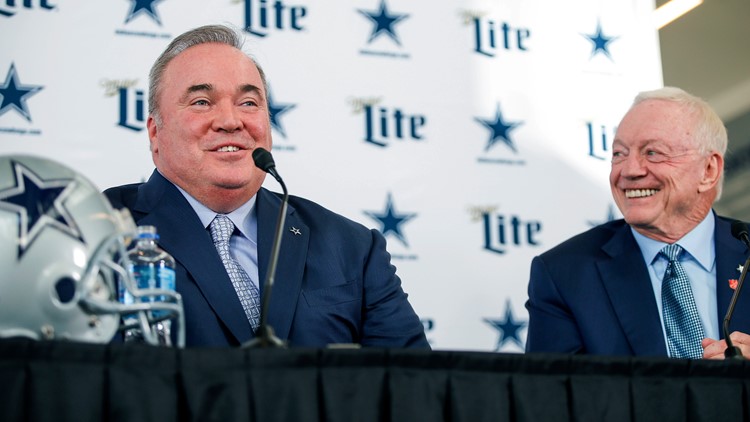 After a week and a half filled with intrigue, excitement, speculation, and -- occasionally -- inaction, Wednesday’s introductory press conference marked the first time the public and media heard from new Cowboys head coach Mike McCarthy.

McCarthy took the opportunity to address why he joined the Cowboys.

“This is the Dallas Cowboys, I don’t think you have to say anything more than that. And I am honored to be steward of this iconic franchise,” he said.

This was also the first time Cowboys owner Jerry Jones spoke to the media since the team’s season-ending loss to the Philadelphia Eagles on Dec. 29. He shared why he thought 56-year-old McCarthy was a good fit for the job.

“I just think it’s lightning in a bottle. We were fortunate at this time to have him sitting here," said Jones. "You love the ambition and fire in a young person and the willingness to be great, and you love all of that, but obviously you want to get the experience that is involved in decisions.”

McCarthy, who was the coach of the Green Bay Packers for more than a decade, brings plenty of experience, as well as a Super Bowl ring. That played a big role in the decision to hire him, according to Jones.

“One of our primary goals in selecting the head coach of the Dallas Cowboys was to focus on a proven team builder and winner. Someone who’s got a proven track record of winning not only consistently, but at the highest level," Jones said. "And in Mike McCarthy we found a coach who not only checked those boxes, but also has the experience of taking an NFL team to the biggest stage -- the Super Bowl -- and completing the job."

For his part, McCarthy is eager to lead the Cowboys back to the big game.

“I won my first Super Bowl here in North Texas at AT&T Stadium, and I just want to tell you I am anxious and excited to get to work on winning the next Super Bowl for the Dallas Cowboys,” said McCarthy.

The Cowboys took a week to announce they were moving on from former head coach Jason Garrett after the Cowboys last game, and reportedly interviewed McCarthy before announcing Garrett’s departure.

Jones said the now-former Cowboys head coach was positive about the man who ended up replacing him.

“When we were talking about interviewing Coach McCarthy, Jason was talking about what a great guy he is, and his story, and how much we were going to enjoy just that part of it when visiting with him,” said Jones.

McCarthy’s coaching background prior to taking over the Packers was on the offensive side of the ball, and he’s excited about the potential he sees from the Cowboys offense, especially from quarterback Dak Prescott.

“I’m excited about the opportunity to work with Dak. I think what he’s done is very impressive,” said McCarthy. “I’ve always been impressed with him. You’re going to be able to run the whole offense and then some, and I think he has an incredible foundation to build off of.”

McCarthy was on the other side of some of the Cowboys’ most painful losses in the past decade, including playoff losses to the Packers in 2015 and 2017. The 2015 contest is often remembered for a controversial catch/no catch call involving Dez Bryant.

“That was one hell of an athletic play…I think it (the no catch) was the technical rule at the time,” McCarthy said.

McCarthy says he’ll spend the immediate future filling out his coaching staff and reaching out the players currently on the team. He also discussed how innovation will play a role during his time with the Cowboys.

“There’s a lot of things in football that have already been done before. So we’re trying to stay one step ahead of the opponent, and I like to think we’re not really innovating," he said. "It’s evolution that we’re keeping our eyes on.”