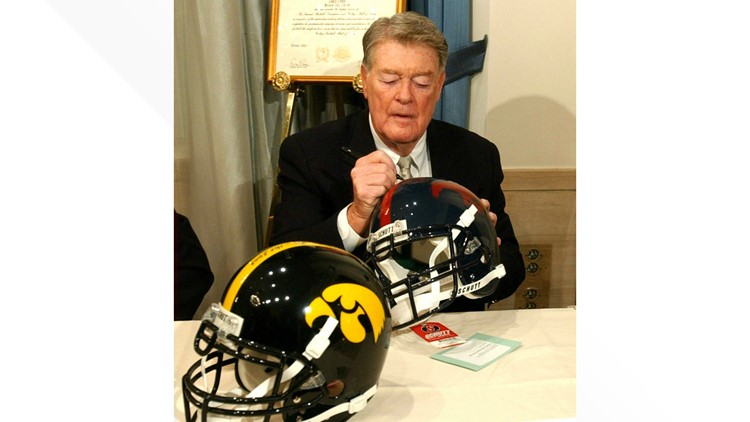 Photo by: AP Photo/Gregory Bull
Former college football coach Hayden Fry signs an autograph on a Southern Methodist University helmet at the Waldorf-Astoria hotel in New York Tuesday, Dec. 9, 2003. Fry was among eleven players and two coaches to be inducted into the College Football Hall of Fame in a ceremony.

Legendary football player and coach Hayden Fry passed away Tuesday evening. He was 90.

He played quarterback at Baylor and his first college head coaching job was at SMU.

Fry was living in Texas at the time of his passing.

Kirk Ferentz, Fry’s predecessor, had this to say on Fry’s passing:

“Hayden Fry is a college football icon and an Iowa legend. His Hall of Fame career is well known, but personally, he will always be the man who took a chance on me at the start of my coaching career. I was proud to coach with him and honored to succeed him when he retired. He’s been a great mentor and a true friend. I am forever grateful to him.”

“With our family at his side, Hayden Fry, beloved husband, father, and grandfather, passed away following a lengthy battle with cancer. We are comforted in our faith and knowing that Hayden is no longer suffering and resides now in heaven with our Lord. Hayden passed on Dec. 17, at the age of 90.

We are proud to know that our father’s life had a positive influence on so many people, the players, the coaches, and the fans who played for, worked with, and supported his long and successful coaching career. His legend will live forever with the people he touched and inspired, and the programs he led to greater heights.

Though Hayden was born in Texas and moved there more recently to be closer to our family, his love for the University of Iowa, his players and coaches, the people of Iowa, and the state of Iowa, is well known. Hayden often shared, 'I’ll Always Be a Hawkeye'.”