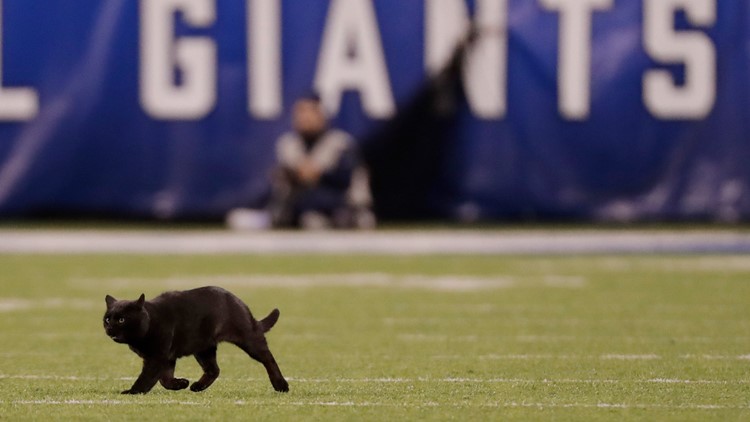 Photo by: AP
A cat runs on the field during the second quarter of an NFL football game between the New York Giants and the Dallas Cowboys, Monday, Nov. 4, 2019, in East Rutherford, N.J. (AP Photo/Adam Hunger)

DALLAS — The moment of the night so far at MetLife Stadium wasn't a touchdown run or a big-time catch. It was a black cat, stealing the show by running across the field and delaying the game for several moments.

The cat ran down the field on the far side of the field, away from where the Giants were driving in for a score.

Officials stopped play momentarily, as the security team tried to usher the cat off the field.

Fans were perplexed, and entertained, as the cat eventually ran into the far end zone to cheers from the East Rutherford crowd.

Eventually, they got the cat off the field, and play resumed, as the Giants kicked a field goal to take a 12-3 lead.

Quite the omen, for a Cowboys team playing poorly, against a bad New York Giants team.

And the Cowboys ended up winning that game-- but did that black cat bring them some sort of luck? We may never know.

But the kitty did blow up on social media, with people loving every minute of the interlude.

We highlighted a few of the posts most deserving of 'a-paws' on #IAMSTILLUP Tuesday morning.