Wise: To go or not to go to the White House -- that is the question (and society's new litmus test for your politics, world view, even fan worthiness)

Minus a fifth of their 45-man roster, the Nationals accept President Trump's invite to celebrate their World Series title. Social media predictably blows up. 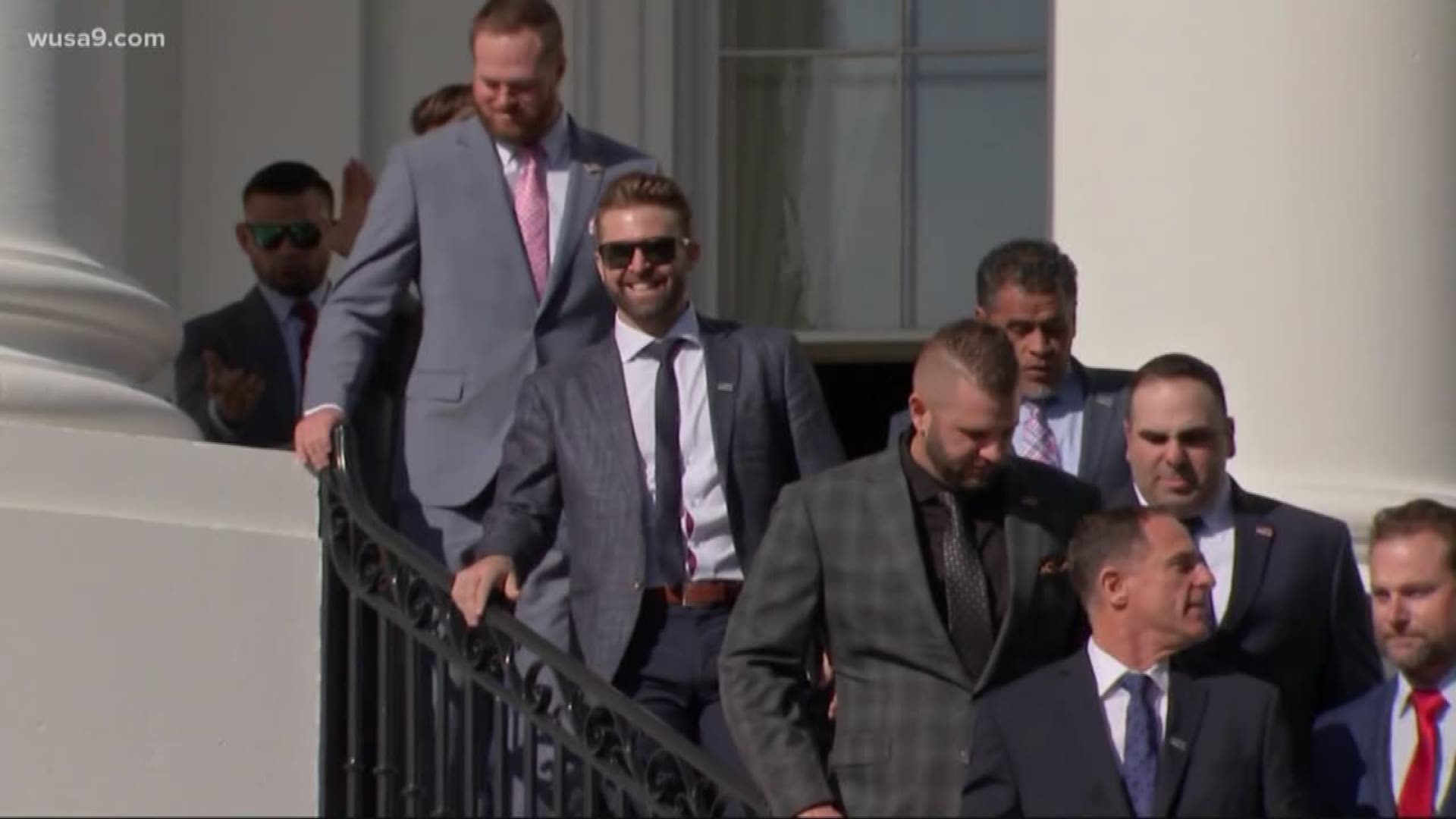 WASHINGTON — In the court of public opinion, it sadly now comes down to this: If you accept an invitation to celebrate a championship at the White House, you are viewed by much of blue-state America as a supporter of a Racist in Chief and an administration that has set this nation backward 50 years or more. To red-state America, of course, you get it and can be counted to be down for the cause.

Heaven forbid if you just showed up to support your teammates and take a selfie in the West Wing. Forget it. In this toxic political climate, you've got no chance.

Take Monday afternoon, on the White House lawn. Kurt Suzuki was called to the podium by President Trump. The veteran catcher for the Washington Nationals began making his way to the podium when Manager Dave Martinez vaguely tells him to put on the "MAGA hat," the red ballcap with Trump's 2016 campaign slogan, "Make America Great Again," emblazoned above the brim.

Suzuki looked almost embarrassed by the attention and quickly said, "I love you all," twice. But not before Trump grabbed him from behind and Suzuki put his arms out as if he were Kate Winslett being held by Leonardo DiCaprio on the bow of the Titanic, and someone was about to shout, "I'm the king of the world!"

In less-polarizing times, this was a ham-it-up moment featuring a World Series champion and the leader of the free world. But today, depending on ideology and leanings, Suzuki was either eviscerated for showing support for Trump, congratulated for showing proper respect to the office of the president or harshly criticized for being part of the festivities at all.

This is where we are, America. As an athlete from a pro or college championship team, your visit to the White House has now become a referendum on your own politics, racial sensitivity, heck, even your humanity.

Without knowing the nuance  -- without weighing whether a person's decision to attend such a ceremony might have to do more with their respect for the history of the highest office in the land and nothing to do with their tacit support for the person now occupying that office -- we have ascribed our own belief systems onto others, whether they share them or not.

And just like that, a group of players who have done more to unify people of disparate races, religions, creeds and politics the past couple of months than any Washington sports team in recent memory (including the Capitals), have been labeled one of two things:

b) one of nine conscientious objectors who stayed far away from the ceremony. (The big names who did not attend the ceremony were Anthony Rendon, Victor Robles, Michael Taylor and outspoken reliever Sean Doolittle.)

RELATED: The Nationals visited the White House, and several teammates were missing

Other than those who spoke out directly about their intentions -- like Doolittle, a vocal supporter of LBGTQ rights, saying, "I don't want to hang out with a guy that talks like that,"  -- it's unfair to paint either of these two groups with a broad brush.

Not that it has stopped us.

Take the video of Series MVP Stephen Strasburg appearing to blow off a handshake attempt by Trump. Apparently Strasburg did not see the president putting out his hand and later shook it. But one social media moment has suddenly done what the opposite did for Suzuki and Ryan Zimmerman, who clearly endorsed the president.

Whatever praise or criticism he received for that video, Strasburg felt strongly enough about it that he tweeted for the first time in 18 months. "Fake News," he wrote above the video, which is time-stamped 6:30 p.m., Nov. 4, 2019.. The last time Strasburg Tweeted before today: April 9, 2018.

The Trump Effect is clearly at play in what was once an apolitical White House tradition, featuring Ronald Reagan hitting wide receiver Ricky Sanders going across the White House lawn after the second of Joe Gibbs' three Super Bowls.

Since Trump took office, there have been 20 potential ceremonies for pro and college sports champions. They include all four major-revenue sports (the NBA, NHL, MLB and the NFL), the WNBA and men's and women's college basketball champions.

To date, 10 teams either declined the invitation or were disinvited after comments in the media that disparaged Trump. The most prominent teams not to attend were the Golden State Warriors and the Philadelphia Eagles. Meantime, the NFL's Patriots and every Stanley Cup and World Series champion accepted an invite and took part in a ceremony.

Not a single WNBA champion has been invited by the Trump White House.

Either way, it took less than a week for a team that fostered a communal gathering in divided Washington to splinter the masses the moment they stepped on the White House lawn. Some of the same fans who would have probably embraced in euphoria had they been seated next to each other at Game 7 in Houston are now beefing on social media, flexing their Twitter muscles.

Bottom line: You can't just go to the West Wing and take a selfie anymore without the rest of America deciding who you are, what you stand for and why in the world you would think you could visit the nation's most famous residence without any brushback from the angry keyboard masses?

RELATED: Relive the best moments of the Nationals Victory Parade