The City of Austin's relaxed rules on camping went into effect on July 1. Since the city council's vote, many claims have been made about homeless camps. 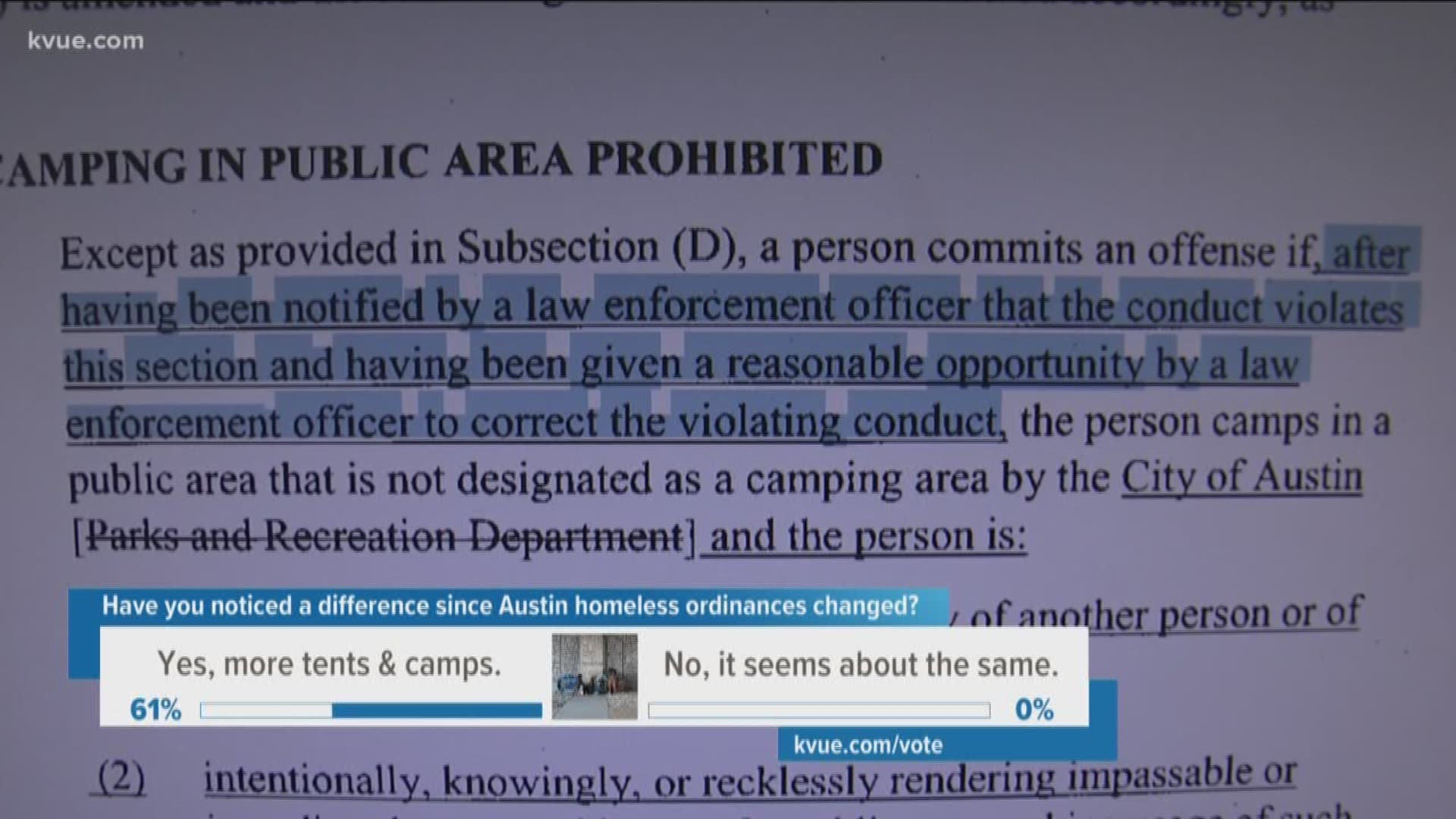 Since the city council vote, people have taken to Twitter to ask a lot of questions about the relaxed camping rules.

To verify some of those questions, KVUE took a look at the actual ordinance that was passed.

The council took the existing code that prohibits camping in public places (Section 9-4-11) and added a section to it. Camping in a public area still isn't allowed if the person is endangering the health or safety of others or they are making the public area impassable and fail to move after an officer asks them to.

Some folks have asked if this means people can turn Zilker Park into some sort of "tent city." The answer is no. Parks have their own section in the city code (Title 8) and Section 8-1-12 states, "A person may not fish, camp, or use a specific area in a public recreation area between 10:00 p.m. and 5:00 a.m. without an approval."

Someone on Twitter tagged Governor Greg Abbott and KVUE in a photo of a camp set up outside a South Austin Discount Tire Co. store:

Credit: KVUE Viewer
A KVUE Viewer says she took this photo outside a Discount Tire in South Austin on Sunday, June 30th.

The KVUE News team has quite a few questions about whether this camp is authentic or was staged. A Discount Tire spokesperson said it's "misleading" to call this a homeless camp and said, "the individual left the property shortly after the photo was taken and no business was interrupted."

It's worth noting the picture was posted on Sunday when Discount Tire Co. is closed and before the new ordinance even went into effect.

If someone had camped outside the store, KVUE can verify that would be and still is illegal because it would be trespassing on private property.

In other news, Gov. Abbott and Austin Mayor Steve Adler got into a tweet-frontation earlier this week after Gov. Abbott shared a tweet from someone who claimed a traffic crash was caused by homeless people darting into the street. Gov. Abbott blamed the city's policy.

"Look at this insanity caused by Austin's reckless homeless policy," Gov. Abbott tweeted. "All state-imposed solutions are on the table including eliminating local sovereign immunity for damages and injuries like this caused by a city's homeless policy. The horror stories are piling up."

Mayor Adler responded with a photo of an email from the Austin Police Department that stated no one ran into the street to cause that crash.

KVUE News spoke with APD, who said staff reviewed video of the crash and it appeared a driver ran a red light. It's also worth noting: darting out into traffic is always illegal.

If you have more questions about the homeless ordinances, send them to verify@kvue.com.

Neighborhood in Buda complains about the smell from a local business