An Army memo sent from Fort Sill, Okla. states that Texas law enforcement found a shooting threat on the dark web for a Joker movie premiere at an unknown location. 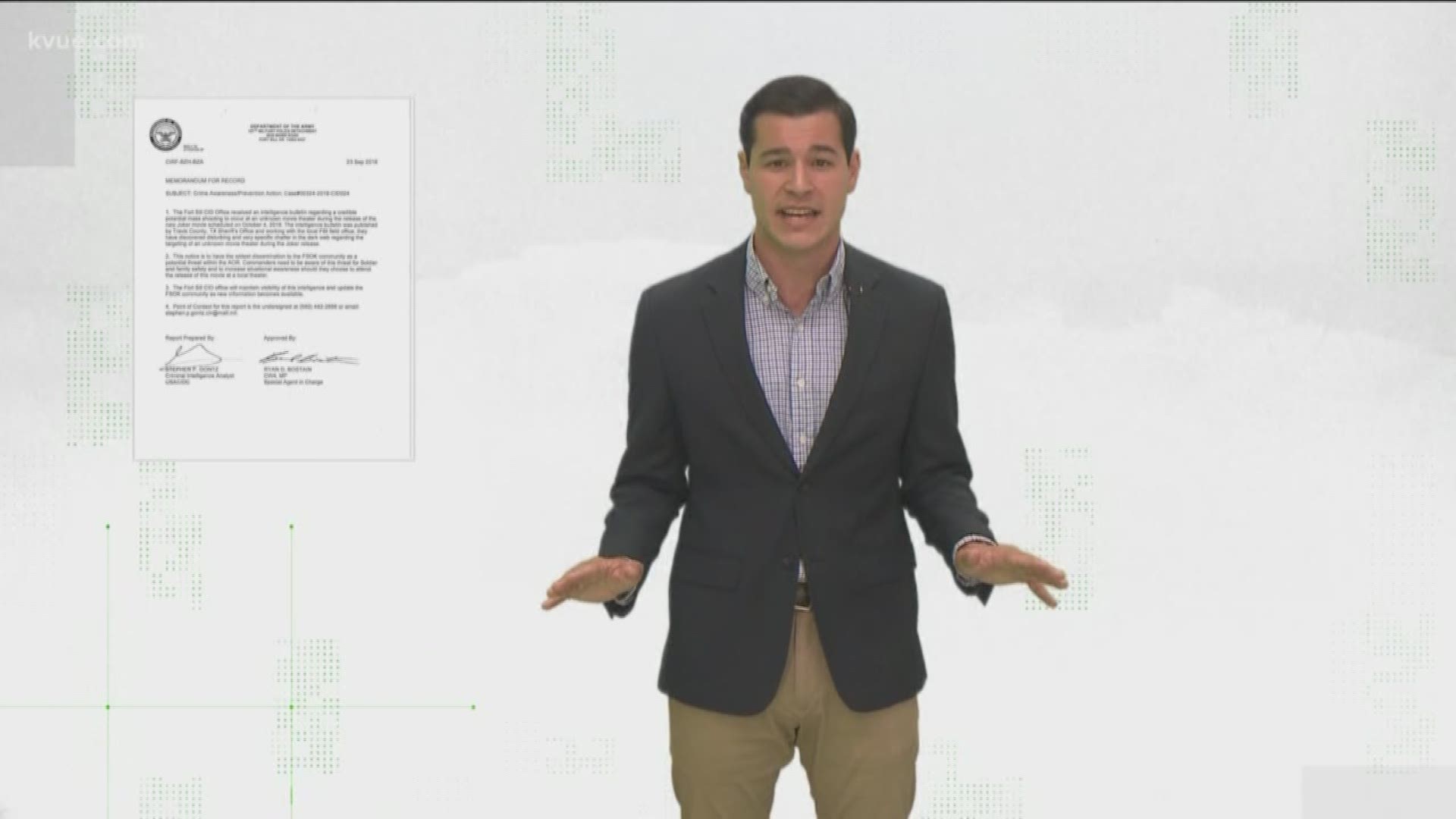 AUSTIN, Texas — An Army memo claiming a "credible potential mass shooting" at an unknown movie theater for the release of "Joker" on Oct. 4 has gained a lot of attention online.

The memo was sent out from the U.S. Army Criminal Investigation Command office at Fort Sill, Oklahoma, citing that Texas law enforcement had published an intelligence bulletin claiming "disturbing and very specific chatter" was discovered on the dark web regarding the targeting of an unknown movie theater.

KVUE has looked into these claims with the FBI, local law enforcement, and the Army.

First, let's start with the memo itself.

Here is what the memo reads in its entirety:

1. The Fort Sill CID Office received an intelligence bulletin regarding a credible potential mass shooting to occur at an unknown movie theater during the release of the new Joker movie scheduled on October 4, 2019. The intelligence bulletin was published by Travis County, TX Sheriff's Office and working with the local FBI office, they have discovered disturbing and very specific chatter in the dark web regarding the targeting of an unknown movie theater during the Joker release.

2. This notice is to have the widest dissemination to the FSOK community as a potential threat within the AOR. Commanders need to be aware of this threat for Soldier and family safety and to increase situational awareness should they choose to attend the release of this movie at a local theater.

3. The Fort Sill CID Office will maintain visibility of this intelligence and update the FSOK community as new information becomes available.

Reference of the Travis County Sheriff's Office in the memo stirred up conversation online, where people seemed to interpret the memo as if the shooting were to occur in Travis County.

The Travis County Sheriff's Office told KVUE they could not verify the letter.

KVUE reached out to Chris Grey, the Chief of Public Affairs for the USA Criminal Investigation Command, and he confirmed Travis County Sheriff's Office was mistakenly put on the memo. It should have read the Joint Crime Information Center, Texas Department of Public Safety, according to Grey.

Grey issued this statement to KVUE:

"I can confirm that the U.S. Army Criminal Investigation Command field office at Fort Sill, Oklahoma did send out a memorandum on this subject to a select internal group at Fort Sill on Monday.  The internal law enforcement information was obtained from the Joint Crime Information Center, Texas Department of Public Safety. The Fort Sill CID office did so out of an abundance of caution to help keep our Soldiers and their families safe.
At this point, we are not aware of any information indicating a specific, credible threat to a particular location or venue. I can also confirm that including the Travis County Sheriff's Office was a mistake in the memo."

KVUE reached back out to TCSO for comment after we learned of the mistaken attribution in the memo. TCSO confirmed the agency was referred to in error.

Grey said the original bulletin, which he says was published by Texas DPS, was meant for law enforcement personnel.

"When the Special Agent in Charge at the Fort Sill Field Office decided to send a memo to a select group of personnel at Fort Sill, it became public," Grey told KVUE.

Texas DPS referred KVUE back to the U.S. Army for more information regarding the details from the memo.

KVUE also reached out to the local FBI Office, which gave the following statement about the memo:

"While our standard practice is to not comment on specific intelligence products, the FBI is in touch with our law enforcement and private sector partners about the online posts. As always, we encourage the public to remain vigilant and to promptly report suspicious activity to law enforcement."

After sorting out the credibility of the threat with Fort Sill, FBI, and local law enforcement, KVUE's Luis De Leon spoke with Fred Burton, Vice President of Intelligence at Stratfor, about the memo claims and general awareness of mass shootings.

Stratfor is a local geopolitical intelligence company. Burton said people should not be afraid to go out and see the movie, but being aware of your surroundings should be a part of your daily routine.

“I would not be afraid," Burton said. "Having said that, the advice that I would give would be that any time you’re in a public venue like this, where there’s a lot of people and you’re in a confined space, think about alternative ways of getting out of a location just as part of your new norm."