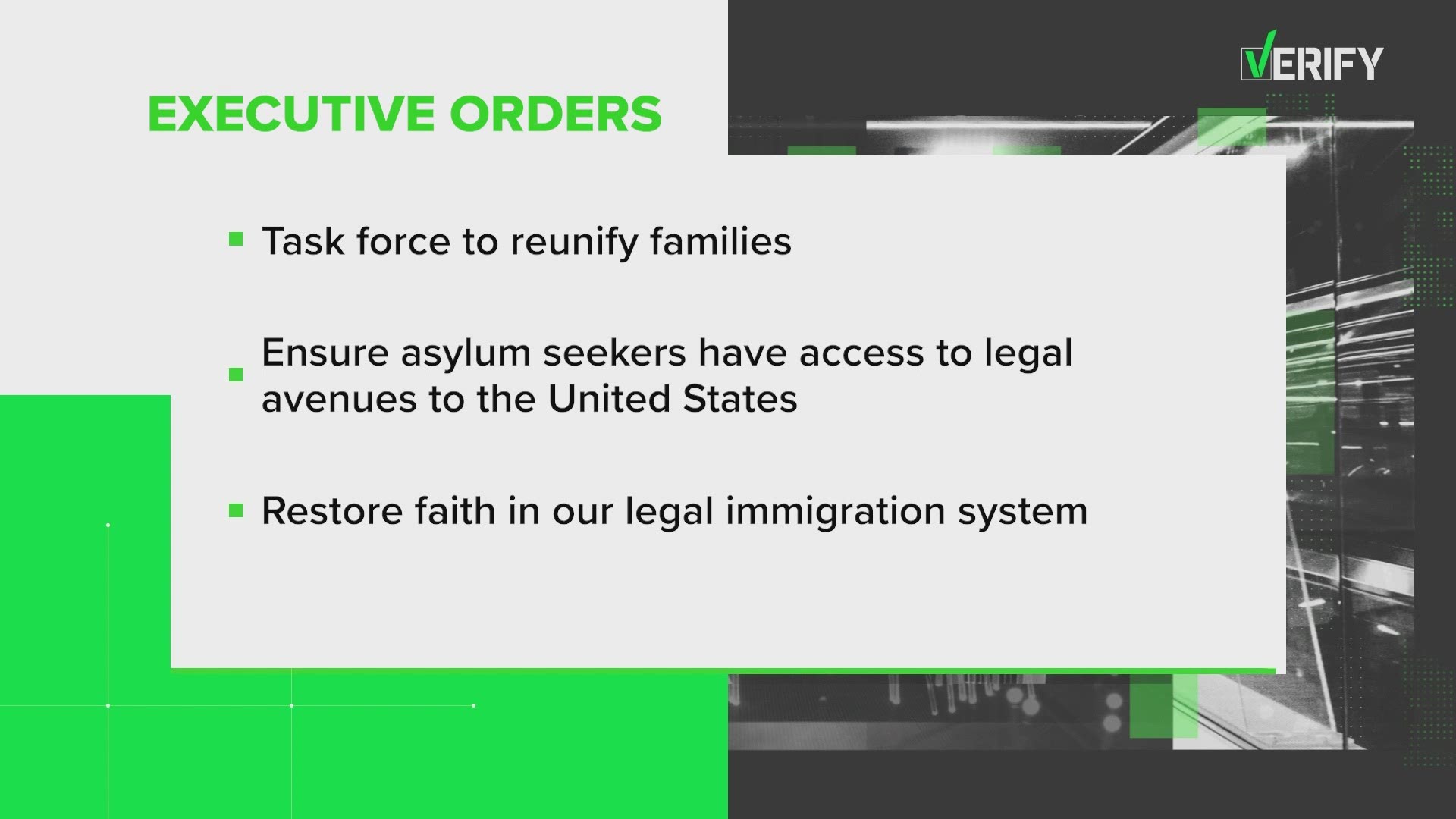 Biden will ask a task force to figure out how to reunite families separated at the border, work to make sure asylum seekers get legal access in the U.S., and to “restore faith” in the immigration system.

To help us verify what this means, we pulled this Homeland Security report on migrant protection, a lawsuit regarding family separation, read data from Syracuse University and spoke with Austin immigration attorney Kate Lincoln-Goldfinch.

Last October, court records show the federal government cannot find the parents for 545 children. The families were separated at the border under the Zero Tolerance policy.

A government report issued last month shows the feds took more than 3,000 immigrant children away from their parents. And this federal investigation showed Border Patrol in Texas was “unable to identify adults held for prosecution who were separated from accompanying children.”

The American Civil Liberties Union filed a federal lawsuit to help reunite some of them that were found but the parents were deported.

For migration strategy and asylum cases, Syracuse university shows immigration courts are backed up by 1.2 million cases, most in Texas with 210,649 pending by Jan. 1.

“Under the previous Administration, every immigrant was a priority for enforcement. So someone who maybe got pulled over for driving without a license or a speeding ticket will be arrested and placed into deportation proceedings. Even if they have no significant criminal history, they have long ties to the U.S., or U.S. citizen kids. It has really put everyone into this already overburdened system,” said Lincoln-Goldfinch.

“First, the Administration will address the underlying causes of migration through a strategy to confront the instability, violence, and economic insecurity that currently drives migrants from their homes. Second, the Administration will collaborate with regional partners, including foreign governments, international organizations, and nonprofits to shore up other countries’ capacity to provide protection and opportunities to asylum seekers and migrants closer to home. Finally, the Administration will ensure that Central American refugees and asylum seekers have access to legal avenues to the United States. The Secretary of Homeland Security is also directed to review the Migrant Protection Protocols (MPP) program,” the White House fact sheet shows.

“The Migrant Protection Protocol is the program that has left asylum seekers in Mexico to await their hearings, and we're talking about more than 70,000 people who have been awaiting a hearing in Mexico, many of whom are living in these makeshift refugee tent camps along the southern border,” Lincoln-Goldfinch said.

This Homeland Security document shows more than 24,000  people are in Mexico waiting for their asylum cases.

Part of these rules will have agencies review the Public Charge rule and policies related to it. The administration looks to “streamline the naturalization process,” showed the fact sheet.

“One of the main policies was rolled out last year, and that was the public charge rule,” Lincoln-Goldfinch said. “Even though undocumented immigrants aren't eligible for federal public benefits, the effect of that policy was to send a message to the immigrant community and to mixed-status families that they should not be accepting public benefits even for their U.S.-citizen kids."

“So, enrollment in programs like TANF, Temporary Assistance for Needy Families, or CHIP insurance food assistance for U.S.-citizen kids has declined since the public charge rule. And it's a really sad thing when you think about all of these kids who are U.S. citizens, who need the support of food and medical care, have stopped getting the support that they need because of the fear of the public charge rule and how it would impact the family,” Lincoln-Goldfinch added.

U.S. children are allowed to receive benefits even if the parents are undocumented.

“There was a lot of misinformation about the public charge rule and a lot of fear in the immigrant community. And I think that's going to be the biggest impact of the revocation of the public charge rule will be to send a message to the immigrant community and to mixed-status families that their kids can receive the benefits that they need if they qualify for them, of course,” she said.

Lincoln-Goldfinch has hope for unity.

“I know that immigration is a really divisive issue for people, and America is a land of immigrants, it's who we are and we're actually not in a new place. We've been here before and migrants from the past, whether they be Irish or Catholic or German or Italian, Jewish, Chinese, Asian, we have had so many rounds of xenophobia against certain groups of people," she said. “We've overcome these periods of xenophobia and restrictions in the past. And we are experiencing and have experienced recently another round of xenophobia and restrictionism. But America is a land of immigrants. Diversity is what makes us beautiful. And I think we will get to a point where we start to recognize that together and move forward and get out of this period of divisiveness.”