'These passengers will not be released into the general public' | Cruise passengers may be quarantined in SA, officials say

Multiple quarantines have taken place at Joint Base San Antonio-Lackland. Grand Princess passengers would be the latest group to be brought to the base. 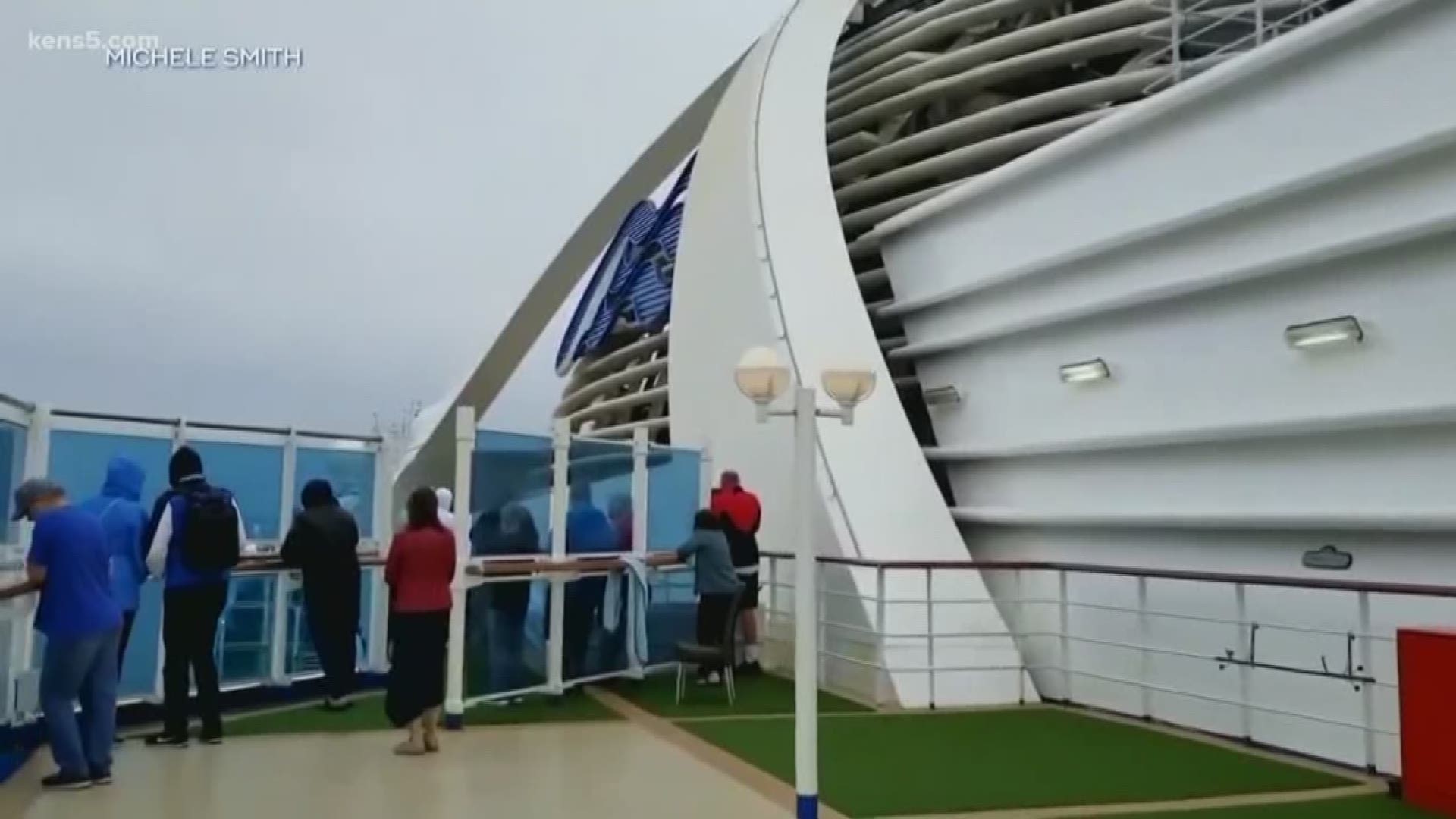 SAN ANTONIO — Texas Governor Gregg Abbott's Office said Sunday that some passengers currently on board the Grand Princess cruise ship could be coming to Joint Base San Antonio-Lackland.

There were 21 confirmed cases of coronavirus on a previous cruise. The Grand Princess is expected to dock near San Francisco Monday.

A statement was released by The US Department of Health and Human Services at 9:35 a.m. It says:

"The U.S. Department of Health and Human Services will work with state and local partners in California to support passengers returning to the United States on the Grand Princess cruise ship. The ship will dock temporarily in a non-passenger port in San Francisco Bay.

Passengers will be transferred to federal military installations for medical screening, COVID-19 testing, and a 14-day quarantine. Nearly 1,000 passengers who are California residents will complete the mandatory quarantine at Travis Air Force Base and Miramar Naval Air Station, and residents of other states will complete the mandatory quarantine at Joint Base San Antonio Lackland in Texas or Dobbins Air Force Base in Georgia. Throughout the quarantine, passengers will be monitored for symptoms of COVID-19.

The Department of State is working closely with the home countries of several hundred passengers to arrange for repatriation to their countries."

"Governor Abbott has spoken with Vice President Pence regarding the repatriation of American citizens, including approximately 90 Texans, to Lackland Air Force Base from the Grand Princess Cruise ship off the coast of California.

These passengers will not be released into the general public. All of the repatriated citizens will remain at Lackland under quarantine until they clear the revised and heightened testing protocol to ensure they are not affected by the COVID-19 virus.

Once cleared, Texans will be released to return home while non-Texans will be safely transported to their home state using the same public safety protocol used for the Diamond Princess passengers who were previously quarantined at Lackland."

There are currently 3,533 people on board the Grand Princess.

"Last night, we received word that the federal government has opted to quarantine evacuees from the Grand Princess cruise ship at Lackland AFB. We've been assured that all of the evacuees arriving in Lackland are without symptoms. We've also been informed that a significant number of the evacuees are Texas residents.

The Vice President has confirmed to Governor Abbott that every evacuee would be tested upon their arrival to Lackland. We are working with the U.S. Department of Health and Human Services and have asked them to keep this federal operation on federal ground with federal resources.

This is critical so that we keep our local hospitals and medical capacity at heightened readiness for any potential spread of COVID-19 locally. To date, there are zero confirmed cases of community-transmitted COVID-19 in San Antonio or Bexar County. Throughout the weekend I have been coordinating with our area congressional delegation and the Governor's Office to ensure our requests are met, and I'm pleased that we are united in those efforts.

We are working with the federal administration, but we are also holding all accountable to keep the quarantine from exposing the public. I reserve all tools available to protect the residents of San Antonio.

We will continue to prioritize the utmost safety for the residents of San Antonio and exhibit compassion for these evacuated Americans who deserve to come home for proper care. I will continue to provide critical updates as I receive more information."

US Representative Lloyd Doggett released the following statement regarding the new evacuees coming to quarantine at Lackland:

“Public safety of Bexar County residents is my top concern. While appropriate that Texans are helping Texans, San Antonio has been placed on the front lines of this pandemic without adequate federal support.

It is essential that these additional evacuees be confined to Lackland for all testing and treatment rather than burdening local hospitals, which are preparing for any potential community spread.

Contrary to President Trump’s grandiose claim on Friday, San Antonio currently has capacity to test only a modest number of individuals. This lack of testing capability is jeopardizing public health across America.”

RELATED: Grand Princess cruise ship with more than 40 Minnesotans to dock in Oakland