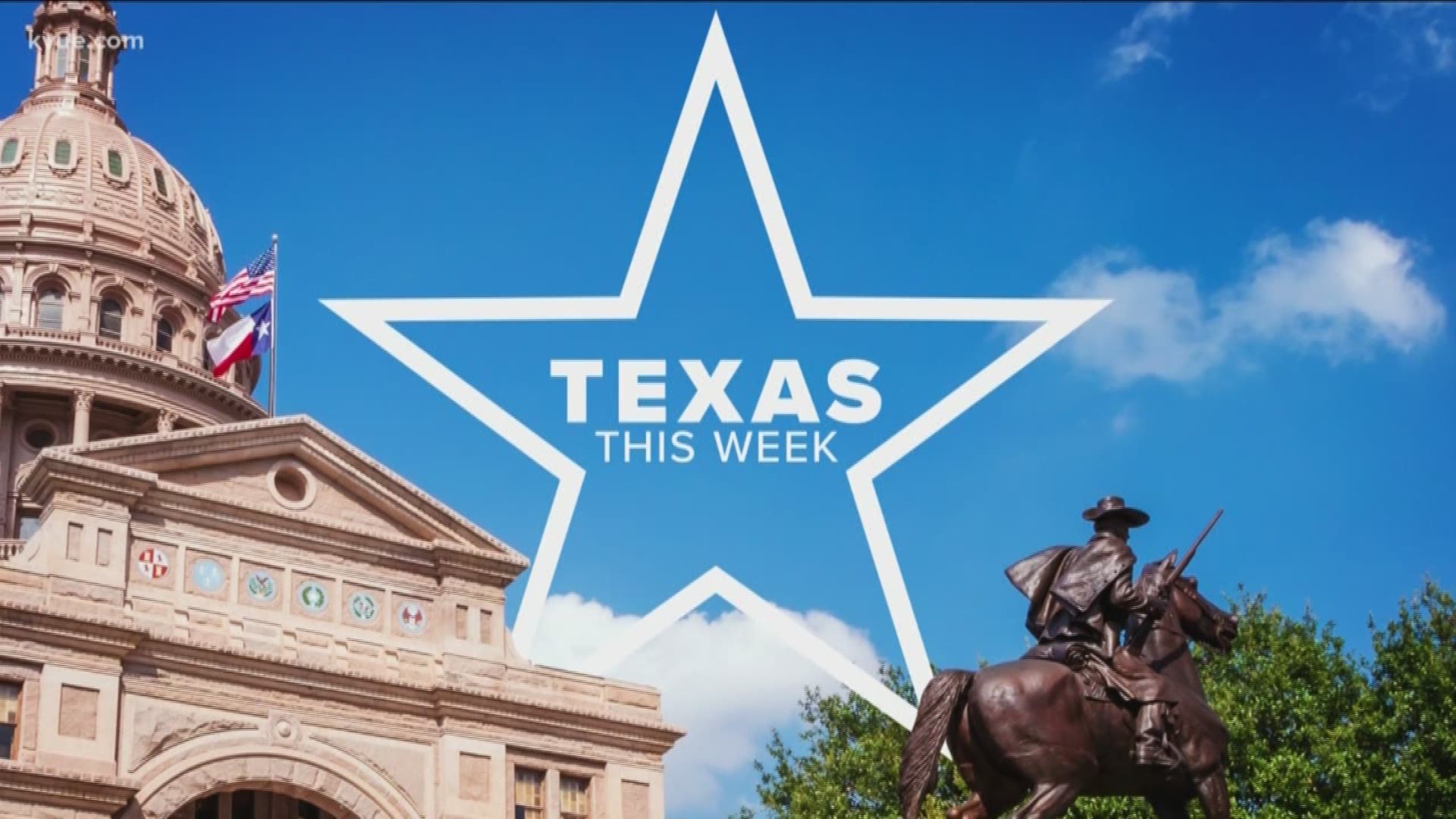 AUSTIN, Texas — From elections to addressing homelessness, it was a busy week in Texas politics.

Only 12% of all the registered voters in Texas fulfilled their civic duty and voted in the Nov. 5 election. There were 10 propositions to amend the state constitution. Nine of them passed, including a measure to make it harder for state leaders to ever implement a personal income tax. Click here to see more election results.

The State of Texas now has a temporary campsite for the homeless in Austin. This week, Texas Department of Transportation crews cleared homeless camps from highway underpasses at the direction of Governor Greg Abbott. The Governor shared before and after pictures on Twitter and wrote there's now a temporary place for the homeless to go. The tract of state-owned property near Highway 183 and Montopolis Drive in Southeast Austin has portable restrooms and hand washing stations. Staff in the Governor's office say multiple charities have volunteered to deliver food to the area and DPS troopers will secure the area.

The University of Texas and Texas Tribune released new poll data this week on President Donald Trump. Nearly half of the Texas voters surveyed, 46%, believe the congressional impeachment investigations are justified while 42% think they are not. But voters surveyed are still backing the president. In hypothetical matchups for the 2020 election, more voters say they would vote for the president than the top three Democratic front runners. Click here to find more poll results.

RELATED: Texas voters split on whether impeachment inquiry is justified, according to UT/Tribune poll

Now that the 2019 election is behind us, it's time to turn out attention to the next election, the 2020 March primary. Ten Democrats are running to challenge U.S. Sen. John Cornyn, including former Texas Congressman Chris Bell. He sat down with Ashley Goudeau to discuss his campaign.

Ashley Goudeau: For our viewers who maybe aren't familiar with you, tell us a little bit about yourself.

Chris Bell: "Well, I am a lawyer and I served as a member of the Houston City Council for five years and then I was elected the U.S. Congress and then got redistricted out of Congress and then came back to Texas and was the Democratic nominee for Governor in 2006. And I'm a husband and father of two boys, and a University of Texas graduate.

Goudeau: Why you are running for the U.S. Senate.

Bell: "I'm very upset with the overall direction of the country. I think Donald Trump has been a disastrous president and I'm very disappointed that John Cornyn has basically been a water boy for Donald Trump and one of his chief enablers. And, especially now, when we read about and hear about what's going on in the White House and the very disturbing reports and the impeachment inquiry and the fact that John Cornyn won't even step up and say that he wants to have a fair investigation just immediately calling this misguided. That's wrong, and that's not the kind of leadership we need here in the state of Texas."

Goudeau: So, is it largely Sen. Cornyn's support of the president that makes you want to challenge him?

Bell: "Well, and the fact that that support leads to decisions that are not in the best interest of the State of Texas. You look at what's going on on the border and the detention camps and the cruelty, and people stepping up and doing the right thing and condemning what's going on on the border, but not John Cornyn. Instead, he condemns the people who stop doing business with those running the detention camps. I think that's completely the wrong approach. When President Trump suggested that we place very damaging tariffs on Mexico, a lot of Republican Senators came out and said 'this is a bad move' and condemned that action. John Cornyn went and joined with them. That would've been disastrous for the State of Texas. So, yes, I think that this state is in desperate need of new leadership. I love public service, I think I served well when I had an opportunity and I would like to do so again."

Goudeau: Let's talk a little bit about that impeachment inquiry, where do you stand on that? What are your thoughts?

Bell: "Well, I've come out in support of impeachment because, you know, I just can't take it anymore. When I read about what he was doing and using that office for obvious personal gain. The way, I read the transcript, and what he was asking the leader of Ukraine to do. There has to be an inquiry. And, I think it's very clear that he's stepped way over the line.

Goudeau: Let's talk about some of the issues facing Texans. One of the most important is health care. What can we start to do to better address access to health care for Texans?

Bell: "Well, I think it begins with access to Medicare. I think there has to be a public option in order to get insurance companies to play fairly. We've taken some steps in the right direction with the Affordable Care Act in terms of accessibility, but then it comes down to affordability. And a lot of people have been left with what are basically catastrophic terror policies because the deductibles are so high. And the only way you're going to get the private insurance companies to get in line and start being competitive is if people do have access to Medicare before the age of 65 – if there is a public option. And this has wide-ranging effects. And it's not just about access to Medicare, it's also about reproductive health care. That's something that's extremely important here in Texas given the actions we've seen taken against Planned Parenthood that has cut off access to health care for thousands of women. And then something that's very disturbing, Ashley, is the maternal mortality rate here in the State of Texas. If we were a country, we would be behind, rank last among developed countries when it comes to the maternal mortality rate. That is extremely upsetting and what that really has a lot to do with is the fact that a lot of women do not have access to Medicare or access to health care throughout their lives. That's one of the big predictors as to whether a woman will have a healthy pregnancy, if they have access to health care, good health care, throughout their lives. And obviously many in Texas don't and it's leading to a horrible statistic and one that we should all be ashamed of."

Goudeau: With the mass shootings that happened in Texas, two in one month, 29 people killed. What do you suggest we do about guns?

Bell: "Now, there's another issue where John Cornyn's absolutely on the wrong side, not wanting to talk about background checks or universal background checks. Not wanting to support red flag laws. I support both. But I also support a ban and buyback program. I think it makes the most sense and I think that it would need to be mandatory for people to have an allotted amount of time to turn in their guns and be compensated for those weapons of war, that they bought lawfully. And so, I do think they're entitled to compensation. It will be expensive, but I think it will be money well spent. And that's the only way we're going to be able to start getting those assault weapons off the streets."

Goudeau: But there's a large population of folks who would say it's unrealistic to think people are going to give up their guns willingly and if there are "bad guys" out there who have the guns, I need to have a gun as equally powerful to combat.

Bell: "Yes, but if they're in possession of them then they would be breaking the law and you're in a position then to confiscate those weapons. We've had laws against certain weapons for a long time in the United States and here in the State of Texas. And people have been caught violating those laws and punished for violating those laws. And once people realize folks are going to be subject to punishment, that's probably going to serve as an incentive for people to turn the guns over. And you know, we have a lot of hunters here in the state of Texas and a lot of them are friends of mine, and all of them tell me they don't need assault weapons in order to go hunting. In fact, it goes against the very nature of hunting to use an assault weapon and so basically those assault weapons are only out there mainly to kill people – that's what they were designed to do, and that's what they've been doing, and we need to put a stop to it."

Goudeau: You are running in a very crowded field of Democrats. Several candidates want this – the opportunity to take on Senator John Cornyn. Why should our viewers select you?

Bell: "Because of my experience and especially given what has been going on in Washington, D.C. If you look at my record when it comes to ethics and fighting corruption, as a member of the Houston City Council, I chaired the Ethics Committee, I was honored to be asked Chair the Ethics Committee and pass some of the most sweeping ethic reforms we'd seen in the City of Houston, a revolving door ordinance to keeping people from working for the City one day the next day going to a private company and profiting from having worked for the City. A campaign finance ordinance, a lobbyist registration ordinance, all were passed while I was chairing the Ethics Committee. And then I went to D.C. and I broke a seven-year truce on the filing of ethics complaints in the House of Representatives – filing one against Tom Delay, who, at that time, I believe was the most corrupt politician in America. And it started his exit from the House of Representatives. I think that's the type of representation people in Texas are demanding. If we're going to get our democracy back, if we're ever going to have a clean government again, you're going to have to have people who have demonstrated a willingness to lead in that direction and I think people can look at my record, look at my experience and see that I would be the best to serve in the United States Senate for the people of Texas."