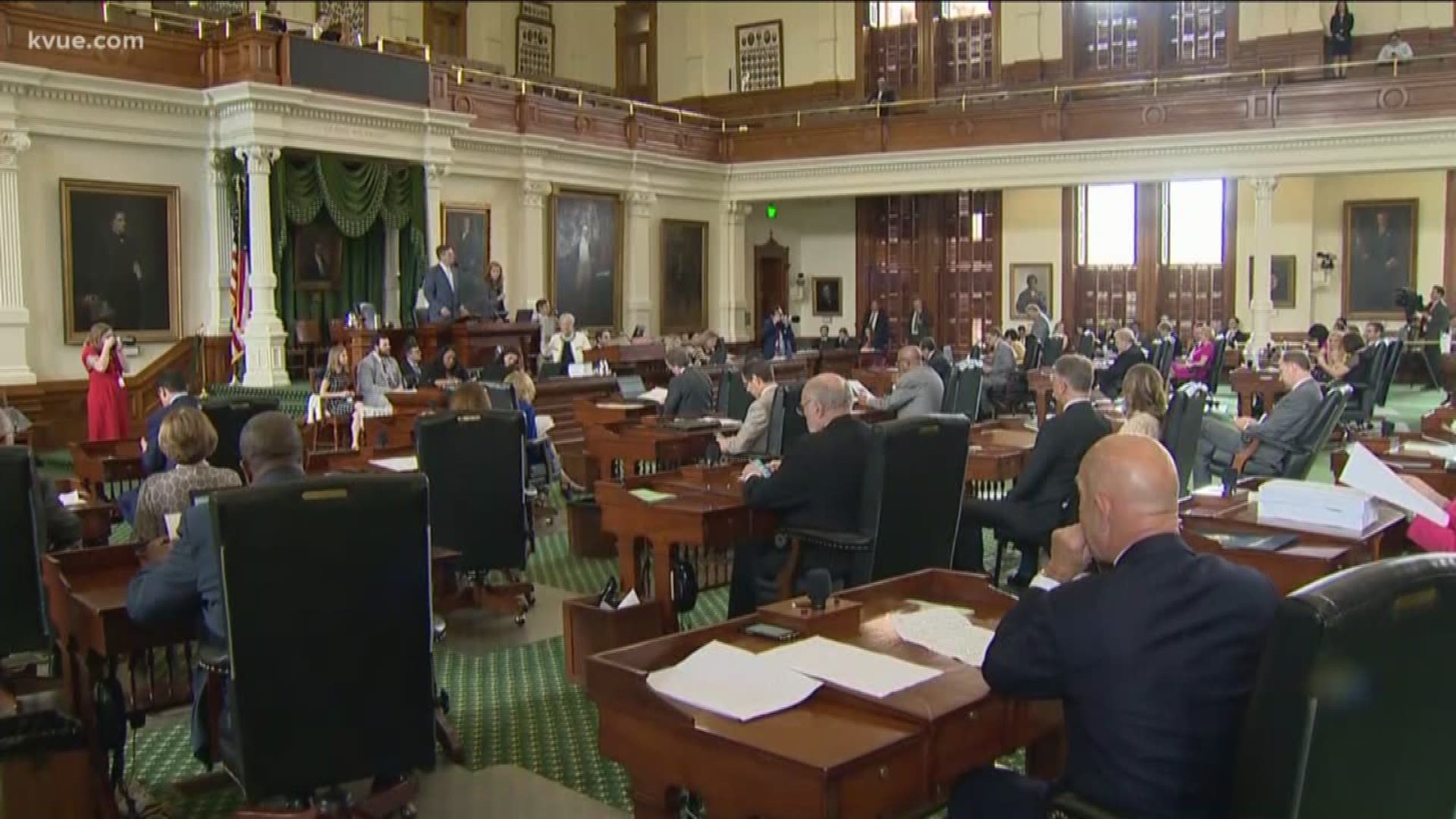 AUSTIN, Texas — An hour and a half before the Texas Senate met for the last time for the 86th Texas Legislative Session, Lieutenant Governor Dan Patrick sat down with KVUE Anchor and Political Reporter Ashley Goudeau to discuss the session.

Ashley Goudeau: Lieutenant Governor, describe the session in one word.

"Just one word. Teamwork..." said Lt. Gov. Dan Patrick. "The new speaker made the difference. Speaker willing to work with the Governor and myself. Coordinating the Senate and the House, working together, Chairmans, parliamentarians working together. Constant communication and none of that existed before. That's not a knock on the former Speaker, it's just style. From day one, the teamwork was evident when we had that press conference in front of the mansion. And we laid out our vision of what we were going to do this session. I've always wanted to do that. This time we had a third willing person who wanted to do that, the Governor's always wanted to do that, this time we had a willing third who was willing to do that. Because when you have a press conference between the state's three leaders, you put yourself on the line. Here's what we're going to do. And people will hold you accountable. So sometimes, by some there might be hesitancy to do that and we were not hesitant. We knew we needed property tax relief, school reform, teacher pay. That's what we talked about. In addition to our continual battle to continue to try to secure the border from the state side with the federal government. But those three big issues, property taxes, school finance reform and teacher pay were what we laid out. And we talked together weekly, multiple times a week for the last five months. Down to the last hours of the last day to get the deal done."

Goudeau: Tell me about those breakfast meetings.

"They were productive," said Patrick. "In the past, I think last year or the year before we even stopped them somewhere in mid-April. This year we kept them throughout the entire session. And they were meetings of substantial discussion. It was just the three of us, the Speaker, the Governor and myself, the Chiefs of Staffs and we walked through policy. And we talked about how this bill's moving, what this bill needs, what we need to address this issue in the Senate or in the House to get it passed by each body. And that's what we talked about. And one of the things we talked about, on numerous occasions, was we have to keep working together as a team. We laid it out, that's what we said we were going to do. If there were any disagreements, and of course there were along the way of five months of how we were going to do certain things, but we would keep them to ourselves...It was kumbayah as the headlines said. And that's good. People expect us to work as a team.

In Washington, in national politics, they never seem to end the campaign. Never. Either party. In Texas, we'll go to our corners and come out politically fighting for another election. Republicans want to elect Republicans. Democrats want to elect Democrats. But when we come here, the people expect us to work together. And in the Texas Senate and in the Texas House this session, that happened.

Once Abbott, the Speaker and myself set the vision of where we're going, that sends a message. If you were a Senator, it would send the message to you, 'Ashley, you better get on board because this is where we're going.' And then you leave it to the decision of the members, the committees, the 181 legislators, to help craft that policy with our staffs and our vision, but you leave it to them and they all did a great job."

Patrick said he believes accomplishing the "people's priorities," property tax relief, reducing recapture and paying teachers more, were the goal for all lawmakers this session.

"I think that that message finally sifted into every office," said Patrick. "When I came here in 2007 as a Senator and fought for property tax cuts, the first time I brought a bill to the floor, it only got eight Republican votes. Times have changed in the last 12 years, taxes continue to go higher and higher and higher on people's home and their businesses. And that finally, that message finally got through to everyone, that we needed to take action. So I was very pleased when everyone came on board with that issue. Same thing with teacher pay. Teachers need to be paid more and while the House didn't agree on an across the board raise, we settled on, on average a $4,200 raise with a lot of incentives on top of that."

Goudeau: Property tax relief has been your goal since you got here as a Senator. I think I read somewhere you said you weren't sure it was going to happen.

"Yeah, when it happened the other night, when we signed the deal, somewhere around 11 o'clock at night, the three of us shook hands in the Governor's office, nailing down the last few pieces of the legislation, I was a little overwhelmed by it," said Patrick. "Because I don't know that, I don't know that when I came in here, all of this would happen in a relatively short time. I mean it seems like a long time, but 12 years, six sessions until this session, this is the seventh, to accomplish this goal with all the push back we had, my goodness. Not from the people, but from the establishment. The cities and the counties and the school districts. So I want your viewers to really understand what's coming their way. It's thousands upon thousands of dollars over the lifetime of living in their home that they're going to save. This year alone, or the first year it implements as we go to the next year, it's estimated it will be close to a billion dollars in savings. That's a billion dollars, across the state, going into the pockets of homeowners and people who own business property. Right now a lot of people in Austin or your viewing area know that their property appraisals and taxes have been going up 7, 8, 9 percent a year. We're now going to cap that, it can only go up three and a half percent on your cities and counties. That's a dramatic savings going forward. And if the local governments, cities or counties say they need more or want more, the people have an automatic vote. So it's up to the people to raise their own taxes."

Goudeau: Any final thoughts for the people of Central Texas?

"I hope the one thing they will come away with and say is the Speaker, Governor and Lieutenant Governor kept their word and the members worked hard as a team, Republicans and Democrats, conservatives and liberals and moderates together to try to make our schools better, our taxes lower, and make Texas a better place," said Patrick.