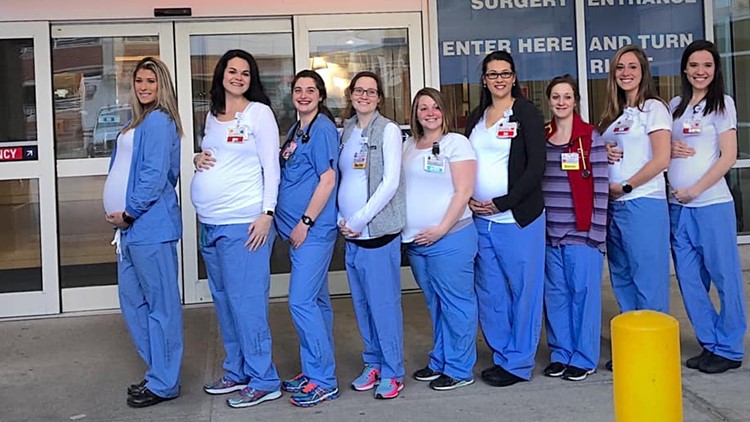 Stork makes its way to ANOTHER unit at Maine Medical Center

Not to be outdone by the Delivery Unit, workers in the Emergency Department go public with news that 12 members of their staff are expecting.
Author: Chelsea Bard (NEWS CENTER Maine)
Published: 6:13 AM CDT April 3, 2019
Updated: 6:24 AM CDT April 3, 2019

PORTLAND, Maine — It's amazing to learn of almost an entire medical unit being pregnant at the same time. But apparently, one unit isn't enough!

This comes only days after the Delivery Unit at Maine Med. announced they have 9 nurses that are expecting.

According to the Portland Press Herald, Melanie Ann Smithgall, who works as a registered nurse in the Portland hospital’s ER Department, posted a photograph last week on her Facebook page that shows nine pregnant co-workers. The photograph was missing three other workers, two pregnant nurses and one expecting father who also works as a nurse.

Smithgall said the 12 due dates range between April and October. “Don’t drink the water in the ER at Maine Medical Center,” Smithgall warned in her Facebook post.

Spokesman Matt Wickenheiser spoke to the Portland Press Herald and said Maine Medical Center employs nearly 8,700 people. He said the probability of a baby boom occurring from time to time, especially with a workforce that large, is not surprising.