The Texas Commission on Environmental Quality suggests testing reservoirs, like Lady Bird Lake, four times per year, but does not require it. 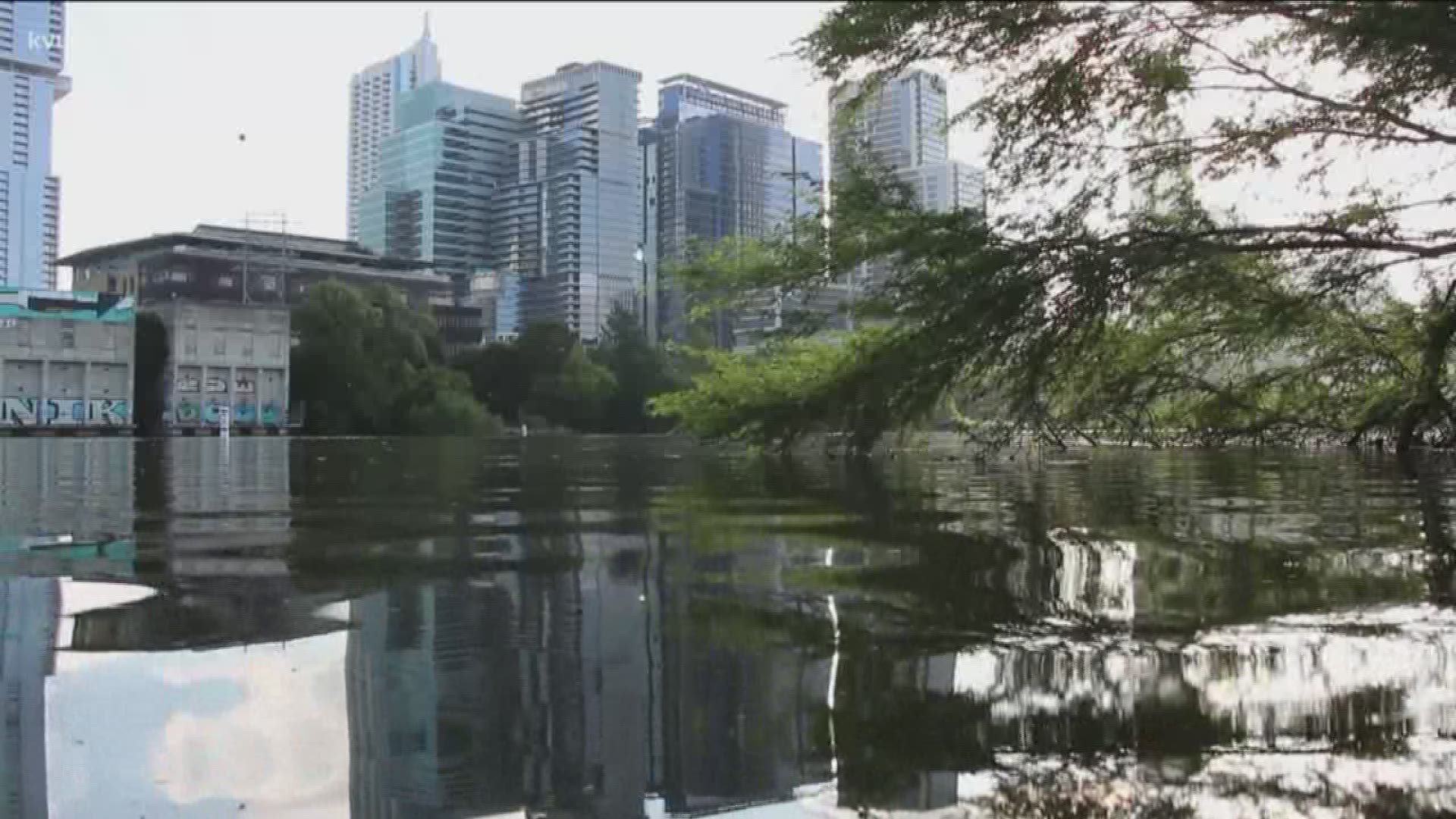 AUSTIN, Texas — One day after City of Austin crews found more toxic algae in local waterways, signs are still posted around Lady Bird Lake warning people to keep their dogs out of the water.

“On a good day, you’ll have probably like 20, 30 dogs just kind of running around playing, and dogs will just be kind of jumping off this ledge,” Austin resident David Morin said.

Morin has been taking his dog, Gus, to Lady Bird Lake for years, including one trip about two weeks ago. But when they got home, something was wrong.

“His front legs gave out,” Morin said. “And I thought, well, maybe something happened with his paw. I picked him up, brought him upstairs, and then he started kind of convulsing and I knew, OK, something’s going on.”

David carried his dog to the car and rushed to an emergency clinic. But by the time he got there, his dog had already died.

News of stories like David’s spread fast. Headlines here in Austin and across the country told the same story: people said their dogs died after swimming in a lake with algae in it.

“We shouldn’t have to worry about getting sick for ourselves or family members or a pet,” Environment Texas Executive Director Luke Metzger said.

Metzger analyzes and reports on water testing in his role with Environment Texas. Their report from last year analyzes water testing data from the Texas Commission on Environmental Quality. Local governments, like the City of Austin, submit water quality test results to TCEQ.

'They take over and completely change an ecosystem': Austin environmentalist working to fight zebra mussels

But the state doesn’t actually require any water quality tests for a lot of waterways, including Lady Bird Lake, where thousands of people and pets come in contact with the water every month.

“No, that’s absurd,” Metzger said. “And for there to be absolutely no requirements is just unacceptable in this day and age.”

TCEQ officials refused to speak with the KVUE Defenders on camera, but agency officials said in an email there are no requirements “to conserve public funds” and “provide flexibility” for local governments.

“Due to limited resources available to support monitoring efforts, and the need to cover the entirety of the state, quarterly sampling is sufficient to determine a baseline of water quality in most areas,” a TCEQ spokesperson said in the email.

“Testing should be required, we need far more testing than we have right now, and that data needs to be accessible to the public,” Metzger said.

The state does have some requirements for water testing.

Beaches are tested once a week during the summer, and once every other week the rest of the year. You can easily find those bacterial levels online.

Even streams need testing at least twice per year. But TCEQ has no set requirements for reservoirs, like Lady Bird Lake. The agency suggests four times per year.

Officials with the City of Austin said their crews test the water nine times per year, but those results aren’t easy to find on the City’s website. People need to search "water quality" on the city's data portal, then interpret a spreadsheet of test results.

“You know, it does sound pretty low,” Morin said of the water testing frequency at Lady Bird Lake. “It really does.”

Even though people aren’t allowed to swim in Lady Bird Lake, they are still on the water every day.

As Morin thinks back to the day he was at the water with his dog Gus, he’s frustrated someone did not know about the water quality before dogs started dying.

Morin now wants to see more frequent testing, or at least regulations for how often water quality should be checked at Lady Bird Lake.

“You would think that somebody, whether it’s the city, state, somebody would be saying, ‘Hey, guys, are we making sure this water is safe for use?’” Morin said.

Travis County crews test the water at Hamilton Pool Preserve, which is another Austin waterway that a lot of people use. A representative from the county said they test that water at least once per week, compared to nine times a year at Lady Bird Lake.

If you have a story idea for the Defenders, email us defenders@kvue.com.