The spike in hate incidents against Asian Americans and Pacific Islanders is alarming, but many locals are taking a stand. 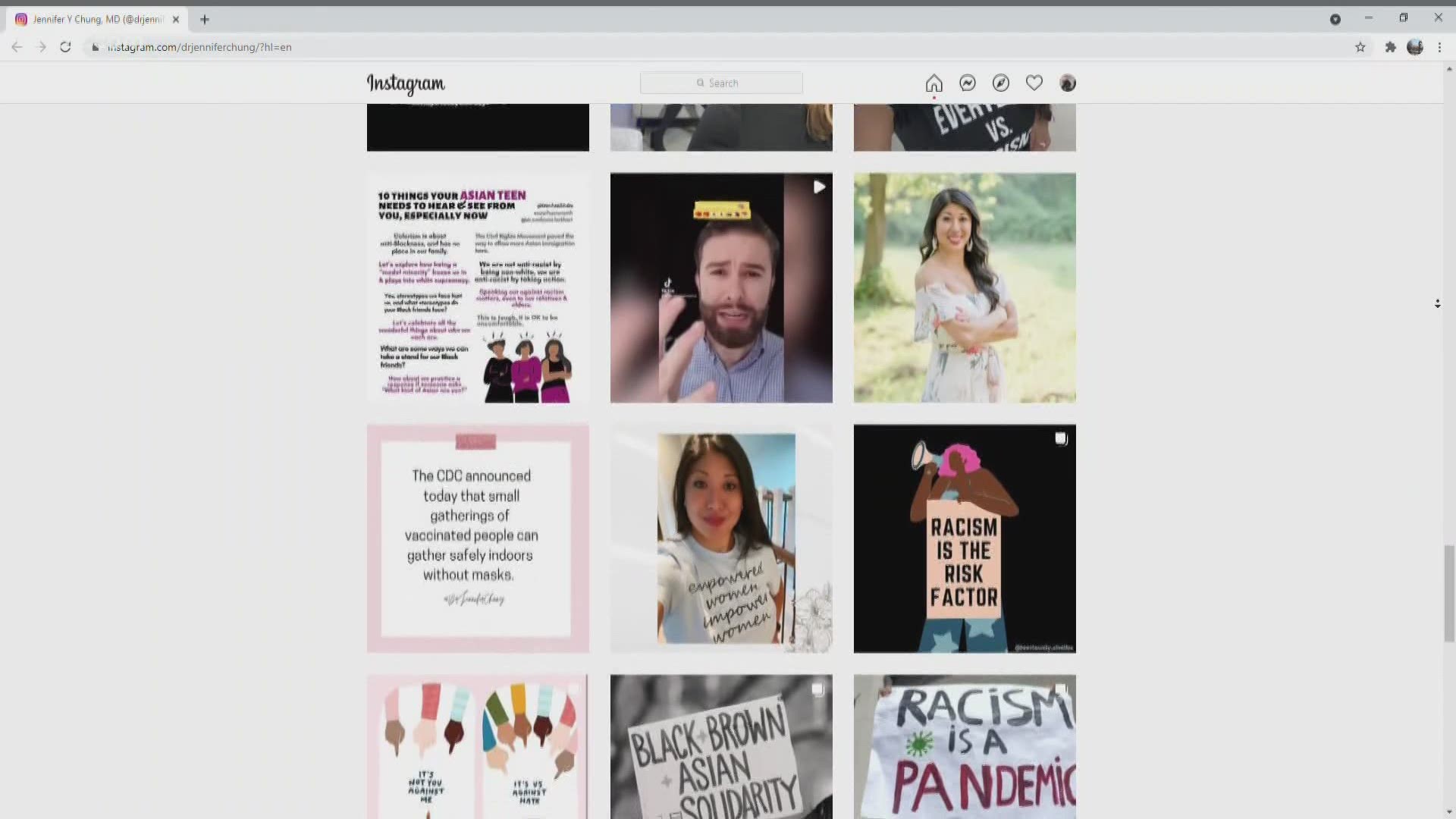 AUSTIN, Texas — Editor's note: This story is part of a three-part series airing this week. For part one, click here. For part two, click here.

The spike in hate incidents against Asian Americans and Pacific Islanders (AAPIs) is alarming but not surprising for some. They've now sparked movements across the country fighting to stop Asian hate on different fronts.

In our final series honoring AAPI Heritage Month, KVUE'S Jenni Lee takes a look at the efforts by Austin AAPI's as well as others across the country.

RELATED: Racism against AAPIs in Austin is nothing new. Here's some history

Since the pandemic, Dr. Thuy Ho-Ellsworth, an ankle and foot surgeon in Austin, has experienced her share of racism, just like she did growing up.

"My first experience in the U.S. with racism when I – first day of school – was slapped across the face by another student, knowing that I wasn't able to relay, you know, the events, because of my language barrier," Dr. Ho-Ellsworth recalled.

These days, watching one hate crime after another against the AAPI community is too much.

So in February, she joined an online initiative called #healthcareworkers4asianlives. She wanted to raise awareness of racial incidents happening to healthcare workers.

RELATED: A look at historical Austin contributions by Asian Americans and Pacific Islanders

"But it is happening every day, something as simple as, you know, people asking me if I speak English, or that I understand English or they're surprised at how good my English is. I think things like that really just show how prevalent racism is in our society," Dr. Ho-Ellsworth said.

"We were seeing the murders and the killings of some of the older Asian population in the Bay Area, was when I was really just so horrified at just the violence," Dr. Chung said.

But Dr. Chung morphed the campaign into something else because she saw another need: to unify the AAPI and Black communities. She now partners with the creator of #EverybodyvsRacism, Dr. Gerald Onuoha, to discuss solidarity and how to move forward. They hold live Instagram talks regularly.

"We need to understand the history on both sides and why we've become communities pit against each other," Dr. Chung said.

In the meantime, Austinite and businesswoman Ying McGuire is saying "enough."

"We no longer want to fear being stabbed from behind fatally knocked to the ground," McGuire read.

Credit: Ying McGuire
Austinite and businesswoman Ying McGuire signed a letter called "Enough," which was sent to The Wall Street Journal asking the world to end discrimination and violence against the Asian community.

It's part of a letter she signed titled, "Enough," which ran in The Wall Street Journal in March.

"We ask that you join us in ending discrimination and violence against the Asian community," McGuire continued reading.

McGuire is one of the thousands of AAPIs in business and information technology who signed it.

"And in that letter, we collectively pledged $10 million over the next year and four specific organizations for specific outcomes," McGuire said.

Justin Zhu is one of the authors of that letter. He is the former CEO of Iterable, a $2 billion marketing company out of San Francisco.

"We've had enough, we're tired, we're angry, our friends and family and community are scared and we need to stand up," Zhu said.

Credit: Justin Zhu
Justin Zhu is one the authors of a letter that ran in The Wall Street Journal asking for unification against discrimination and violence toward the Asian community.

He helped write it after eight people were murdered in Atlanta, six of them Asian. He expected outrage but was met with silence.

"I think it's sort of like there's a sense of it's not grave enough to be talked about. A second is also just we don't, as an Asian-American community, we don't quite have the muscle to actually talk about it," Zhu said.

His Enough campaign is out to change that. With more than 7,000 signatures on the letter, each pledging a donation, the campaign is off to a good start. Zhu said all the money will go toward Asian non-profits.

The goal is to raise awareness about racism and to empower Asians, something Austin's first civil rights officer plans to do as well.

Johnson said that outreach will include bystander training, teaching what a civil rights violation looks like and what implicit bias is. The office is also setting up a 1-800 number to not only report violations but for residents to also get information. And, finally, Johnson said, her office will come up with a way to track hate incidents. But that will take time – between six to nine months.

"If you can change one person's mentality, you're going to make a difference," she said.

The doctor continues to share her stories of discrimination online.

"I felt like I needed to speak out," she said, hoping to educate one person at a time.

RELATED: COMMENTARY: 'I'm scared for the future of my 11-year-old son' | KVUE's Jenni Lee opens up about anti-Asian American violence