Leaving the White House for a trip to New Orleans, Trump said he had dismissed the proposal from Republican Sen. Lindsey Graham to reopen for several weeks and continue dealing with Democrats over Trump's long-promised wall on the U.S.-Mexico border. 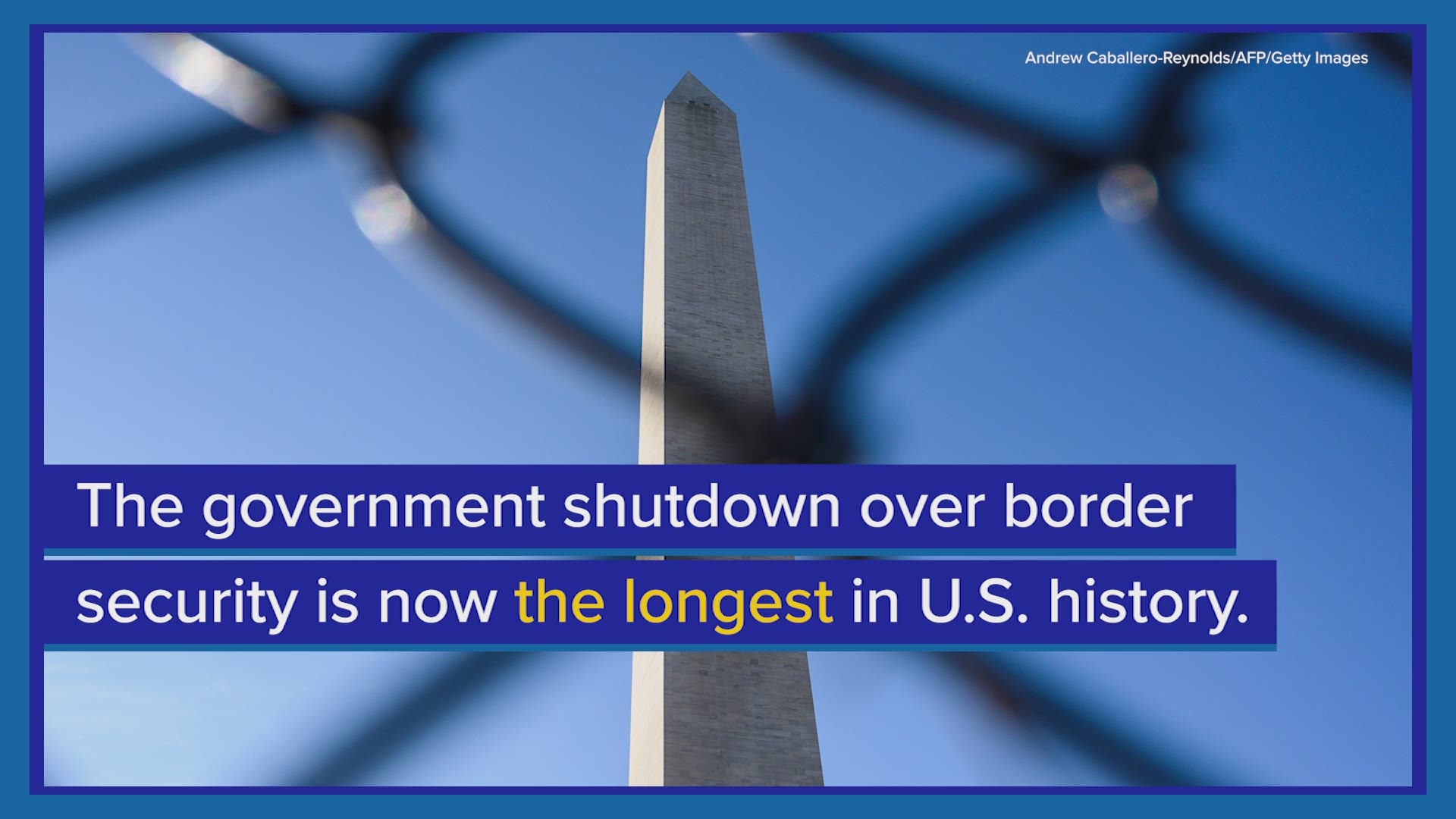 WASHINGTON — President Donald Trump on Monday rejected the suggestion that he temporarily reopen government while negotiations continue on his proposed border wall, signaling no speedy resolution to the partial government shutdown now into a fourth week.

Leaving the White House for a trip to New Orleans, Trump said he had dismissed the proposal from Republican Sen. Lindsey Graham to reopen for several weeks and continue dealing with Democrats over Trump's long-promised wall on the U.S.-Mexico border.

As Congress returned to Washington for their second week of legislative business since House control reverted to Democrats, the shutdown hit Day 24, affecting federal workers and services with no end in sight. Trump has demanded $5.7 billion for his long-promised wall, while Democrats, who oppose the wall as both immoral and wasteful, insist Trump re-open the government before they negotiate border security.

From the White House, Trump argued that he alone was ready to negotiate, noting that a group of House and Senate Democrats were touring hurricane-ravaged Puerto Rico.

"A lot of the Democrats were in Puerto Rico celebrating something. I don't know, maybe they're celebrating the shutdown," Trump said.

Democratic House Speaker Nancy Pelosi and Senate Minority Leader Chuck Schumer were not on the trip to Puerto Rico. Pelosi spokesman Drew Hammill tweeted Monday: "Speaker Pelosi has been in DC all weekend working from the Capitol."

Trump also targeted Pelosi and Schumer on Twitter, arguing that the shutdown "has become their, and the Democrats, fault!" But Trump weeks ago asserted that he would "own" the shutdown and polls show that he is taking most of the blame.

Trump has kept Washington on edge over whether he would resort to an emergency declaration, citing what he says is a "crisis" of drug smuggling and the trafficking of women and children at the border. The president initially sounded as though such a move was imminent, but then pulled back. He has said several times since he first mentioned the idea in public this month that he prefers a legislative solution.

A key question is how much more time is Trump willing to give lawmakers. Graham, who spoke with Trump by telephone on Sunday morning, said the legislative path "is just about shut off" and blamed intransigence by Pelosi.

Democrats oppose an emergency declaration but may be powerless to block it. Some Republicans are wary, too, fearing how a future Democratic president might use that authority. Such a move, should Trump ultimately go that route, would almost certainly be challenged in the courts.

"I do think if we reopen the government, if the president ends this shutdown crisis, we have folks who can negotiate a responsible, modern investment in technology that will actually make us safer," Coons said.

Trump says technology is nice, but that the border can't be secured without a wall.

The White House has been laying the groundwork for an emergency declaration, which is feared by lawmakers in both parties.

Senate Homeland Security Committee Chairman Ron Johnson, R-Wis., said he'd "hate to see" a declaration issued because the wall wouldn't get built, presumably because of legal challenges. Democrats voted in the past for border security and should again, he said.

"I actually want to see this wall get built," Johnson said. "I want to keep pressure on Democrats to actually come to the negotiating table in good faith and fund what they have supported in the past."

Graham favors a declaration and said the time for talk is running out.

"It's the last option, not the first option, but we're pretty close to that being the only option," he said.

Graham and Coons spoke on "Fox News Sunday" and Johnson appeared on CNN's "State of the Union."