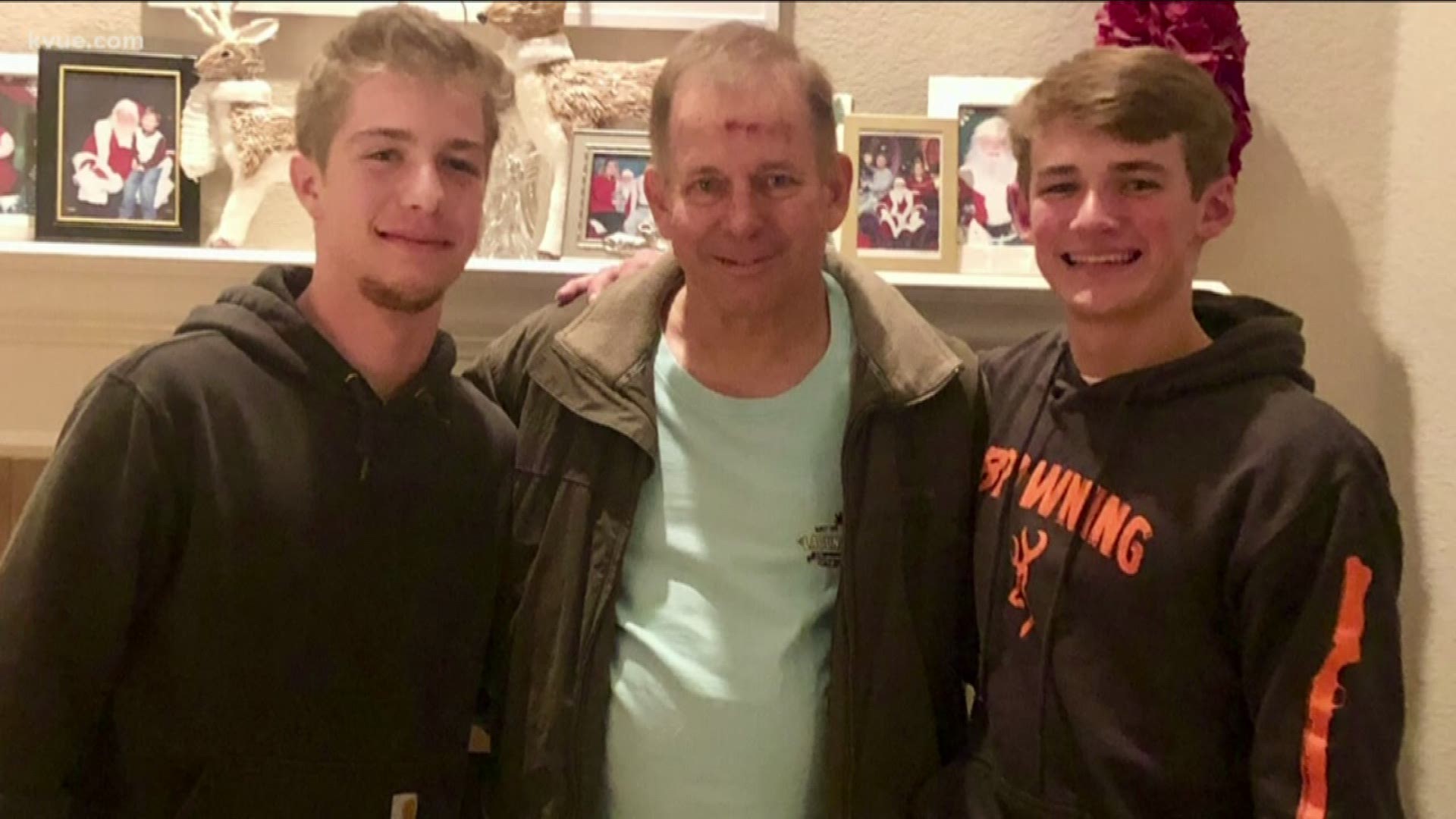 ROUND ROCK, Texas — Two Round Rock High School juniors are now being called "heroes" by their classmates and community after jumping into action to perform life-saving CPR on a man who collapsed while jogging after suffering a heart attack.

On January 21, students Tyler Ludemann and Nick Goodrem had the day off from school for Martin Luther King Jr. Day, so the two friends decided to go mudding.

As they were washing the truck after a day of fun, a man started running toward them, yelling for help.

"We thought [we] were in trouble at first," Ludemann said.

The man, Joe Ondrejik, told the two boys someone had collapsed on the trail near their home and needed help immediately. He had been walking his dogs with his wife when a jogger fell in front of them, suffering a heart attack.

As his wife checked the jogger's pulse, Ondrejik called police and ran for help nearby, finding Ludemann and Goodrem.

The two boys jumped into action.

"When we first ran over there, he had no pulse. Came, back then it went away and came back again," Ludemann said.

He began to do compressions.

"He took like a deep breath of air, so I stopped for a second. I thought he came back -- he still wasn't conscious."

As Ludemann performed CPR, Goodrem took over the emergency phone call and was able to get emergency crews to their location on the trail.

Only seven minutes passed between the time they were first flagged down for help until emergency crews arrived on scene.

In addition to EMS, Round Rock Police and fire crews also arrived on scene to relieve the boys and safely transport the man to the hospital.

The boys said, at the time, they didn't know the man they were helping, but that didn't matter: time did.

Their heroic actions were awarded by the Round Rock Fire Department, who presented them with a Challenge Coin for what they did.

Ondrejik said it was fate that he found the two boys when the jogger collapsed in front of him and his wife. He said that he had just been recovering from a kidney infection and a blood clot, but was tired of sitting around and needed to get out, which prompted him and his wife to go out for a walk.

"These kids were there, and it all just worked out. So, someone was watching out for him," Ondrejik said. "We're adults, we're supposed to help when we can, right? But the key thing was, there's so many high school kids that boast about how big and bad they are and then when something bad happens, they kinda shrink. These guys didn't shrink. They kept going. They went right to where the problem was and helped. They acted, and that made the difference."

The boys learned the life-saving technique at school. It's required to take a course on it in order to get a parking pass on campus.

As the boys now realize, it's worth so much more.

"We never thought we'd need to use it, but now we're really glad that we did to it because it really helped," Ludemann said.

"It's not about being CPR certified, it's knowing how to do it," Goodrem said. "You never know when you're going to need to do it, you never know."

The man the two boys helped save was hospitalized from Monday until Saturday. He is Christopher Byers: a husband, father and fellow Round Rock community member.

Like the boys, Byers also had the day off from work.

He said he had been on a regimen of exercising five to six times a week.

As he was wrapping up his workout, he collapsed on the hike and bike trail nearby, less than a quarter-mile away from his house.

Byers said he's never been one to over exert himself, and still doesn't know why it happened. Nothing like this had ever happened to him before.

"Even the doctors didn't really have a clear indicator as to why it happened," Byers said.

He woke up a few days after the heart attack at St. David's Round Rock Medical Center. His family and doctors told him about the two boys that helped save his life.

"It is just amazing, since that time for all the things that had to go right for me to be here today. People had to see me. I'm on a trail where sometimes you don't see anybody," Byers said. "It makes me us so glad that we chose to come to Round Rock, and I know that all of Texas is like that, but this is just such a great community that we have here. It just validates it all."

Byers shared he's feeling better now. He had to have an ICD (implantable cardioverter defibrillator) implanted and is taking things easy.

He said he hasn't been able to stop saying "thank you" to the great staff at St. David's, to the couple walking on the trail that day and to the teens who helped save his life.

"You gave me the most wonderful gift, you gave me my life back. Every day I have with my daughters, my son, my wife, my friends, I owe it all to them."

Byers and the two boys finally had the chance to formally meet earlier this week. They said there's a fishing trip in the works for Byers' family and the teens to go on together.

"This is probably a life-long bond with those guys."