This year's anniversary was especially poignant in Atlanta on Thursday following the death of Rep. John Lewis last month. 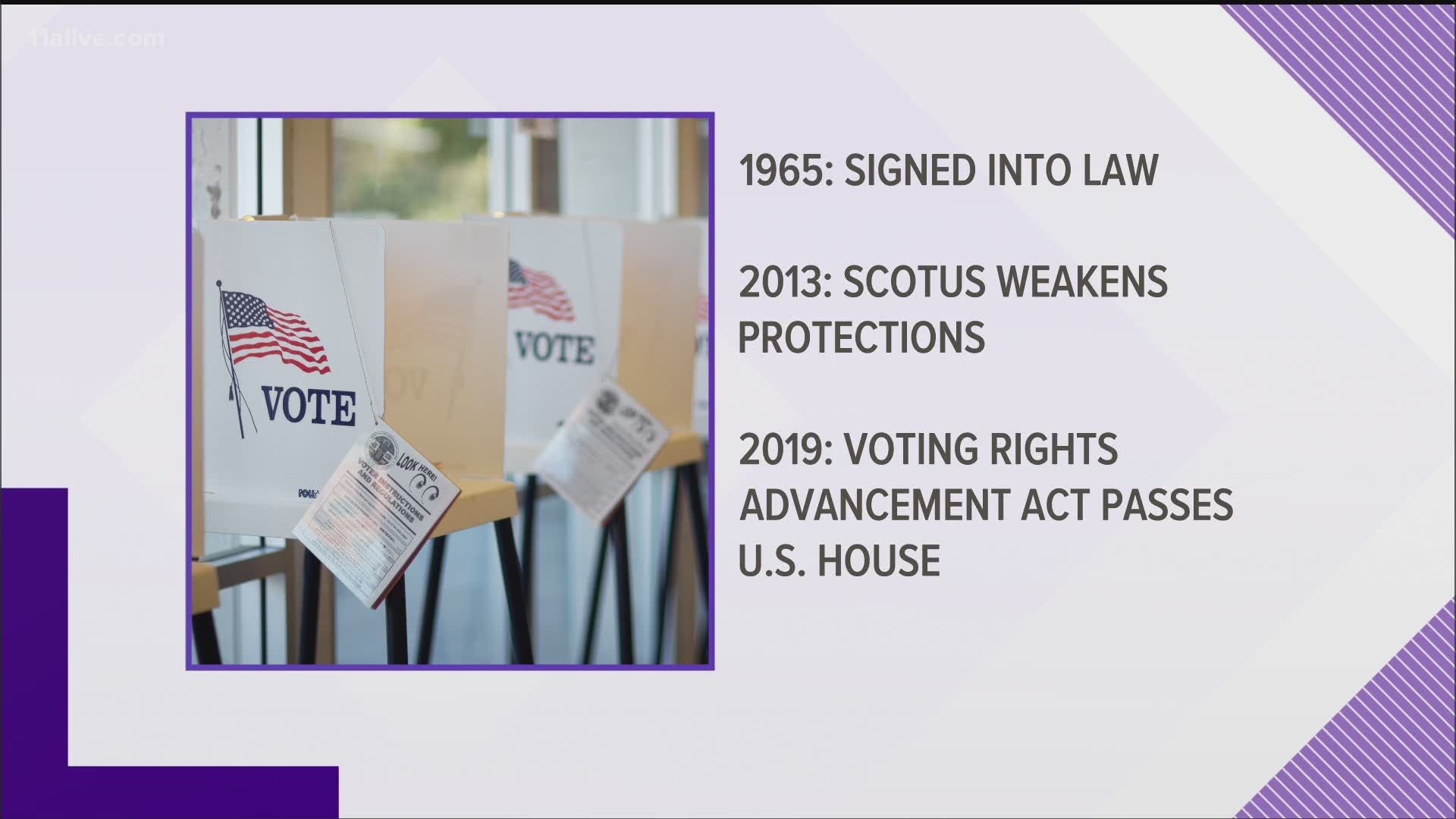 ATLANTA — Georgia and the nation marked an especially poignant 55th anniversary of the Voting Rights Act on Thursday, coming just weeks after the deaths of Civil Rights leaders whose determination and sacrifices helped see the landmark law realized.

The anniversary of the Aug. 6, 1965 signing of the law by President Lyndon B. Johnson arrived in the wake of recent tributes to Rep. John Lewis and Rev. C.T. Vivian.

The pair of Civil Rights icons died on the same day in July. They were both leading figures at the "Bloody Sunday" march across the Edmund Pettis Bridge in Selma, Ala., on March 7, 1965 which, among a generation of protests and activism, helped spur action on the landmark law passed later that year.

Growing calls to restore the Voting Rights Act, a goal Democratic lawmakers have prioritized since a 2013 Supreme Court decision invalidated two of its provisions as outdated, were amplified on the anniversary.

"55 years ago today, after the committed, courageous work and direct action of activists and advocates, President Lyndon B. Johnson signed the landmark Voting Rights Act of 1965 into law," the Martin Luther King, Jr. Center tweeted. "Today, the VRA is challenged and in danger. We MUST restore and expand the VRA."

Dr. Bernice King, the CEO of the King Center and daughter of Martin Luther King, Jr., posted a picture of herself on Twitter with Amelia Boynton Robinson, a principal planner of the "Bloody Sunday" march.

"She was critical to the success of the voting rights campaign that preceded the marches from Selma to Montgomery. Black women powered the movement. Where would we be without their courage and brilliance? #VotingRightsAct," she wrote.

Former President Barack Obama wrote at length on Twitter about the act - as he also spoke passionately about it last week during Lewis' funeral services in Atlanta - calling it "one of the crowning achievements of our democracy."

"But once the Supreme Court weakened it, some state legislatures unleashed a flood of laws designed specifically to make voting harder, especially in communities of color," the 44th president added. "We've got to fight harder to protect the right to vote. It’s one of the most powerful tools we have––and we can start by passing the John Lewis Voting Rights Act. Once we pass that, we should continue marching forward to make it even better."

A number of Georgia lawmakers also commemorated the act's anniversary, among them Rep. Sanford Bishop, now the senior member of the state's delegation after Lewis' passing.

"As we celebrate 55 yrs of the #VRA, our work to ensure access to the ballot isn’t over. Inaccessibility w/ vote-by-mail systems & polling places persist nationwide," Bishop wrote on Twitter. "It’s important for states to give voters a clear range of options so that eligible voters aren’t disenfranchised."

As we celebrate 55 yrs of the #VRA, our work to ensure access to the ballot isn’t over. Inaccessibility w/ vote-by-mail systems & polling places persist nationwide. It’s important for states to give voters a clear range of options so that eligible voters aren’t disenfranchised. pic.twitter.com/b74Yzd2zlQ

Rep. Lucy McBath posted a video to Twitter. "Today on the 55th anniversary of the Voting Rights Act we reaffirm our dedication to ensure that all Americans have access to the ballot box," she said in part. Rep. David Scott wrote: "Every vote MATTERS. 55 years ago, President Lyndon B. Johnson signed the #VotingRightsAct to remind us of our nation’s core values. Our fight continues today."

We must each commit to the VRA's legacy to ensure that all Americans have access to the ballot box.#VotingAccessSavesLives #ProtectOurVote pic.twitter.com/U8zPtLz8Cf

Rep. Hank Johnson planned a live-tweeting event for a viewing of the documentary on Lewis' life, "John Lewis: Good Trouble" for 8 p.m. ET.

Join me in celebrating the life of Rep. John Lewis and the 55th anniversary of the Voting Rights Act with a Live Tweet Event of John Lewis: Good Trouble at 8pm ET on 8/5. Tweet using #GoodTrouble and watch the film here:https://t.co/H9qQCY9lWx