Cornyn has been a U.S. senator for Texas for the better part of two decades. 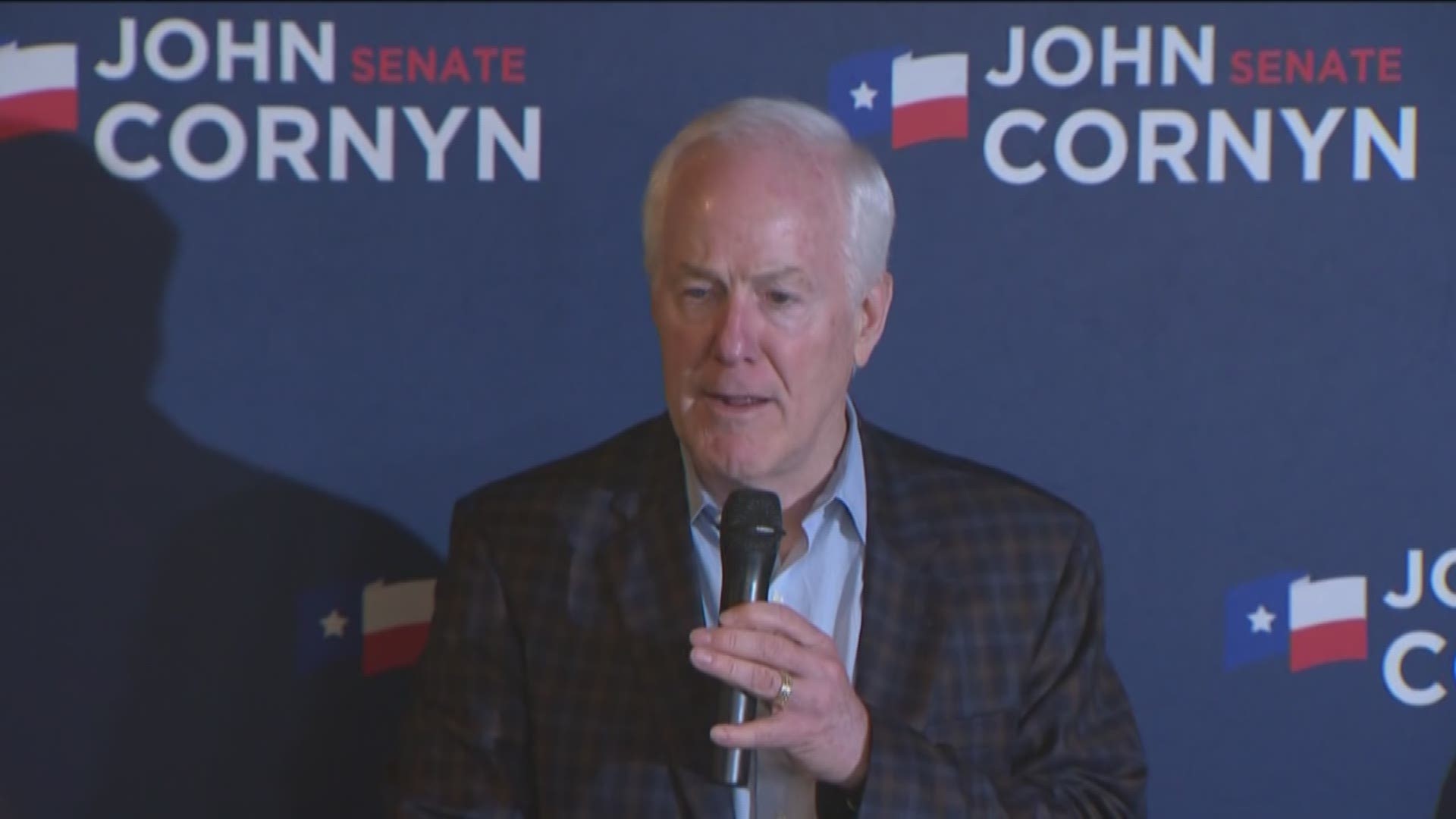 It’s an honor to be here with you tonight.

I want to thank my good friend, Matt Mackowiak, and the Travis County Republican Party for hosting us. And County Line BBQ for serving up some of Texas’ finest brisket and ribs.

What a night this is!

I am so happy to share this moment with my wife Sandy, who has been by my side since the first time I ran for district judge in San Antonio.

I also want to thank all of our supporters across Texas tonight for nominating me to be your Republican candidate for U.S. Senate for a fourth time.

We have put together an incredible grassroots machine that helped propel us to victory tonight. We are united as one party and on we go to the general election.

The stage is now set for the greatest referendum of our lifetimes:

Will Texans abandon the principles that have made our state the envy of the nation in order to live under the stranglehold of socialism?

Or will Texans choose freedom, prosperity and the power of self-determination.

With those choices before us, it seems to me that this election is not merely a race between political parties … but, rather, a race for who we are as a state, and a country.

I am honored to serve in Sam Houston’s Senate seat.

Sam Houston who, mind you, actually knew a thing or two about revolutions.

And whatever hat we wear, we often find that – despite our differences – we are united by our core values: Faith. Family. Freedom.

These are not just the tenants that have made Texas and our nation successful.

They are what have guided me as I’ve served as your United States Senator.

I’ve fought hard for you –

And thanks to your vote, I get to keep on fighting.

As we move now into the general election, we will cede no voter and no region of Texas.

Like I’ve done in the Senate, I will reach across the aisle … welcoming Texans caught in the Democrat Party’s civil war and repelled by socialism, to join our efforts.

And we’re going to unite to ensure Republicans win from the White House to the courthouse. Starting first with the reelection of our president, Donald J. Trump!

We are making our choice tonight. We chose Texas … and we’re going to fight to keep her exactly how she is.

Thank you all for coming out. Let’s keep up this momentum … and let’s win in November!

God bless you all, and God bless this great State of Texas."

Cornyn started his political career in the early ’80s, serving as a state district judge in Bexar County for six years before being elected to the Texas Supreme Court in 1990 and again in 1996. After resigning from the Texas Supreme Court, he ran for attorney general of Texas. During his time as attorney general, he created and backed the Texas Exile program, which increases penalties for criminal gun use by convicted felons, and the Texas Internet Bureau, which targets child predators and human traffickers.

Cornyn was first elected to the U.S. Senate in 2002. He was elected for a second term in 2008, continuing to serve on the Budget, Finance and Judiciary committees. In 2014, he was elected to a third term and chosen by his peers to serve as the majority whip.

According to Cornyn’s official website, he is a strong supporter of agriculture, an advocate for lowering prescription drug costs and he has supported expanding aid for low-income students. One of his recent bills, the “Fix NICS (National Instant Criminal Background Check System) Act” aims to better prevent criminals and domestic abusers from obtaining firearms. Cornyn has also “supported efforts to encourage conservation while increasing the responsible production of our domestic sources of fossil fuels and exploring alternative sources to make our nation more energy secure,” according to his website. For more information about Cornyn's stances on a variety of political issues, visit his website.

On Nov. 3, Cornyn will face the Texas Democratic nominee in the hopes of retaining his U.S. Senate seat.