President Trump leads Joe Biden by 5 points in the race for president in Texas, but voters give him mixed grades on his handling of the pandemic and economy. 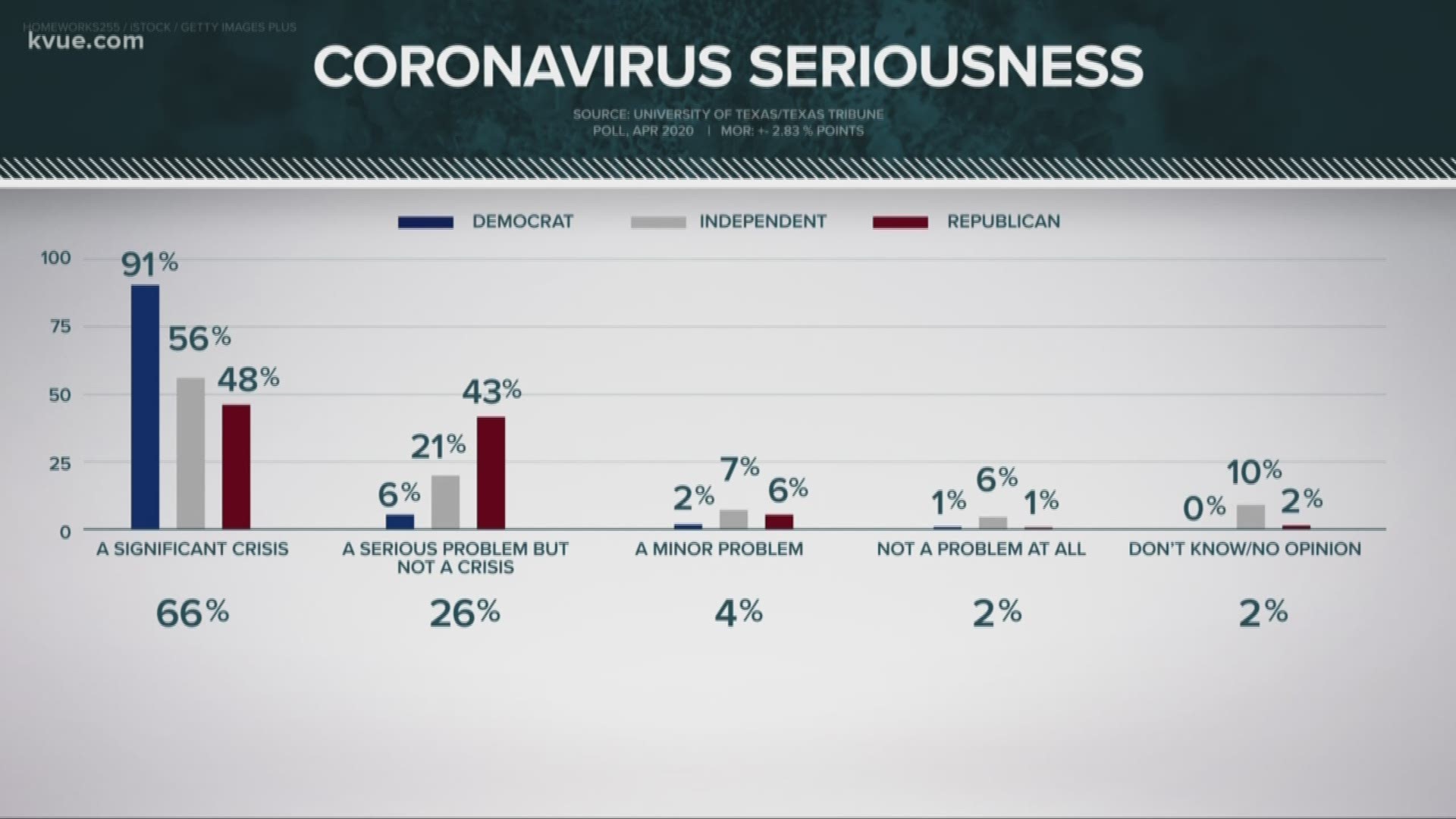 TEXAS TRIBUNE – Donald Trump would beat Joe Biden 49%-44% in Texas if the presidential race were held now, according to the latest University of Texas/Texas Tribune Poll.

In the Trump-Biden contest, Democratic and Republican voters overwhelmingly back their own party’s candidate. But independent voters are on the fence, with 39% favoring Trump, 29% favoring Biden and 32% saying they haven’t formed an opinion.

Trump has a harder race against himself. Ask Texans whether they would vote today to reelect the president and, as they have done in four previous UT/TT polls, they split down the middle: 50% say they would vote for him, 49% said they’d vote against him. Among Republican voters, 81% say they would definitely vote for Trump, and another 11% say they probably would. Democratic voters are just the opposite, with 85% definitely planning to vote for someone else, and 9% probably planning to. Most independent voters — 61% — would vote for someone else, while 39% say they’d vote for the president.

It’s only when you add Biden to the mix that Trump pulls ahead. “When you put a flesh-and-blood opponent against them, they do better,” said Daron Shaw, co-director of the poll and a government professor at the University of Texas at Austin.

“The reality nationally is that, for the first time in a long time, the incumbent isn’t going to be able to make it a comparison,” he said. “It’s going to be a referendum election about how the president is doing. First of all, it’s Trump, Trump, Trump all the time. And all the news is about coronavirus.”

RELATED: Most Texas voters think coronavirus will be contained 'in the next few months,' UT/TT Poll finds

In a slight shift from the February UT/TT Poll, Texas voters were more likely to say Trump is doing a good job. Overall, 49% say they approve strongly (36%) or somewhat (13%) of the job he’s doing, while 45% say they disapprove, including 39% who disapprove strongly. In the February survey, 45% of voters gave the president a good report card while 48% gave him a bad one.

The partisans barely overlap on Trump’s performance, with 90% of Republicans saying they approve of the job he’s doing and 87% of Democrats saying they disapprove.

Voters: Trump is doing OK on the pandemic and economy, but Abbott’s better

Trump’s handling of the economy gets approving marks from 49% of the state’s registered voters, including 89% of Republicans. Another 42% — a group that includes 82% of Democrats — disapprove.

Voters give him similar grades on his response to the pandemic. While 48% approve, 45% disapprove. The first group includes 86% of Republicans, and the second includes 84% of Democrats.

Republican Gov. Greg Abbott’s report card is much stronger, and he also gets good marks from some of the Democrats who are dissatisfied with the president.

A majority — 56% — approve of Abbott’s response to the coronavirus outbreak, while 29% disapprove. Most of the Democrats, 51%, disapprove. But 30% of Democrats, along with 86% of Republicans, give the governor good marks.

“Democrats as a group aren’t suddenly swinging over to Abbott, but you look at his support among Democrats versus Trump’s, and it’s clear that Abbott is peeling off some support from Democrats,” said James Henson, co-director of the poll and head of the Texas Politics Project at UT-Austin. “He’s won some of them over.

“The approach he was criticized for by some on his right flank won him support not only from a lot of Republicans, but also among Democrats.”

Most voters, 56%, say national efforts to deal with the pandemic are going “very” or “somewhat” well. They’re more positive about what’s going on in Texas: 66% say that’s going well.

The state gets better ratings on specifics of its response: providing people with clear information, preventing the spread of the virus, making sure health care workers have necessary equipment and working with local officials. More than half of the voters gave the state approving marks on all of those points, falling just short of a majority on the state’s efforts to reduce economic harm.

“The vast majority of Texans do perceive the virus as a threat, but they’re still partisan human beings, many of them, with competing concerns, perceptions of threat, perceptions of their own safety and security,” Henson said.

“If you’re a political leader, this unambiguously shows you that you will find a vast majority of Texans supporting your action if they believe your action is necessary to halt the spread of the virus.”

Governments aren’t at the front of the line for praise for responses to the pandemic. Health care professionals have the approval of 83% of voters. Local governments get good grades from 64%, followed by state government (57%), the federal government (49%), the news media (34%) and insurance companies (27%).

Most of the state’s voters think the Texas government is a good model for other states to follow. But that 58% approval hides the partisan numbers below: 89% of Republicans agree that Texas is a good model, but 56% of Democrats, who hold none of the statewide offices and who are in the legislative minority, are on the other side.

The state’s two Republican U.S. senators do better than Congress, at least in Texas. John Cornyn is doing a good job, according to 38% of the voters, and a bad one, according to 36%. Ted Cruz, with 45%, is winning the favor of more voters. Fewer than that, 39%, disapprove of the work he’s doing. Those numbers are largely unchanged from previous surveys.

“There’s just not much going on at all beneath the presidential level in politics,” Henson said. “That’s what you see in the Cruz and Cornyn numbers. They’re static.”

Abbott is in better shape than the president or either of the state’s senators, with 56% percent approving of the job he’s doing and only 32% disapproving. That’s an improvement over the February poll, when 48% approved of Abbott’s performance. More than half of the Democratic voters disapprove of the job the governor is doing, but 24% say they approve.

Lt. Gov. Dan Patrick gets good marks from 40% of voters and bad marks from 36% — numbers that are similar to what voters have said in previous UT/TT polls.

“Patrick’s numbers haven’t moved very much, but there has been a big uptick of disapproval in two groups, particularly from independents,” Blank said. “The other key group was registered voters over 65.”

Between the last UT/TT Poll in February and now, Patrick made national news when he suggested “as a senior citizen” that saving the economy was more important than responding to the coronavirus.

In the February UT/TT Poll, 29% of voters over 65 disapproved of the job the lieutenant governor was doing; now, it’s 37%, up 8 points. Among independent voters, the swing was even larger, from 30% disapproval in February to 43% in the April survey.

Speakers of the Texas House are generally less well known to the general public, and Dennis Bonnen’s ratings are confirmation: 20% approve and 24% disapprove of the job he’s doing, 28% neither approve nor disapprove, and another 28% didn’t register an opinion. Bonnen isn’t seeking another term in the House and will be replaced as speaker when the Legislature convenes in January 2021.

Dr. Anthony Fauci, one of the nation’s most prominent medical experts on the coronavirus, gets relatively high marks from Texas voters, with 54% saying they have a favorable opinion of him and only 15% saying they have a negative one. That leaves almost a third who have a neutral impression, or none at all, of the immunologist who heads the National Institute of Allergy and Infectious Diseases.

Most of the things the Texas and local governments have done to address the pandemic are favored by strong majorities of registered voters, but not all of them:

Resistance to those responsive measures is relatively light, with notable exceptions for abortion and criminal justice, two issues that were separating partisans long before the pandemic began. There and elsewhere in this survey, the pollsters found a public willing to accept strong responses to the pandemic.

“To the extent that some people are saying Republicans are beating down the doors of their houses ... there is no evidence of that in this poll,” Henson said. “There’s not evidence of resisting serious measures.”

Coronavirus is the biggest problem facing us, but that’s not unanimous

One third of Texas voters say the coronavirus/COVID-19 is the most important problem facing the country, while 12% say political corruption/leadership is most important and another 10% put the economy at the top of their concerns.

Republican and independent voters were more likely than Democrats to put the economy on the list; 14% of each have that as the most important problem, compared with 4% of Democrats. But both Republicans and Democrats put the pandemic atop their worries for the country.

The pandemic also topped the list of most important problems facing the state, at 32%. Nothing else was in the double digits. But Republicans in Texas haven’t abandoned their perennial concerns of border security and immigration, with 28% naming one or the other as the top problem facing the state, while 27% say the virus is the top problem. Among Democrats, 40% chose the coronavirus as the most important problem facing Texas.

Almost half of Texas voters agree with the statement, “Undocumented immigrants currently living in the United States should be deported immediately.” That 49% agreement and 43% disagreement tracks closely with the last several UT/TT Polls. And the partisan differences are similar to those on legal immigration: 75% of Republicans agree with immediate deportation, while 46% of independent voters and 18% of Democrats agree. So do 53% of white voters, 39% of black voters and 38% of Hispanic voters.

The economy has plunged, and so has voters’ assessment of it. Only 21% say the national economy is in better shape than it was a year ago; 64% say things are worse now. In the pre-pandemic poll in February, 48% said things were better than the previous year and only half as many said the economy was worse.

The voters say the same thing, more or less, about the state economy: 22% say it’s better than it was a year ago, and 54% say it’s worse. It’s worth noting that a dramatic drop in oil prices came after the poll was closed.

Asked about economics in their own families, 28% of Texans say they are better off economically than they were a year ago; 34% say their finances are about the same, and 35% say things are worse now.

The University of Texas/Texas Tribune internet survey of 1,200 registered voters was conducted from April 10-19 and has an overall margin of error of +/- 2.83 percentage points. Numbers in charts might not add up to 100% because of rounding.

Disclosure: The University of Texas at Austin has been a financial supporter of The Texas Tribune, a nonprofit, nonpartisan news organization that is funded in part by donations from members, foundations and corporate sponsors. Financial supporters play no role in the Tribune's journalism. Find a complete list of them here.

'The Eyes of Texas' like you've never heard it before: 25 UT percussionists create mini-masterpiece