In a debate hosted by KVUE on Feb. 18, 11 of the 12 Democratic U.S. Senate candidates in Texas responded to a question regarding marijuana legalization. 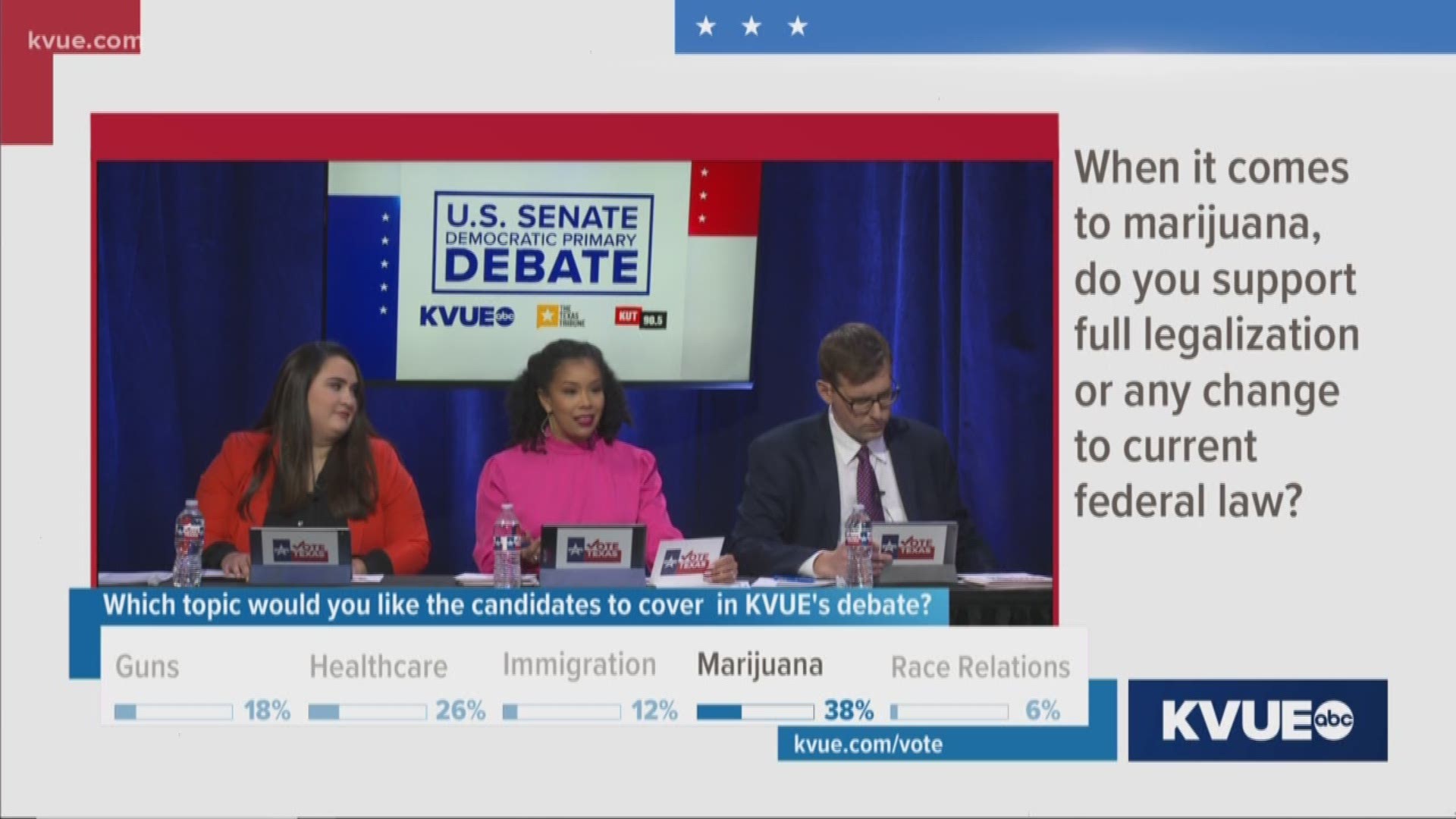 AUSTIN, Texas — On Tuesday, KVUE hosted a debate featuring 11 of the 12 Democratic candidates running to unseat Sen. John Cornyn in the U.S. Senate. Many viewers were interested in the candidates' views on the legalization of marijuana.

Democratic candidate D.R. Hunter did not respond to KVUE's request to debate.

Candidates were given 45 seconds to respond to the question, "When it comes to marijuana, do you support full legalization or any change to current federal law?"

Here are their responses.

"In my economics class, 232, one of the things we discussed and looked at was California. They said, 'Follow what California does and you're going to find out what the rest of the United States is going to do.' So it's legal in California. So when it's legal in Texas, I want to make sure all of the proceeds and money that goes from it goes towards education, rebuilding our infrastructure and also help out so we can expand Medicaid and then Medicare for all our citizens."

"NORML had a marijuana forum a couple of weeks ago and I was the only candidate on this stage to attend because I truly believe that this is key to understanding that if we legalize marijuana, we abate human suffering in three ways. One, medical use of marijuana helps people across the board. Two, we go and we release people in jail – 50% of all drug offenses are for possession of marijuana in this country. And we need to look at how we take the legalization of marijuana and we apply all of that tax revenue that's going to come into our state and our country and how we're going to apply it to social welfare programs such as early childhood and intervention here in Texas."

"I agree with Annie back here that we need to legalize it in this country, and we need to make certain that the tax, the taxes that we place on sales, are used for education. I agree with Mr. Cooper on that, and any other social programs. When you begin to look at the incarceration rate, 47% of all persons that are incarcerated are there because of drug-related offenses. [Garcia] said 50% for marijuana. It makes no sense at all, especially when you're talking about $31,000 ... per year in terms of incarceration and half of the persons incarcerated are there because of drug offenses. We need to make certain that we get those persons out, give them treatment if they need to, but make certain that we have an infrastructure, a legal infrastructure in place, that takes care of the issues concerning marijuana. Marijuana should, in fact, be legalized across this country."

"We declared a war on drugs a long time ago and we lost. And we need to admit that and move forward. During the war on drugs, we decided we would make addicts into criminals and we've done ourselves no favors whatsoever. And of course, I support the legalization of marijuana. Alcohol is legal in this state and in this country, and I'm sure we're going to have to put safeguards in place – and there will be some abuse of marijuana and we will have to deal with that. But meanwhile, it's not going away and it could be an extraordinary cash crop for farmers here in Texas. So yes, I support the legalization of marijuana."

"[I] definitely support that, especially medicinal, especially making it legal across the board through the country so that VA recipients can use it. Right now they can't, because they'll take the benefits away if they're tested. Legalizing across the board as well, throughout the country, for recreational as well – we already have studies from the different states that have had it. There's no big issues, should be no reason. Remove people that are incarcerated because there's no crimes. And I think that's the way we should be going. Like Chris said, you know, alcohol is legal; I don't think marijuana's going to be that much worse and I think the studies from the other states prove that."

"Honestly, not a high priority in my agenda. I'll look at it. I'm sure there are some other implications in terms of how to actually implement it that either deal with agriculture, interstate commerce, those types of things. Not high on my priority list, but I'll meet with whoever wants to forward legalizing it and see what the impacts would be in terms of actually implementing it and what those challenges actually would consist of."

"First of all let me say this – you should be high on life. But that's OK. I'm definitely for legalizing marijuana. I have no problem with that, but you have to respect the city ordinances just so people would not, you know, get carried away with smoking marijuana."

"I just feel like someone has to say, I don't think Texas should ever do anything following California. I don't think we should make any policies because California's leading on that, that's for sure. I can tell you whether it's the impact of criminal justice, the tax revenue we could get from it, clearly I think most people agree that we should legalize marijuana. Being a veteran and being in a community where people suffer, whether it's from high suicide rates, or PTSD or the opioid epidemic, this is something that marijuana could help in every chapter. And the reason I think it needs to go beyond medical is that most veterans are not self-identifying and seeking treatment and doing the necessary things that it would take to actually get a prescription."

"I absolutely support legalizing marijuana. In addition, I want to make sure we're looking at the long-term harm the drug war has caused hundreds of thousands of people in our country, especially communities of color. John Boehner sits on the board of a cannabis investment corporation. He is now profiting off of this very same product where people are sitting behind bars across this country, including in states where marijuana has been legalized. We need an immediate review of all of those cases as we legalize marijuana and also make sure how we invest in communities that have been truly underserved by the War on Drugs that we all know has been a racist war on drugs as well."

"I do believe that we should legalize marijuana, but I also think we need to ... make sure that our banking practices are consistent. Right now, for some states that allow for the use of proceeds from the sale of marijuana you can't bank in a separate bank or one that might have national scope, so we need to make sure that our banking laws will allow that interstate commerce to take place in a manner that is consistent with the way in the direction that the country is heading with its marijuana laws that exist to date."

"I can say as probably I'm the only one up here who has ever smoked marijuana. I absolutely support the legalization and decriminalization of marijuana at a federal level. And ensuring that we do attack this war on drugs head-on and repealing the crime act, which has disproportionately targeted communities of color and incarcerated more black and brown bodies than white counterparts for the same crime of smoking marijuana. So hey, do it. Let's free the weed."

RELATED: Early voting guide: Where and how to vote in Central Texas

Texas voters can cast their ballots early for the Texas primary election from Feb. 18 through Feb. 28. The Texas primary will take place on Super Tuesday, March 3. On the ballot for the U.S. Senate race will be 12 Democrats, Cornyn and four other Republican U.S. Senate hopefuls: Dwayne Stovall, John Anthony Castro, Mark Yancey and Virgil Beirschwale.

Meet the Texas Democrats running for US Senate