Proposition F allows voters to choose whether the City of Austin should adopt a "strong mayor" form of government. 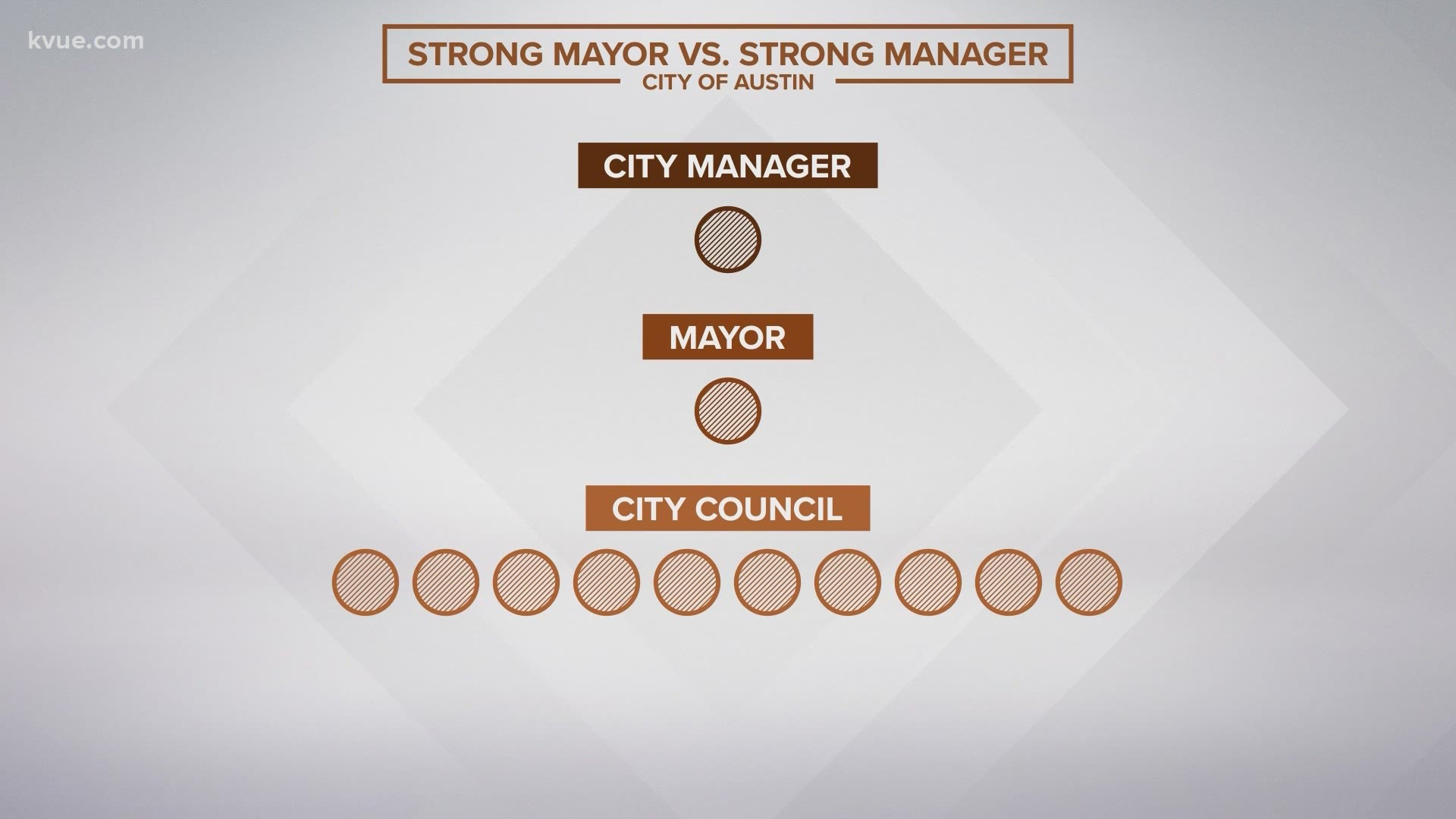 AUSTIN, Texas — Austinites will soon head to the polls. Early voting for Austin’s May 1 election begins on Monday, April 19, and runs through Tuesday, April 27.

One major item on the ballot is Proposition F, which will allow voters to choose whether the City of Austin should adopt a “strong mayor” form of government, getting rid of the city manager position. It’s a form of government proponents believe would work better as Austin continues to grow, but one that a majority of current councilmembers oppose.

What is Proposition F?

Prop F, if approved by voters, would eliminate the city manager position and make the mayor’s position more powerful. It would give the mayor veto power and the ability to hire or fire most department heads and direct staff. It’s a type of government often referred to as the “strong mayor” system or “mayor-council” system.

Right now, Austin's city government operates under what is called a "council-manager" form of government. There are 10 city council members, who each represent a district, and the mayor, all of whom are elected officials. A city manager is employed by the city government, appointed by the city council. They carry out the council's policy objectives and are in charge of big areas like the city budget.

If approved, the change to the City’s form of government would not start until 2023.

Because the passage of the proposal would mean the mayor would no longer have the power to vote on any matters before the council, it would lead to an even number of council members, creating the possibility for voting deadlocks. In order to address this, a separate ballot measure, Proposition G, will also be decided by voters on May 1. It would add an 11th council district to maintain an odd number of voting members.

Why it’s on the ballot

Local group Austinites for Progressive Reform (APR) got the measure on the ballot after filing a petition with 24,000 signatures. The group argues Austin's current system is linked back to a charter revision campaign from 1924 by Monroe Shipe – the developer of Austin's Hyde Park, which, at the time, was said to be advertised "for White people only."

Nelson Linder, president of the NAACP in Austin and the co-chair for APR, said the mayor-council system would ensure checks and balances while forcing the mayor to cooperate with the council. He told KVUE he believes the system is more democratic because it eliminates the unelected city manager position.

But the measure has faced opposition from all city councilmembers except Paige Ellis, who has not publicly stated her position. The group Austin for All People is pushing back against the measure because it says those who live in Austin would end up having less representation on the local government level if Prop F is approved. Nico Ramsey, the director of community engagement for the coalition, said the benefit of a city manager position is that it’s not partisan.

"They're administrative professionals that know how to run a city," he told KVUE.

According to a sample ballot on the Travis County clerk's website, the final ballot language for Prop F is:

Shall the City Charter be amended to change the form of city government from 'council-manager' to 'strong mayor-council', which will eliminate the position of professional city manager and designate an elected mayor as the chief administrative and executive officer of the city with veto power over all legislation which includes the budget; and with sole authority to hire and fire most department heads and direct staff; and with no articulated or stated charter authority to require the mayor to implement Council decisions?

Voters have the option to vote "for" or "against" the proposition. A vote for the proposition is a vote in favor of the “strong mayor” form of government.